Lynn Bowden Jr. is the smartest player Vince Marrow has seen at UK

Not only is Lynn Bowden perhaps the most versatile football player ever at Kentucky, but recruiting coordinator Vince Marrow says there is one other intangible he has that is normally overlooked.

“He is the smartest player we have ever had at UK,” Marrow said. “He was definitely a team guy, too. Both Benny Snell and Josh Allen got a lot of credit last year but Lynn wants to win for this state and this university. He put us on his back. That’s why he’s playing in the Belk Bowl. But he’s also smart enough to figure out how to make it all work.”

Bowden earned first-team All-American honors and won the Paul Hornung Award given to the nation’s most versatile player after moving full-time from receiver to quarterback in game six and leading UK to a 5-2 finish. The put UK into the Dec. 31st Belk Bowl against Virginia Tech in what will be Bowden’s final game before he heads to the NFL.

Bowden was regarded as one of the best, if not the best, athletes ever to come out of Youngstown, Ohio — a hotbed for football. Yet his academics and other issues scared some teams. Not Kentucky.

“He’s a very misunderstood kid,” Marrow said. “He’s probably my favorite guy off the field, too, but sometimes people can  judge you by what they hear and your tattoos.

“He’s probably the cleanest guy you could have on your team. He doesn’t hang out. He doesn’t go to bars. The night he rushed for over 200 yards against Louisville a lot of guys were celebrating but he was staying home with his son.”

Bowden even forced Marrow to change his thinking.

“I literally learned that you don’t judge a book by its cover,” Marrow said. “I got caught early in the recruiting process thinking some negative t things until I got to know him as a person. I was wondering, ‘Do we want to recruit him?’ Thank God we did.

“He’s one of the nicest guys ever. Did he have an attitude? Of course he did because we told him he would get the ball. He learned his freshman year how to change that and it was a big learning curve. We are very thankful for how he pushed our team.

“Some people shut it down if they get upset. Not him. He’s an ultimate competitor. He may tell you how he is feeling but when it comes to competition, he plays. He could play defensive back and would compete. He never once let us down on the field and he’s just a special, special guy for so many reasons.” 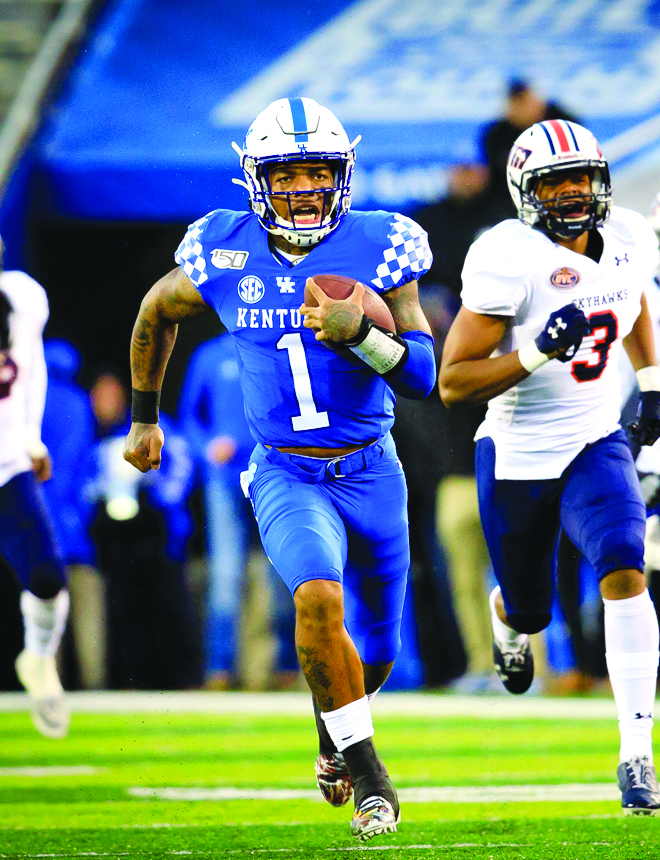 Not only is Lynn Bowden a versatile player, but UK recruiting coordinator Vince Marrow says he is the smartest player he’s seen at UK. (Jeff Houchin Photo)

It was during her sophomore season when UK volleyball star met basketball player Nick Richards at a party. Edmond said she just kind of “hung out” with the freshman before he finally asked, “Do you want to date?”

Now they have been dating for two years.

Yet when it came time for her volleyball senior day, there was Richards walking out with her and her parents and being introduced as Edmond’s boyfriend.

“It was kind of weird to be honest. I thought he would be like, ‘No I don’t want to go out there.’ But he was willing to go out there for me and I really appreciated it. It was not the best situation for him because he does not like being out in public if he does not have to be.”

Edmond was an all-American and two-time SEC Player of the Year while Richards struggled for consistency his first two seasons. However, Edmond said having Richards to talk to and just watch was a blessing for her.

“Sometimes he just puts things in perspective for me. Sometimes I feel like I am dealing with a lot and I know he is on a bigger scale. He’s under a tiny microscope where he can’t really do anything without everybody knowing,” Edmond said.

“It’s not really the same for me or at least not anywhere close to the same level. I think sometimes it humbles me when I see his work ethic with him being in the gym all the time. I think for me it was frustrating to see how much he was in the gym and it wasn’t transferring to the court for him when I was not in the gym as much as him and things were coming easy for me.

“I think there was a sense of regret and humbleness to where if he was working that hard, there’s no reason I can’t do that too. So he has pushed me to open up my eyes and look to hard work more than just my given talent. He made me a better player just because I started trying to work as hard as he has for the last two years.” 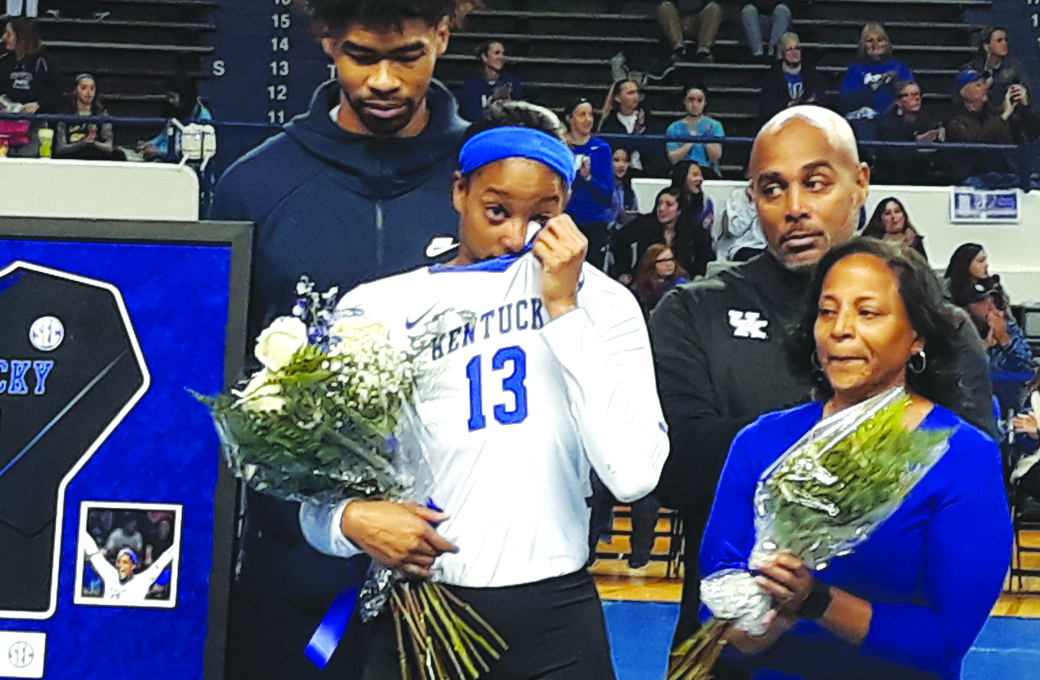 Kentucky volleyball star Leah Edmond (13) says her boyfriend, Nick Richards, was an inspiration for her because she saw how hard he was working to improve as a basketball player. (Vicky Graff Photo)

Kentucky’s 2020 football signing class could be the best talent-wise that coach Mark Stoops has signed at UK and what should really bode well for the future is the talent and depth in the offensive and defensive lines.

“I think it’s a really good class  if you’re looking at the O-line and D-line. Offensive line with five guys and five quality players there.   And then defensive line we have three, if you put Sam (Anaele) in that group, who is a really big guy, much like a Josh Allen, you have four along the front right there,” Stoops said. “It’s really a strong class with our front guys.

Stoops said UK went into the recruiting class knowing it needed to bolster numbers in the offensive line and did with R.J. Adams, Deondre Buford, Josh Jones, John Young and Jeremy Flax.

No surprise that offensive line coach John Schlarman played a huge role in getting both depth and quality based on what UK’s line has done the last four years.

“He’s more of a teacher and that’s how I learn. The physical aspect of football has never been hard and the mental part has not been bad but believe he’ll just make it even easier for me because he’s just a genuine person,” Flax said.

Adams said Schlarman is “really cool” and a family guy that he liked.

“I can relate to him and his coaching style. I like coach Stoops, too. He is smart and he can teach me a lot. They never backed off me but I really, really like coach Schlarman,” Adams said.

Quote of the Week: “We miss the intangibles that (Nate) Sestina brings to this team. We have not yet played to the level of purpose, chemistry and spirit that we showed against Michigan State. Team has work to do for sure with some aspects keeping me optimistic,” former UK point guard Roger Harden on John Calipari’s team.

Quote of the Week 2: “You have to be very talented to change positions in the middle of the season, especially if you’re going to play quarterback. It’s impressive what he did this season. I think playing quarterback will help him in the draft. It shows he’s willing to play anywhere to help his team win,” former NFL star Paul Hornung on UK junior Lynn Bowden winning the Paul Hornung Award given to the nation’s most versatile player.

Quote of the Week 3: “For our next one, we are toying with the idea of one on (John) Calipari and his years at Kentucky or maybe coach (Joe) Hall. Whatever it is, we are looking at doing it in March or April,” former UK basketball player Cameron Mills on what his next Kentucky basketball documentary might be.