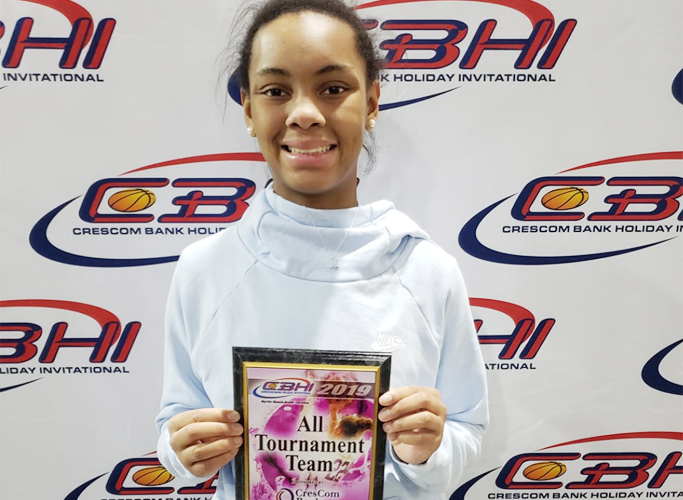 Mercer County freshman Timberlynn Yeast is pictured with her All-Tournament Team trophy after her performance in Myrtle Beach. (photo submitted)

After going 5-1 through their first six games, the Mercer County Lady Titans travelled to Myrtle Beach for the Crescom Bank Holiday Invitational, Wednesday through Sunday, Dec. 18-21.

Freshman Timberlynn Yeast was named to the All-Tournament Team after averaging 21 points, 9 rebounds and 3 steals per game during the tournament.

“She’s just a super active player and to be just a freshman and to be able to compete at this level is unreal,” said Head Coach Hayley Spivey. “She rose to the occasion and wasn’t intimidated. I told her that is something she is going to have to get familiar with if she wants to further her career at the next level. She’s just a super athlete and she’s really good at figuring out ways to score and is active on the defensive end.”

Here is a recap of their four games.

In their fourth and final game, the Lady Titans dropped their third game of the season against the St. Francis Knights by a final score of 79-64.

Yeast was the top scorer with 22 points while also hauling in seven rebounds and dishing out three assists.

Senior Channing Lewis was the other Lady Titan in double figures with 17 points to go with six rebounds and three assists.

Despite the loss, Lewis and Yeast have been the play makers for Spivey and the Lady Titans through 10 games so far this season.

“They (Yeast and Lewis) have done a pretty good job of figuring out and depending on each other. They are two of our key scorers and for them to be able to feed off of each other and do that together is really good. They play well together. It’s so different just to have that freshmen that can do it and a senior that can do it. It gives you a cool dynamic.”

The Lady Titans got down by as much trailed by seven at halftime but the Knights were able to hold on for the win in the second half.

Junior Ry’Ann Tharp was the top scorer off the bench for  the Lady Titans with nine points.

Spivey said she was proud of her team’s free throw shooting, 18-of-21, after struggling the first few games of the tournament.

“It was good to end the tournament with a good showing from the free throw line after our previous struggles,” she said.

Freshman Anna Drakeford, who Spivey said is one of the most improved players on the team, gave good minutes at point guard throughout the tournament.

“She’s just improved a lot and has been playing really well for us at point guard,” said Spivey. “She will be a very important player for us down the stretch.”

In their third matchup of the week, the Lady Titans earned their second win in a row, defeating the Myrtle Beach Seahawks by a final score of 50-29.

Timberlynn Yeast was the top scorer, scoring 27 out of the 50 Mercer County points, to go along with nine rebounds and six steals. Yeast was the only Lady Titan in double figures. Lewis was the next closest with nine points to go with four rebounds.

“Our girls did what we asked them to do and I was proud of them,” said Spivey.

Senior Zoë Yeast has pleased Spivey with her battle on the board, totalling nine rebounds against Myrtle Beach, and hauling in 28 rebounds in four games.

“She (Z. Yeast) has battled for us all year and she provides a great presence for us in the paint,” said Spivey.

In their second matchup of the week, the Lady Titans earned their first win of the tournament after opening up the invitational with a loss. They defeated the McEachern Indians by a final score of 58-49.

Timberlynn Yeast was the top scorer with 21 points to go with 15 rebounds and 3 assists. Lewis was the other Lady Titans with over 10 points with 15 points to go along with nine rebounds and two assists. Junior Stevie Shepherd scored nine points, including hitting one out of the two three-pointers for the Lady Titans.

Mercer County’s bench play was big in this one. Tharp scored six points off the bench and Spivey was pleased with our her bench players were able to make an impact. Sophomore Love Mays, who has been playing through injury, was big off the bench in the four games.

“That’s huge for us. We had a really good team wins here where everybody was contributing and had some big games for us,” said Spivey. “Love (Mays) was injured early on and she is kind of getting back in the swing of things.”

After reaching Myrtle Beach at 3 a.m. early Thursday morning, the Lady Titans played their first game of the invitational just nine hours later, falling to the Oak Ridge Wildcats by a final score of 62-49.

“Fatigue was a factor. Just travelling all day and that day prior,” said Spivey.

Despite battling fatigue, the Lady Titans fought and cut the Oak Ridge lead to seven in the second half after trailing by 21 points earlier in the game.

Lewis was the top scorer with 19 points. Shepherd scored 10 points to round out the double-digit scoring for Mercer County. Shepherd hit two out of the five three-pointers for the Lady Titans. Lewis hit the other three.

Yeast, Mercer’s leading scorer coming in, was held to 8 points on 3-of-10 shooting.

Spivey said she would like to see her team’s three-point shooting improve over the next coming weeks.

“The percentage isn’t bad, but I would like to see us hit almost seven or eight a game,” she said. “Because we are a pretty quick and athletic team. In order for us to get to the rim like we do, we need people to hit threes to pull the defense out. 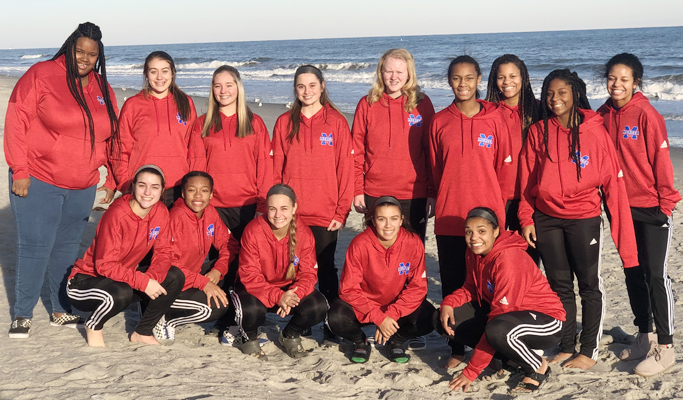 The Mercer County Lady Titans basketball team is pictured at Myrtle Beach during their trip for the Crescom Bank Holiday Invitational from Wednesday-Sunday, Dec. 18-21. Mercer County went 2-2 during their four games. (photo submitted)