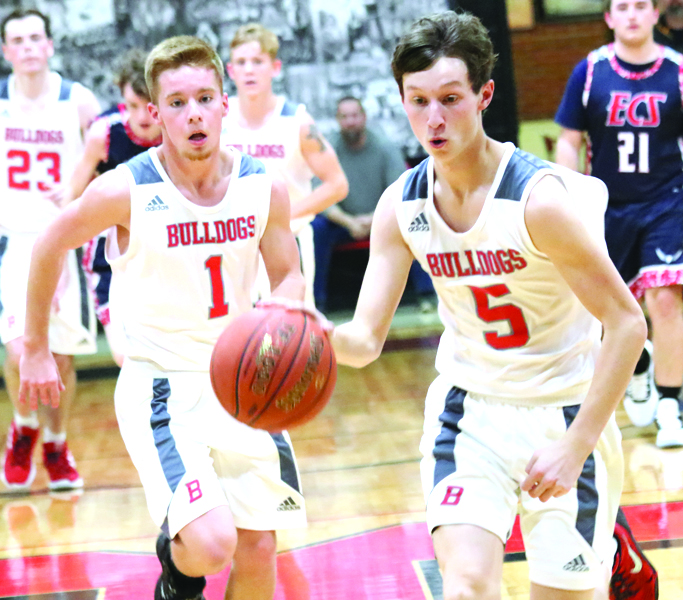 Burgin junior Evan May (5) leads the fast break against Evangel Christian on Tuesday, Dec. 17. May had a season-high 8 points in the win. (photo by Arpan Dixit)

It took a few weeks, but the Burgin Bulldogs (1-7) got that first win for new Head Coach Troy Lee Thomas after defeating the Evangel Christian Eagles (1-2) by a final score of 71-61 on Tuesday, Dec. 17, at Burgin High School.

“I guess where I’ve been doing it for so long, I’m just really happy for the guys,” said Thomas. “It’s been tough on them and as a coach you have to be positive. I’m just real proud of them. I thought our effort was really good throughout the game.”

One goal the Bulldogs have each game is to take four charges on defense. Burgin took three and Thomas was pleased with the effort all around.

“I’m thrilled to death that we took three,” said Thomas. “I thought our rebounding was also very good tonight.”

The Bulldogs out-rebounded the Eagles 41-28.

“A couple things that we lacked is that we don’t execute very well and don’t recognize defense a lot yet,” said Thomas. “Those are things you improve throughout the year as the season goes.”

Senior Wesley Tyler had his best game of the season, scoring a team high 16 points and hauling in 14 rebounds. The Bulldogs need Tyler to be the aggressor on most nights and develop consistency. Tyler definitely took a step in the right direction against the Eagles.

“I didn’t know he had that many until looking at the stats after the game. That’s great,” said Thomas. “I know we played him a lot tonight and I didn’t want to do that but the reason why was because our matchups were bad.”

The Eagles got off to a very strong start in the first quarter with their leading scorer, Nick Cruse, firing triples from every side of the court. Cruse scored 25 points and hit four triples in the first quarter. The Bulldogs trailed by five points, 20-15, heading into the second quarter.

Burgin started off hot, going on a 12-1 run to start the second. Junior Evan May had his best game of the season, scoring all eight points in the period, with six of them coming off two triples.

“It’s the best Evan (May) has played all year. That’s the thing I want him to be is a defender first,” said Thomas. “He’s got a long frame and can really do some stuff. We still make unforced errors as a team and that hurts us. Our margin of error has to be really small.”

The Bulldogs were up five at halftime with Tyler leading the way with seven points and five rebounds.

Tyler hit his first three to start the second half and the Bulldogs were off and running.

Junior Jackson Qualls had one of his best games of the season, filling up the stat sheet. One of the veterans on the team, Qualls scored 13 points, hauled in four rebounds and dished out four assists.

“He (Qualls) did a really good job of attacking the rim. He hit some tough shots that we needed,” said Thomas. “What I want Jackson to do is recognizing the defense when it comes at him to be able to pass it and find open teammates, and he’ll get better as the season goes on. I was really pleased how he shot free throws.”

Thomas wasn’t lying, Qualls hit some timely shots when the Eagles were making a second half surge. Jackson’s brother, freshman Jacob Qualls, was also in double figures with 12 points. He hit a big shot in the fourth quarter to put the Bulldogs up five with four minutes to play. The Bulldogs used defense and free throws to secure their first victory of the season.

Junior Skylar Logan also had one of his best games of the season, Thomas said.

“Skylar (Logan) brings a ton of energy and he had a good game for us tonight,” said Thomas.

Burgin got contributions from almost everybody in the lineup, with seven of the 10 players that played scoring over five points.

“We had good balance and that’s key. When you get guys who average those types of numbers, you’ll be successful,” said Thomas.

Burgin will be back on the floor today, Thursday, Dec. 26, in the Williamstown Holiday Tournament against Paris at 3 p.m. 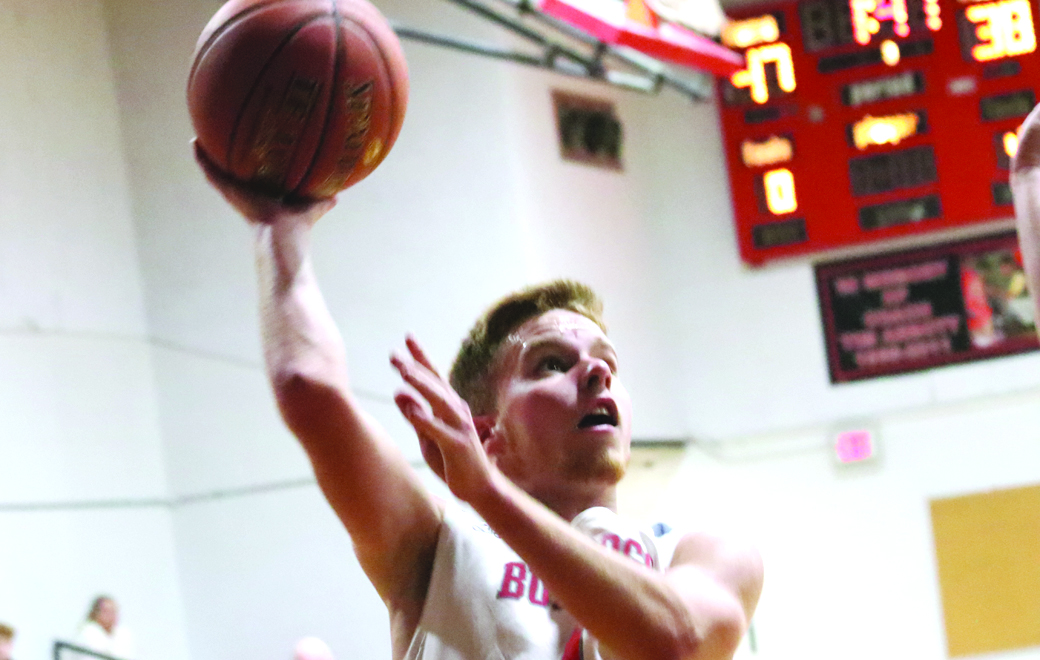 Burgin junior Jackson Qualls drives in for two of his 13 points against the Evangel Christian Eagles on Tuesday, Dec. 17. (photo by Arpan Dixit) 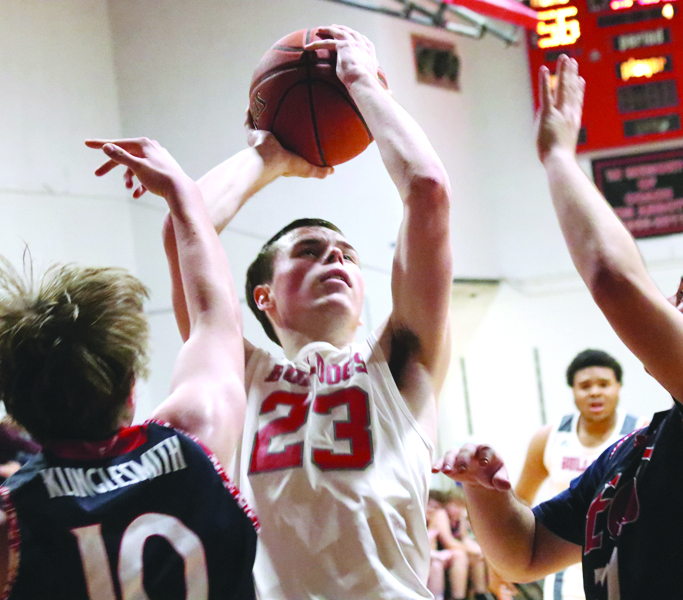 Burgin senior Wesley Tyler (23) shoots up and over a couple Evangel Christian defenders on Tuesday, Dec. 17. Tyler finished with 16 points. 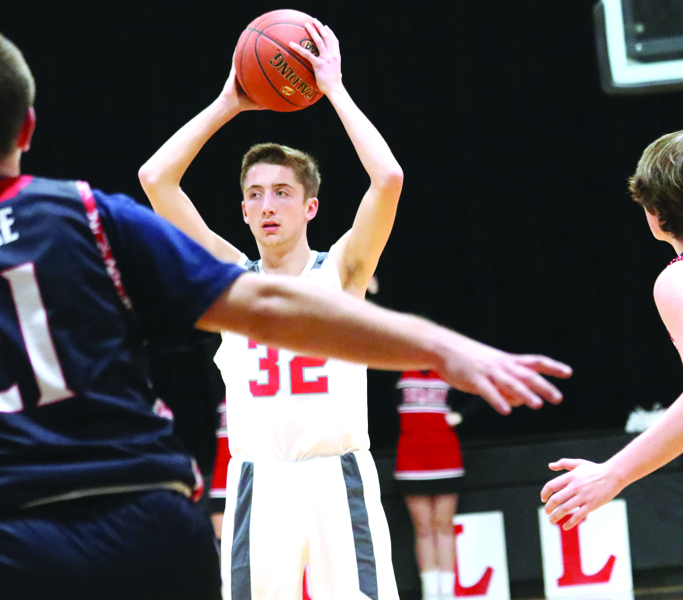 Burgin sophomore John Boursaw holds the ball at the top of the key and looks for an open man against Evangel Christian on Tuesday, Dec. 17. (photo by Arpan Dixit)