Buchanan: “This award is a reflection of our staff and players” 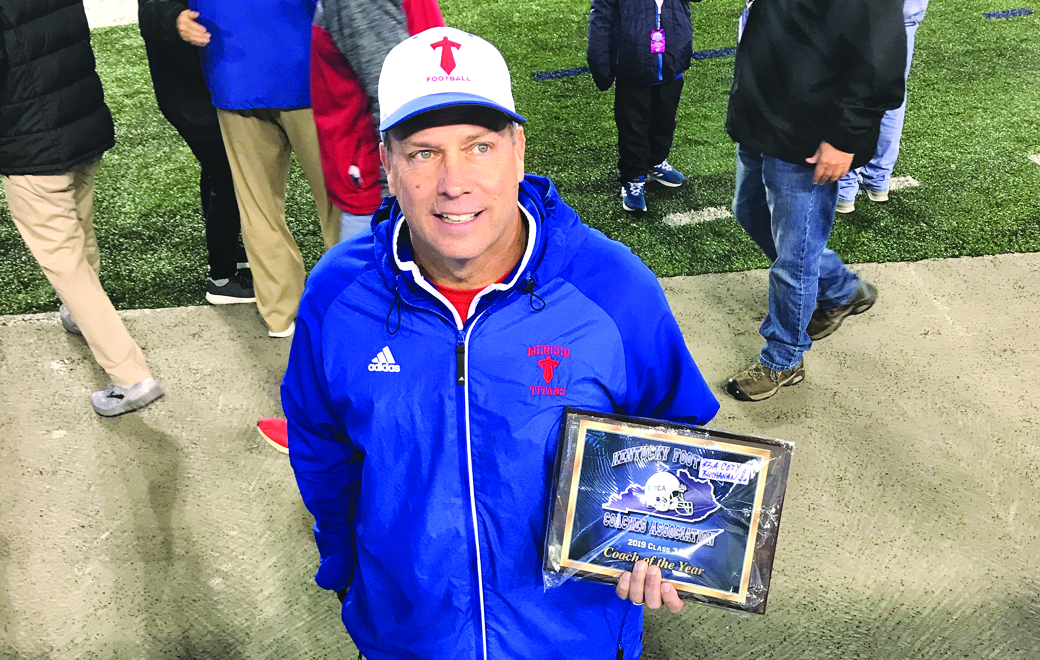 Mercer County football Head Coach David Buchanan smiles and poses with his Class 3A Coach of the Year Trophy at Kroger Field during the state championships. (photo submitted)

The Mercer County Titans football team is coming off an 8-3 season, their first eight-win regular season since 2006, and their coaching staff is getting rewarded for it.

Head Coach David Buchanan, who just completed his fifth season as the head man for the Titans, was named KHSAA Class 3A Coach of the Year during the KHSAA football state championships in early December.

“It means a lot to me, but coach of the year awards are a reflection of your staff and your players, without a doubt,” said Buchanan. “I’d also add being voted on that by your peers and guys that you coach against is especially meaningful because there are tremendous coaches in this state. My Dad is an old high school football coach in Kentucky. I love Kentucky high school football. That certainly makes it very meaningful for me.”

Donald Wayne Smith, Brian Rowland, William Harris, Josh Painter, Graham Heasley, Mark Huffman, Chris Crawley-Goodman, Brian Sims, Tommy Craig and Wesley Bird make up the assistant coaching staff for the Titans and Buchanan was very appreciative of his staff and what they’ve been able to do in terms of developing the younger kids and getting them prepared for Friday nights.

“I told our staff that I thought they did as good a coaching job as I’ve seen in my time around football, and that’s a long time,” said Buchanan. “When they had individual work time with their individual positions, I thought they did a really good job of teaching specifically what our guys needed to do and reinforce those things. I thought our staff was really good at getting those pieces of fundamentals to fit into a scheme that would work for the whole team.”

Buchanan said he and his staff adjusted their Mondays during the week to add individual periods.

“You don’t restructure and add individual periods unless you have great assistant coaches that it’s going to be productive,” said Buchanan. “We added that and I really think that helped us to improve through the season.”

Buchanan gave his final thoughts on the season.

“I think the thing that is going to stick out to me is the gap between us, CAL and DeSales last December was ridiculous,” he said.

Perceived as the “group of death” by many, the district was one of the toughest in the state and Buchanan said playing in this district year in and year out will be beneficial to the Titans at the end of the season.

“It really started last January. As a staff, we said what are things that are a deficiency right now? We started to work backwards,” said Buchanan. “This year with perfection workouts, we said what are the problems we have to fix? Perfection workouts are coaches focused on problems that had to be fixed. For example, one of the things we had to fix was our jail break screen and our sprint pass game. Well, a jail break screen to Dillon (Warren)  was a touchdown with less than a minute to play in the CAL game at the half, but I thought our staff and our kids did a super job of just improving by leaps and bounds from last December till we took the field that following September.”