Stark to come on staff as assistant to HC Paul Brooks 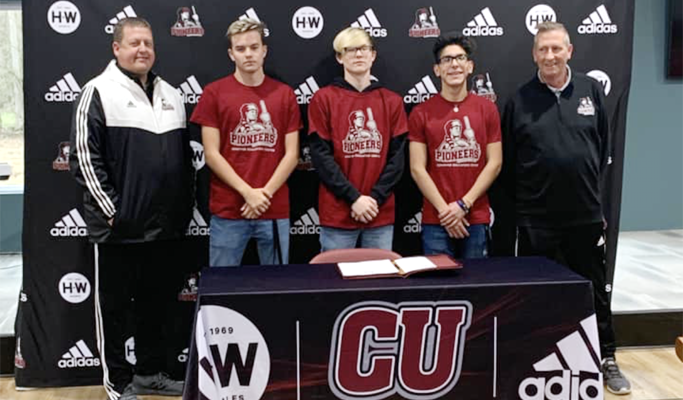 Familiar faces have been added to the Campbellsville University-Harrodsburg men’s soccer program, who will be heading into their inaugural season in the fall of 2020.

Nate Randall and Hunter Booth are currently seniors at Mercer County Senior High School. Angelo Ontiveros and Kola Raskin, 2018 graduates of MCSH along with Denson Jenkins, a 2017 graduate, all signed their letters of intent to play soccer at CU-Harrodsburg and become Pioneers on Monday, Dec. 9.

What makes it even more special is playing for their former high school coach, Garrett Stark, who recently took a position as assistant coach for the men’s and women’s Pioneer soccer program.

Stark will continue to coach Mercer County as well.

“It’s going to take a few years to obviously build up the new program here,” he said.

“Obviously, I have a lot of ties in the area with soccer so I’m helping him recruit players on the men’s and women’s teams, while also helping as an assistant coach,” said Stark.

This is Stark’s first time coaching at the collegiate level.

“It’s exciting. This is obviously something that I’ve wanted to do for years,” he said.

Stark’s daughter recently graduated from high school and that opened up some free time.

“It’s freeing me up a little bit more for travel which is why I stayed away from the college level in years past,” he said. “It’s exciting here with both programs starting from scratch and having brand new facilities. It’s exciting for the community here in Harrodsburg.”

Stark said it was an easy sell when having conversations with CU-Harrodsburg Athletic Director Dalton Christopher.

“I explained my background to him in soccer and I’m looking forward to working with Dalton and Coach Brooks,” said Stark. “I heard about Coach Brooks for many years, but never knew him so it’s been exciting getting to know both of them.”

Two seniors at Mercer County Senior High School gave their thoughts on what it means to be able to stay home and play for a coach that they are already familiar with.

“It’s amazing to still have Stark on my sideline even though he is an assistant coach,” said senior Nate Randall. “The chemistry with Coach Stark and the Mercer County alumni will be incredible and I can’t wait to see what Coach Paul Brooks has to offer.”

Senior Hunter Booth, who led the Titans in scoring this past fall, echoed Randall’s comments.

“It’s a dream come true. This will boost my confidence all the way up for the season because I know what is expected,” said Booth.

Kola Raskin and Angelo Ontiveros, who graduated from Mercer County in 2018, were excited for the opportunity to see familiar faces at the college level. Raskin said he took a break from soccer after graduating, but started to get back into shape after receiving a call from Stark.

“At first, I wasn’t doing much other than being like any other person who graduates and kind of forgets about playing anymore. But after I got a text from Coach Stark, I got right back into the groove and started working out,” said Raskin. “It was an honor to play for him (Stark) in high school and he was by far the best coach I ever had. To think he will be coaching me in college is just a dream come true. He has been nothing but the best on and off the field for all his players. I believe it is a big advantage to have a lot of guys that played for him in high school to be playing for him in college.”

Ontiveros, like Raskin, recently got back into training and couldn’t be more excited for the opportunity to be a Pioneer.

“It was more of self-training and trying to better myself as an individual player both physically and mentally during my time away from the game,” said Ontiveros. “It’s very cool knowing that even with a fresh start, we’ll know what to expect from Coach Stark and he will already know what we’re capable of.”

The final signee, Denson Jenkins, graduated from MCSH in 2017 and continued his soccer career at Midway University while also being an assistant to Stark for the Titans. Jenkins is excited about transferring back home and is looking forward to taking a leadership role on a new team.

“I learned a lot at my time in Midway and experienced all the ups and downs of a college team in three short years. I was blessed to play with several fantastic players from around the world,” said Jenkins. “I had to learn how to be a leader during success and during failure which is something I hope to bring to the table in my role at CU-Harrodsburg. To say I’m excited would be an understatement. The success we had at Mercer County during my high school days under Coach Stark is something I know we can translate even at a first year program. Stark has the area’s best interest at heart and he’s one of the best coaches in the state. I’m blessed to call Stark and Brooks my mentors on the coaching side of things and to get to play and help build a program from scratch with the both of them.”

All five signees have experienced success, winning 12th Region titles and competing at the state level during their time as Titans.

“One thing I’ve learned coaching at the high school level is every year you lose your seniors. Those guys go away and do other things so it’s nice to be back with these guys and being able to coach them again. Denson (Jenkins) is transferring in so it’s good a have an older player on the team with college experience to kind of talk to the younger guys coming up,” said Stark.  “Kola (Raskin) and Angelo (Ontiveros) were here locally. This is a great opportunity for them to get their education and play soccer at the same time. Obviously with Nate (Randall) and Hunter (Booth) being current seniors this year, it’s great that they have an opportunity to stay local and continue to play and get their education.”

The Pioneer season will match up with the Titans season, but Stark said he is up for the challenge.

“The college schedule is not complete yet. A lot of those games tend to be afternoon games because a lot of schools don’t have lights,” said Stark.

Fortunately for the Pioneers, their new field on campus will provide lighting.

“We will be able to host evening games but we feel confident that the scheduling will match up pretty good to help get this program going but also keep my commitment with the high school,” said Stark.

“It’s generally rare for student-athletes to be able to represent their home town at the collegiate level, yet alone five at once,” said Brooks. “This is extra special as it allows them such a rare opportunity and for us, as a new school in the area, and as a brand new program to instantly build valuable community relations.” 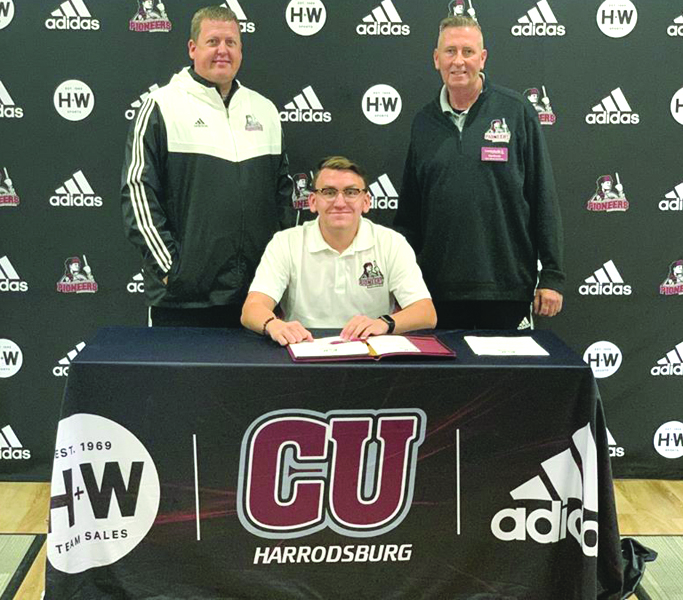 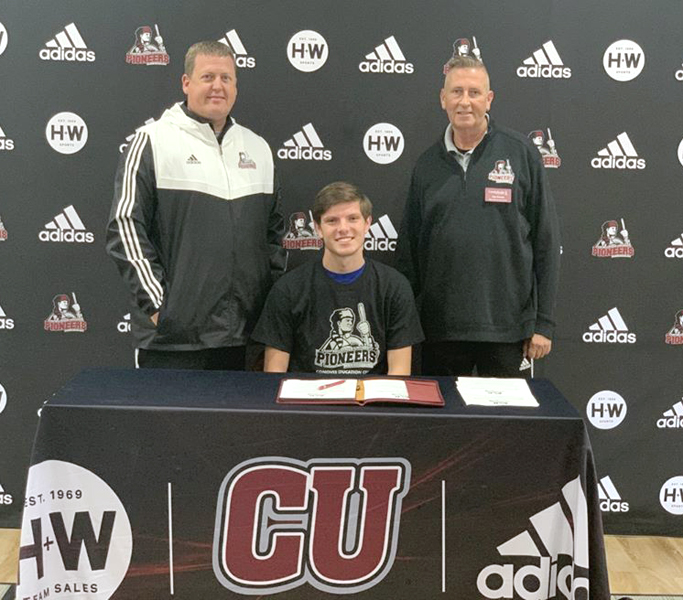