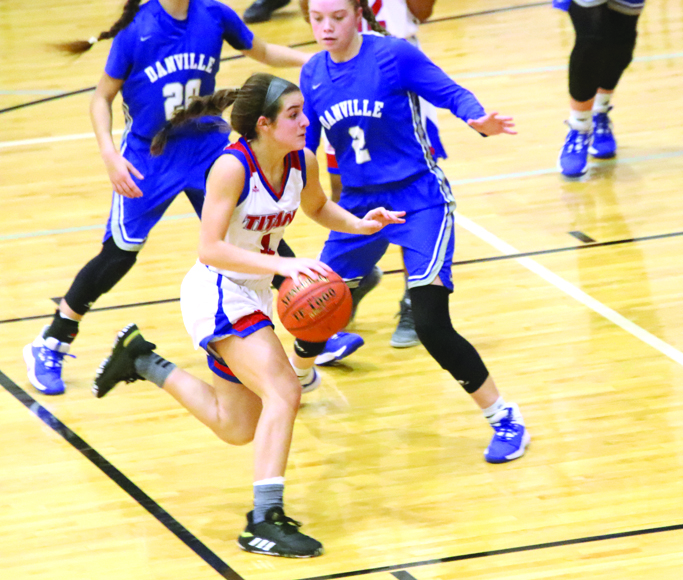 Mercer County freshman Anna Drakeford drives to the basket to score two of her 15 points in a double digit victory over Danville on Monday, Dec. 16. (photo by Arpan Dixit)

At the end of last season, the Mercer County Lady Titans (5-1) suffered a tough loss to the Danville Lady Admirals (4-2) in the first round of the region tournament after Ivy Turner poured in 43 points to send the Lady Titans home early.

Fast-forward to 2019 and the Lady Titans got their revenge in an early season matchup in a 69-58 victory on Monday, Dec. 16, at Mercer County Senior High School in the first game of a boy/girl doubleheader.

“I watched the game from the region tournament last year and I had a feeling they might do something similar,” said Head Coach Hayley Spivey. “They’re going to pack it in, play a 2-3 zone and I told our girls it’s going to be hard for us to score. One of the biggest things from last year’s game was that they were able to take Timberlynn (Yeast) out of the game. We challenged her and she responded.”

The freshman, who leads the Lady Titans in scoring with 18 points per game, filled the stat sheet again with 18 points, 10 rebounds, six assists and five steals.

“She did a really good job of getting to her spots and making plays,” said Spivey.

Spivey has been talking about her team getting off to fast starts and they did just that.

The Lady Titans won the first quarter 21-12 after freshman Anna Drakeford’s 11 points in the quarter. Senior Channing Lewis added seven points in the first period including one of her team high four triples.

Drakeford only scored two points in the second half, but it was her big first quarter that gave Mercer County a little cushion heading into the second. Drakeford finished with 15 points.

“She may easily be our most improved player from this time last year to this year,” said Spivey. “She has really come into her role and she puts in the work.”

The second quarter was a different story. Danville came out the aggressor and were able to win the quarter 16-7. Lara Akers spearheaded the Danville run in the second. Akers led Danville with 12 points.

“We just struggled to score in the second quarter. Sometimes that is just a part of the game,” said Spivey. “But I thought we came out in the second half with way more energy and intensity.”

The Lady Admirals picked up where they left off at the beginning of the second half. They went on a 10-2 run to go up 38-30 before junior Stevie Shepherd hit her only triple of the game to cut the lead back to single digits.

“We were debating as a staff whether to call a timeout or not. I’m a big believer in letting them play through different situations as much as possible,” said Spivey. “I kind of hesitated in calling a timeout, but I didn’t and wanted to see how they responded to these types of situations early in the season. They responded well. Channing (Lewis) and Stevie (Shepherd) hit a three and had a couple fast break points. That wasn’t managed by me. It was all them.”

Senior Channing Lewis also had a big third quarter, hitting two triples to head into the fourth with 16 points.

“I was mad at her at the beginning of the game. She made a couple bad mistakes early in the game. She got that foul and I sat her for a while. I finally asked her if she was ready to play and she responded. That’s what seniors are able to do. They can bounce back pretty quick. I challenged her in the second half and she responded. I think that’s a testament to her maturity and just being a veteran basketball player.”

Lewis finished the game with a team high 21 points to go along with two steals. She hit back-to-back triples in the fourth quarter to give the Lady Titans a 55-46 lead with just under six minutes to play.

After senior Ariyana Rhodes scored her first two and Drakeford went coast-to-coast for a lay in, the Lady Titans had a comfortable 12-point lead with three minutes to play. They were able to hold on and secure their fifth straight victory after a season opening loss against George Rogers Clark.

“A timeout isn’t going to always bail you out. Sometimes you just have to buckle down and do it yourself,” said Spivey. “It’s good for some of our younger players. For as many juniors and seniors we have, we are still a really young team. I think it’s good for them to experience these moments.”

The Lady Titans will travel to Myrtle Beach for the Crescom Bank Holiday Invitational beginning on Wednesday, Dec. 18. 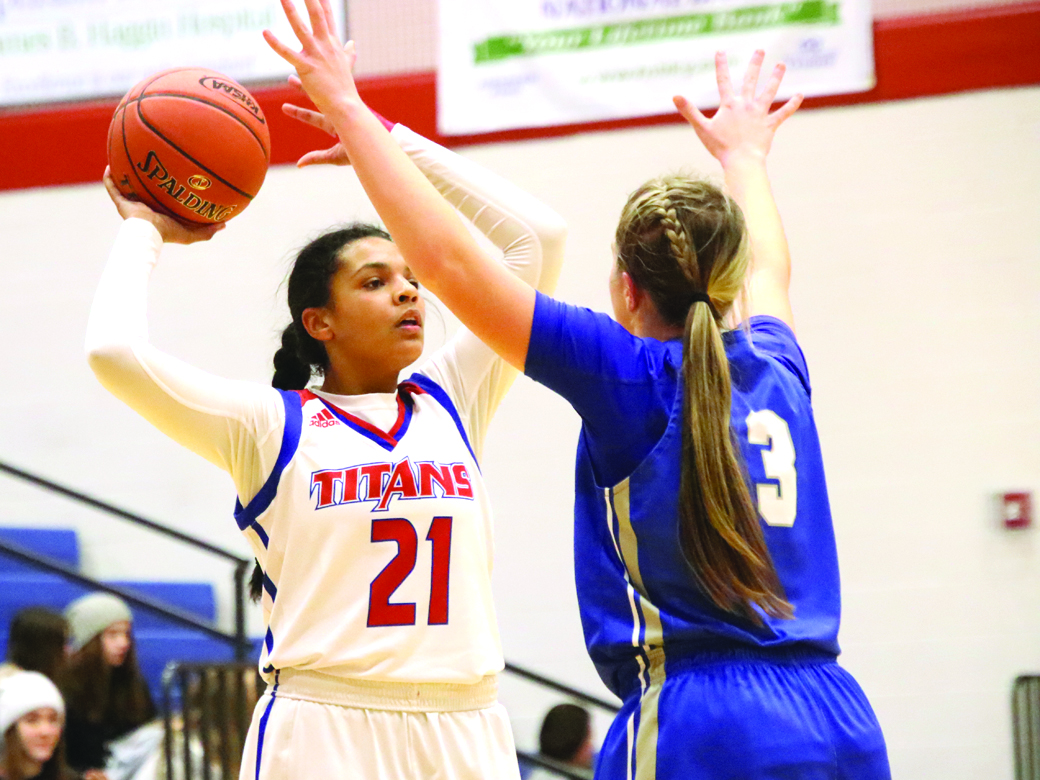 Mercer County senior Channing Lewis (21) looks for a cutting open teammate in a big early season win over the Danville Lady Admirals on Monday, Dec. 16. Lewis had 21 points in the victory and is averaging 15 points per game through six games. (photo by Arpan Dixit) 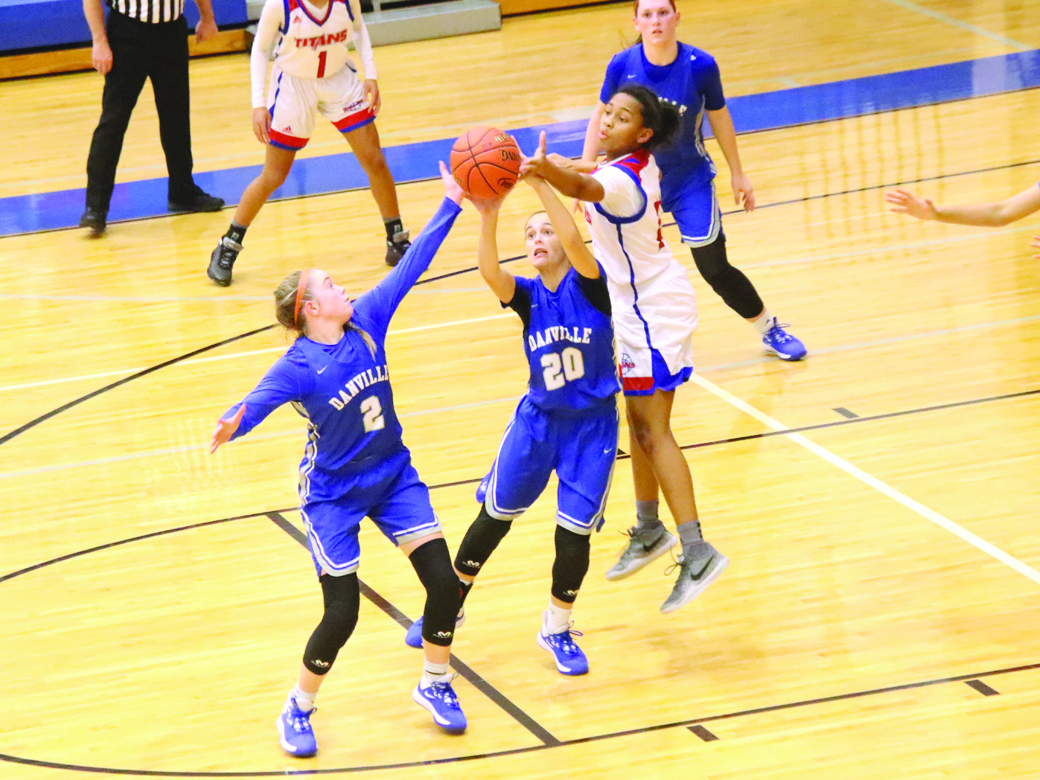 Mercer County freshman Timberlynn Yeast (right) leaps over Danville’s Lara Akers (2) and Ahyana Burnett (20) to get a loose ball in the Lady Titans’ 10-point victory over the Lady Admirals on Monday, Dec. 16. Yeast score 18 points, grabbed 10 boards and had 6 assists in the win. (photo by Arpan Dixit)