It has been a controversial year for Pioneer Man.

Locals were outraged when the state removed the fiberglass effigy of James Harrod from the intersection of College and Lexington Streets. They also complained on the Harrodsburg Herald‘s Facebook page about the City of Harrodsburg commissioning a new logo for Harrodsburg’s 250th anniversary, even though city officials have made it clear they do not intend to remove Pioneer Man from any signs.

Larry Catlett and the Friends of Fort Harrod want to provide Harrodsburg with a Pioneer Man who will stand for centuries. They envision a bronze statue of James Harrod gazing west, astride a horse with a rifle and a dog at his side.

But to get it, somebody’s going to have to dig deep. The statue as currently proposed could cost nearly $200,000 and take up to four years to build. The Friends of Fort Harrod would like to have it in place before Harrodsburg’s 250th birthday, which means a lot has got to happen.

“It’s probably a wish bigger than all of us, but I’ve been told to dream big,” Catlett said. 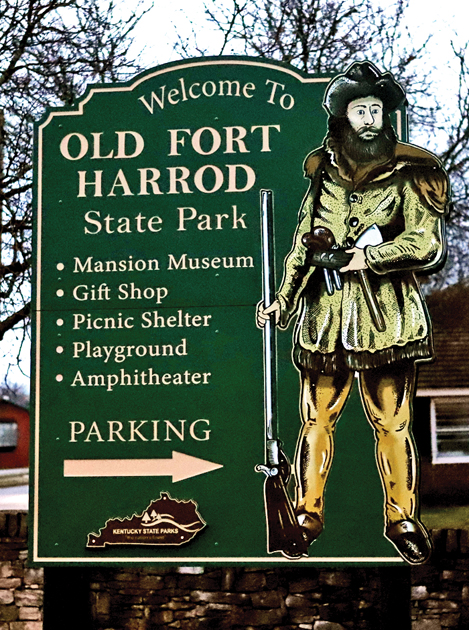 There are no surviving portraits of James Harrod and contemporary descriptions of Harrodsburg’s founder don’t agree on what he looked like. Larry Catlett said the artist hired by the Friends Of Fort Harrod will hunt down Harrod’s descendants in order to create a composite portrait.

The group has already hired an artist, Forest Boone, who claims direct descent from Daniel Boone, to create the statue. But creating a bronze monument is a laborious and expensive project. The horse by itself will cost over $100,000.

The group has already paid $500 for preliminary sketches. Catlett said it will cost $9,000 to create a miniature. And for that, the group needs the public’s help.

Catlett is a local attorney. In addition to leading Friends of Fort Harrod, he is a historical reenactor. He does not have kind words for many of the previous portrayals of James Harrod. He said he would love it if the bronze statue could replace the “cartoon sign” that currently stands at the intersection.

“The face shown on there is totally wrong,” Catlett said.

Despite Harrod’s importance to the founding of Harrodsburg and Kentucky, no one can agree on what he looked like. There are no known surviving portraits of the man and contemporary descriptions don’t agree with one another.

“Getting a likeness of his face is really troublesome,” Catlett said.

He said Boone is hunting down James Harrod’s descendants and creating a composite portrait.

“We think that’s the best thing we could do,” Catlett said.

Getting it right is crucial. You can paint over signs, but once it’s in bronze, it’s there forever. And that’s what Catlett and the other Friends of Fort Harrod want: a permanent memorial to Harrod.

“This statue will be here forever,” Catlett said. “It will be here a thousand years.” Catlett said donors’ names would be installed along the base of the statue, which would ensure their immortality along with Harrodsburg’s founding father.

It sounds impressive, but right now, it’s still just a wish. Catlett said the group is seeking corporate sponsors. But to get the statue in place before Harrodsburg’s 250th birthday, a lot of people are going to have to dig deep.

To make a donation, write to the Friends of Fort Harrod, P.O. Box 14, Harrodsburg KY 40330. Memo: James Harrod statue. Find out more about what the Friends Of Fort Harrod do on their Facebook page.