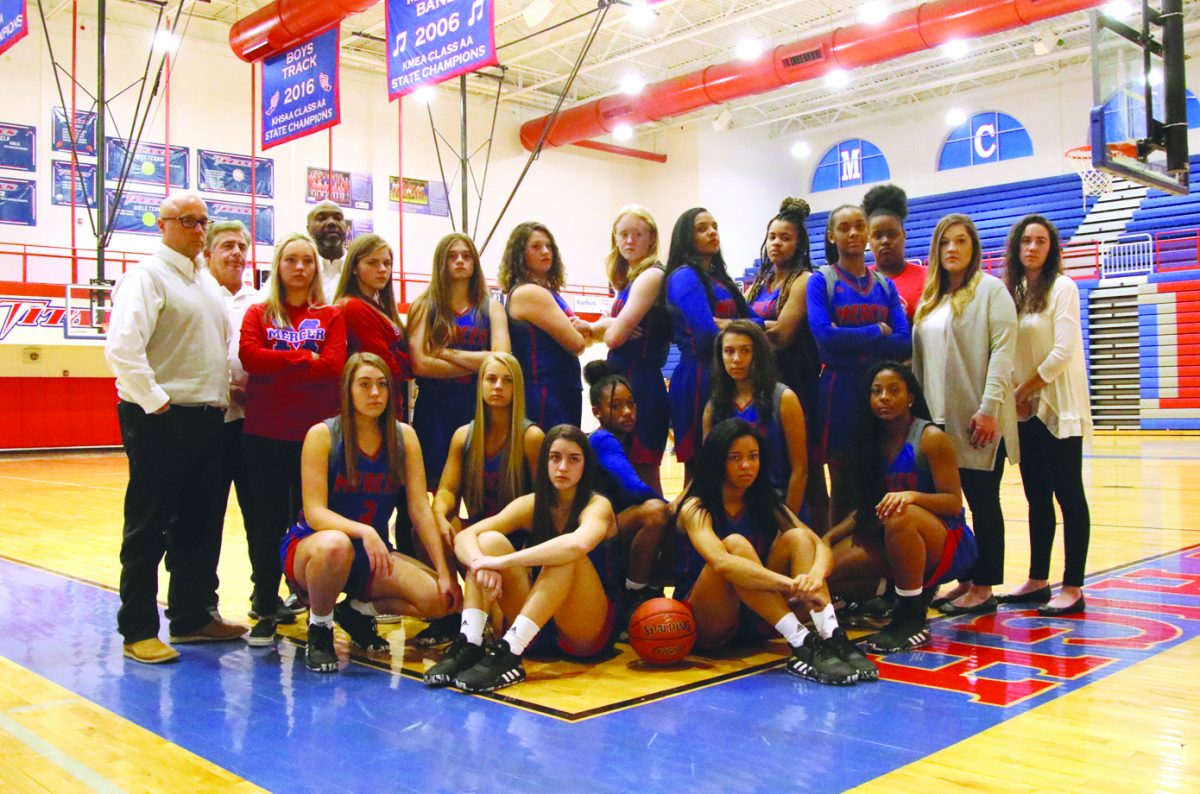 After four straight trips to the state tournament that included two state championships, the Mercer County Lady Titans basketball program took a step back last season, falling in the first round of the 12th Region Tournament for the first time since 2011.

After Chris Souder left the Lady Titans program after the second state championship team in 2018, his former player and assistant coach, Hayley Spivey, earned the title of head coach at the start of last season.

“I am doing some new things this year. We’ve got some new defenses that we’re trying to implement. We’re trying to do some different offensive sets. You have to change those things depending on what type of personnel you have,” said Spivey. “The biggest thing this year that we’re preaching is that we have to be player-led. We’re trying to pull that out of them right now and they’re responding pretty well. It’s been a process, but we’re getting there.”

The Lady Titans have four seniors this season that include Channing Lewis, Calicia Smith, Ariyana Rhodes and Zoë Yeast. All four of them bring a different dimension to the team.

“Four seniors is a pretty big class for us to have. That’s been good, especially with the experience we have coming back,” said Spivey. “It’s a good thing to have that type of versatility with our seniors because you can have them in different positions on the floor. It’s easy to have all four of them out there at the same time with the qualities they have.”

Lewis, who recently signed with the University of the Cumberlands to further her education and basketball career, returns as the second leading scorer for Mercer County at 13 points per game. Lewis has the capability of playing inside and out and is expected to be one of the top players in the 12th Region this season.

Smith and Yeast are known for their ability to play defense and rebound the ball. While Smith can stretch the floor with the three, Yeast primarily works down low and makes her presence known in the paint.

“Those two are going to have to be big for us this season if we want to get to where we want,” said Spivey.

Rhodes transferred in late during her sophomore year, sat out her junior year with a knee injury, and is able to come back for her last year of eligibility. Rhodes can stretch the floor with the three ball and has the skill to handle the ball.

“It’s great to have her back after her injury. She will be one of the top scorers on our team and I’m excited to see what she can do on the floor,” said Spivey. “It’s been tough on her not being able to play coming off a serious injury, but she’s healthy now and ready to go. She’s been waiting a while to get back on the court and play in some meaningful games.”

Stevie Shepherd and Ry’Ann Tharp make up the junior class for the Lady Titans this season.

Shepherd returns as one of the top three-point shooters on the team from last season at 30-percent, averaging 3 points per game her sophomore season.

“She’s (Shepherd) been working pretty hard, working out in the mornings before school, and we just need her to be consistent from beyond the arc which she is capable of doing,” said Spivey. “We’ve got to be able to hit the outside shot and Stevie will be a big part of that.”

Tharp, along with Shepherd, played on the state championship team her eighth grade year and freshman season, returns after not playing last season.

“We’re really excited to have Ry’Ann back. Everybody had been in her ear about playing so she decided to play and she is a great asset to our team,” said Spivey. “She’s athletic and she’s still getting her basketball skill set back, but she has picked it up quick after taking a year off. What she does for us defensively is really going to be beneficial to our team this year.”

Mercer County have a combined seven underclassmen (five freshmen, one sophomore and one eighth grader).

Love Mays returns as the only sophomore. She has been on the varsity team since her eighth grade season and is expected to play a lot of minutes as point guard.

“Love (Mays) got hurt right after her soccer season and we’re just now getting her back,” said Spivey. “She is so athletic and really quick. She very well could be one of the quickest players that I’ve ever coached. She has a good basketball IQ and she can score. She’ll be able to help us out a lot on both ends of the floor.”

Mercer County’s top returning scorer, freshman Timberlynn Yeast, averaged 15 points per game as an eighth grader and is expected to be one of the top players in the region as she enters high school.

“She had a standout season last year and I’ll be honest, not that I didn’t think she was capable of it, but I didn’t think anybody expected her season last year as an eighth grader to be as good as it was,” said Spivey. “The biggest thing this year we talked about with her is that she’s not a secret anymore. This year, opponents will expect her production. She’s really good about being humble.”

“I brought them in to talk to her just because she can potentially be on the same path that they are on,” said Spivey.

“I just thought it was good she can hear some things from them about the process, what it takes to play at that level and I think she really responded well to it,” said Spivey.

Anna Drakeford is another freshman that as been on the varsity team for a few years. Drakeford is capable of handling the ball at the point guard position and has the strength to get to the basket and score in the paint.

“She might be our most improved player this year,” said Spivey. “She’s been really putting in work in the mornings and she just wants to get better everyday. I’m really excited about that this year and for her to play a big part.”

Outside of Yeast and Drakeford, Lindsay Jessie, Jersey McGinnis and Lauren Bordeaux make up the rest of the freshmen class.

“Lindsay does everything you ask of her. She’s a hard worker and I’m really excited about seeing what she can do this year. Physically, she’s gotten stronger and she’s our tallest girl. She’s long, athletic and she runs the floor,” said Spivey. “With Jersey and Lauren, they come in and work hard and I’m excited to see them grow as players. Our underclassmen are the future of our program so to have them up to speed is a plus.”

Sara Dunn is playing up this season from the middle school team and Spivey is excited about what she can bring to the varsity team in practice and in games.

“She has a bright future in basketball. She can really shoot and has a pure shot,” said Spivey. “She’s one that is dedicated and wants to put the extra time and effort in. I’m excited to see her progress throughout high school.”

The Lady Titans will be on the road a lot this season, only playing eight home games compared to 17 games on the road. Most notably, Mercer County will travel to Myrtle Beach in South Carolina to participate in the Crescom Bank Holiday Classic.

“We’re excited first off to be able to go on a trip. This will be the big trip that these group of girls have gotten to take where it’s their team,” said Spivey. “We’re going to see the best of the best. Regardless of the opponent, we’re going down there to compete. I’d rather play teams like that than play teams we know we’re going to beat.”

After Coach Souder left Mercer in the spring of 2018, he came back that the following fall to coach the South Laurel Lady Cardinals in London. The Lady Titans play South Laurel in the 12th/13th Region Challenge at South Laurel this Saturday, Dec. 7. Spivey talked about being able to coach against her former coach and mentor.

“I’m excited about it. Obviously I played for him and coached with him,” she said. “It’ll be a good game for our girls. It’s exciting to coach against the coach who coached me when I played. It’s an honor to get to do that and share a court with him. It might be the toughest second game of the season that we picked to play.”

Danville, Southwestern, Casey County and Lincoln County will be the top competitors for the Lady Titans in the 12th Region.

“I’ve told people over and over that the 12th Region is one of the top regions in the state. Just for region games, we’re going to be playing elite teams,” said Spivey. “Which is good for us. That’s what I want. Especially for this year and the future, we need to be playing those kind of games to prepare us for the region and state tournament.”

Along with Jennifer Merchant, two new assistant coaches are on the Lady Titans staff for this season. They might be new to the high school program, but they are familiar faces. Keith Lewis and Todd Bryant who are coaches at King Middle School, jump up to the high school ranks and have been a big help to the team so far early in the season.

“Both Coach Bryant and Lewis know the girls and have been a big asset to us so far,” said Spivey. “It’s good to have that connection where the girls in middle school know the system and are ready when they get to the high school level.”

Last year didn’t end the way Mercer County wanted, getting ousted in the first round of the region tournament. Spivey talked about what has to happen this year for her team to get Mercer County back to the state tournament.

“That’s our main goal is always to win the 12th Region. The biggest thing in our season is who we are playing to prepare us for the postseason,” she said. “We have to keep a positive mentality and not get down on ourselves. We have the ability to win the 12th Region. We just have to buy-in and work on getting better every single day.”