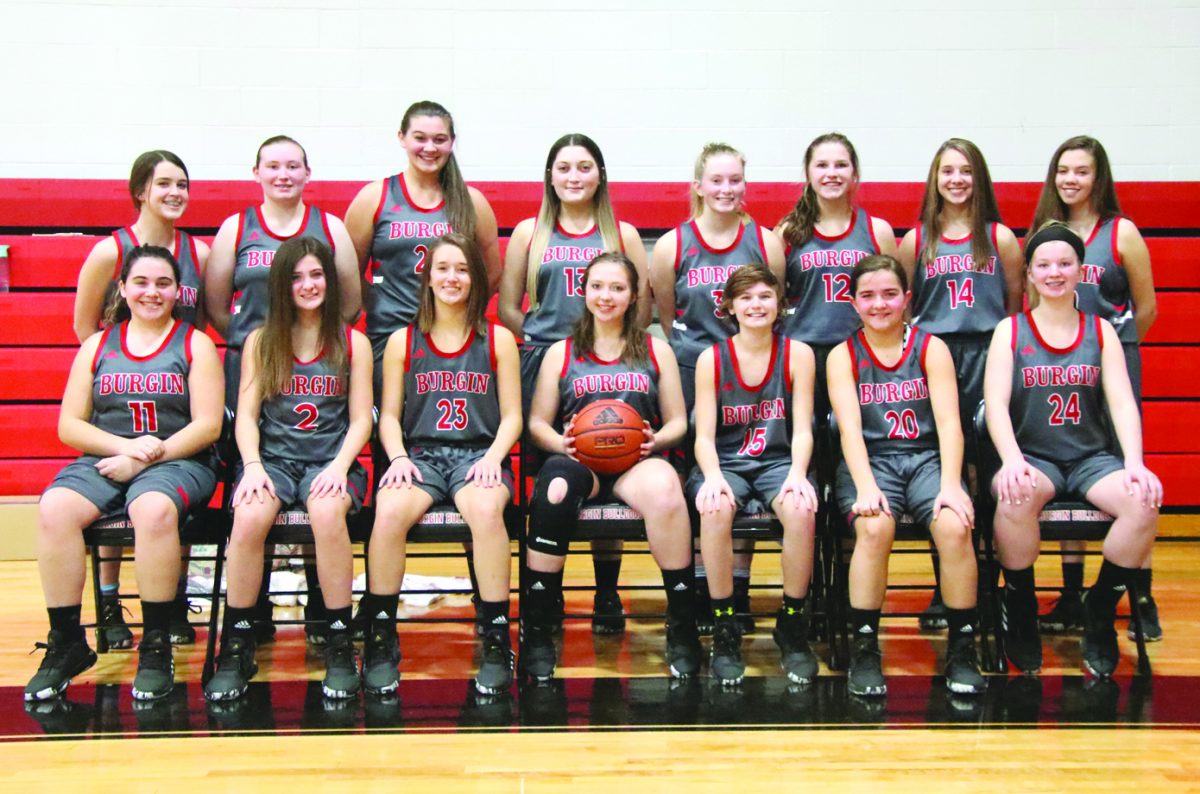 The Burgin Lady Bulldogs struggled last season, going 3-22, but they hope to get back on the winning track in 2019-2020 with everybody returning, led by three experienced upperclassmen.

Head Coach Keith Monson returned to the sidelines last season after a 12-year absence. After previous stints coaching at Burgin, Monson returns for his second year in his most recent stint as Lady Bulldogs head coach.

Burgin’s season ended last year to the Mercer County Lady Titans in the first round of the 46th District Tournament, which was held at Burgin for the first time ever.

Monson talked about his team so far this season, noting that he recently got a full team after the conclusion of the fall sports season.

“We’ve had some good practices now that we have a full team. They are starting to gel a little bit and having two seniors this season will really help us and our younger girls,” said Monson.

“Julia (Arnett) and Madison (Gilkison) are doing a great job so far leading us and keeping our team together,” said Monson. “Madison has really stepped up early so far this season along with Julia in terms of getting everybody ready for practice and how to prepare.”

Arnett has the ability to handle the ball and find open teammates, while being able to hit that 15-foot jumper with consistency. Gilkison, who didn’t get a ton of playing time last season while trying to adapt to a new offense, brings size and the ability to rebound down low.

Burgin’s only junior, Hannah Stewart, returns for her third season of varsity basketball. Stewart was tied for the team lead in scoring last season, averaging five points per game.

“Hannah (Stewart) doesn’t say a whole lot. She leads by example,” said Monson. “She’s been doing a very good job of keeping everybody together and working hard as a team leader.”

Stewart has the ability to shoot the three, leading the team in percentage last season, and is able to bring the ball up the court in the point guard position.

Monson said his younger players really look up to the three upperclassmen and he hopes that continues throughout the rest of the season.

A large amount of underclassmen in most high school programs rarely get much playing time with a roster full of upperclassmen. Despite having youth, Burgin’s underclassmen bring back an experienced group that have played up at the varsity level since they were in eighth grade.

Grace Cocanougher, Ellie Jenkins and Brynn Simpson are the three Lady Bulldogs sophomores in 2019-2010. Jenkins, Cocanougher and Simpson have played meaningful varsity minutes the last two seasons and expect to see a lot of court time this season as well.

“These girls are still very young but bring back a lot of experience. We have a strong sophomore class,” said Monson.

Jenkins was described by Monson, and also her previous coach, Chad Terrell, as being the heart of the team.

She is expected to guard the other team’s best player and bring energy and hustle to the team.

“She does a lot for us that doesn’t show up on the stat sheet and that’s big for us,” said Monson.

Cocanougher and Simpson both averaged just under three points per game last season, but expect that number to go up. They’ve both seen plenty of competition and know what to expect.

One big addition to the Burgin basketball program this season has been the new weight room on campus.

“We’ve gotten a lot stronger. The girls have been working really hard,” said Monson. “The weight room is tremendous and we’ve taken advantage of it. When  we first started, I didn’t know how they would take it. But they got in there and they work hard. They’ve really gotten after it.”

Kaiden Lewis, Jaylin Tudor and Baleigh Turner make up the freshmen class for Burgin. All three played an ample amount of varsity minutes last season and are expected to be key contributors this season. Lewis returns as the top scorer, averaging five points per game, tied with Stewart.

“All of our younger girls have learned from the upperclassmen how to prepare and have strong practices that can lead into games,” said Monson. “I’ve been very pleased with all of our players so far and their effort.”

Burgin has three eighth graders and four seventh graders on their roster.

Edwards is not expected to start the season after recovering from a knee injury. As a seventh grader, Edwards brought hustle and energy to the team that was needed.

“It’s a big loss not having her but we hope to get her back soon,” said Monson.

“All four of them have potential and I’m excited about seeing them grow as players,” said Monson.

Despite going 3-22 last season, the Lady Bulldogs fought till the final buzzer, something Monson was very proud of last season.

“I thought we improved. That’s how to judge success outside of wins and losses,” said Monson. “If you listen, learn and improve everyday, the game will be easier.”

With an experienced roster, Monson hopes this season will bring more wins to the Lady Bulldog program.

“Even though they’re young, they’ve already walked the walk a time or two so they know what to expect,” said Monson.

Burgin plays in two tournaments this season. They host the Burgin Invitational and the 12th Region All “A” Classic.

Despite the invitational being moved to a round robin due to a team dropping out, Monson talked about the excitement around hosting a tournament around Christmas.

“It’s the first Christmas tournament that we’ve hosted since I can remember. I think it’s a neat thing to get tournament experience in the middle of the season,” said Monson. “Even though it is smaller schools like us, it’s still competition.”

One game on the schedule has provided a lot of excitement for Burgin. In early February, Burgin will travel to Richmond to take on Model at EKU’s Alumni Coliseum.

“They’re really pumped up about that opportunity. I am too,” said Monson. “It’ll be a great experience for our team.”

Monson talked about his expectations of this year’s group.

“Of course you want to win, but I want to see improvement everyday in practice carrying over to games,” he said.

Burgin struggled last season with costly turnovers that hurt them late in games.

“Even though you get beat, you can still get beat and play better,” said Monson. “A lot of times, we just threw the ball away. I want us to take care of the ball better and go from there.”

Taylor Cooley returns as assistant coach and Monson said she has been a big influence on the girls since she joined the bench.

“She’s been great and it helps me out a lot,” said Monson.

The Lady Bulldogs play their first home game of the season on Thursday, Dec. 5, when they host Kentucky School for the Deaf at 7:30 p.m.

Feb. 10 Kentucky School for the Deaf Away