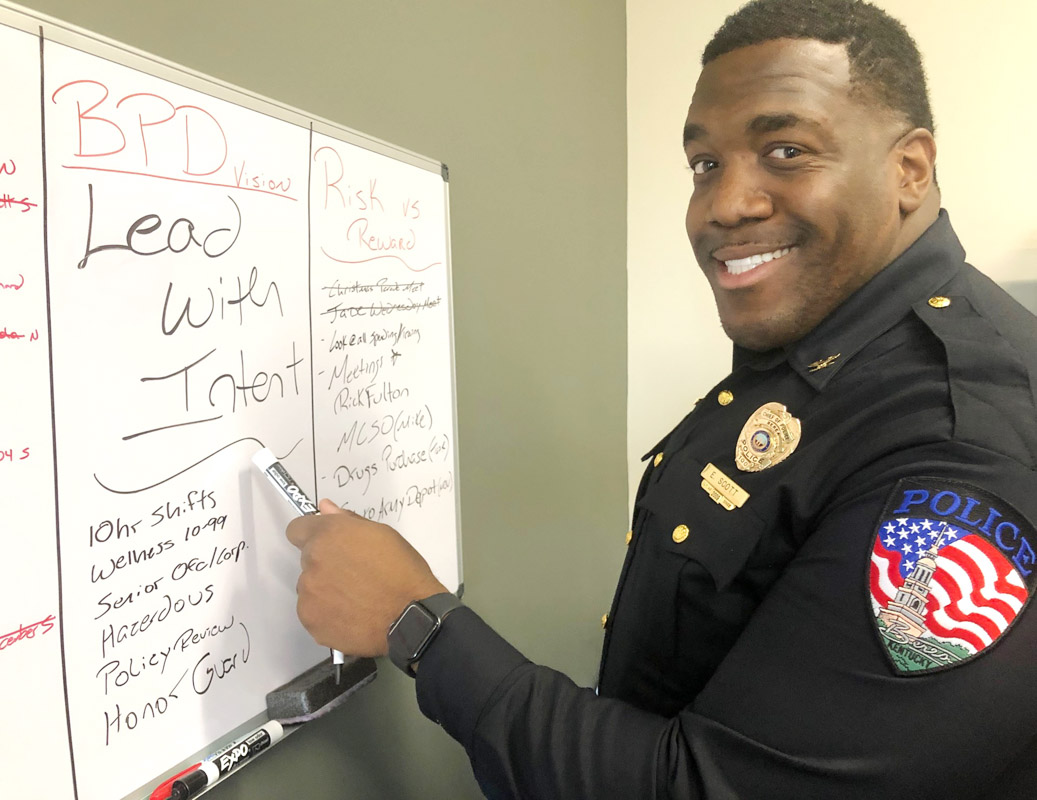 Former UK football player Eric Scott is excited about the opportunity he has as police chief in Berea. (Keith Taylor Photo)

Eric Scott came to the University of Kentucky from Georgia to play tight end, catch touchdown passes and prepare for a career in the National Football League. He knew he liked UK and the football program, but he never thought of Kentucky being a life-time destination for him.

Yet that is what happened. Scott had a successful UK career from 2003-2007 even if he did have to move from tight end to center. He played in the NFL but only for two years due to injuries. He came back to UK to complete his master’s degree and went to a career fair where he ran into Kevin Franklin, a captain on the UK police force who had accompanied the UK football team on road trips when Scott was a player. Scott knew he would eventually be miserable with a job working full-time in an office. Franklin told him the UK police force had openings and he would be able to pay for his education as a UK employee.

“I had no intentions of getting into police work,” said Scott. “I was supposed to be playing 20 years in the NFL. But after injuries and surgeries, I ended up back at UK and just by coincidence ran into the UK police office who traveled with the team. He helped sign me up and I fell in love with police work.”

Within a year,  the 6-4, 280-pound Scott was the UK police officer traveling with the UK football team to provide security for coach Rich Brooks and later coaches Joker Phillips and Mark Stoops. He also went on basketball trips with coach John Calipari from 2009 to 2016.

“I saw an operational side of things I had never seen as a player,’ Scott said. “I learned there was a huge operation to every game.”

Now Scott is running his own operation. He recently became police chief in Berea

“The mayor and former police chief have been great to me,” Scott said. “When I first came to Lexington, I thought it was small. Then I realized it was one of the bigger cities in Kentucky. Berea is small but is a very passionate town. It’s smaller than Lexington obviously but is not a slow town. People are super passionate about what we do. Lexington has a huge university and ever changing population. Here I see the same people every day and that makes it easier to earn their trust because they know us and we know who they are.”

Scott, who has three daughters ranging in age from 8 to 17, hopes former teammates will stop by Berea to see him. He also would not mind adding ex-UK athletes to the Berea police department.

“Athletes are some of the best employees you could ever have,” Scott said.

Scott certainly was the good “employee” on the UK football team when Brooks and Phillips, then the UK offensive coordinator, suggested he move from tight end to center. He said the coaches told him with the tight ends on the roster, including future all-SEC and nine year NFL veteran Jacob Tamme, it would be easier for Scott to bulk up to 290 pounds to play center rather than drop to 230 to get more speed to stay at tight end.

The coaches put him in touch with Dermontti Dawson, who made the switch from fullback to center at UK and became an All-Pro center and Hall of Famer with the Pittsburgh Steelers.

“My senior year I transitioned to center and that’s the reason I got the opportunity to play in the NFL,” Scott said. “Now I fought the move. Don’t get me wrong. Rich Brooks is a man I admire and trust more than anything. He’s been a lifelong mentor but I knew there was no way to show off for my girlfriend playing center.”

Kentucky teammate Wesley Woodyard helped convince Scott to make the move and once he did, he had no regrets.

“Becoming a lineman changed me. It taught me how to become selfless and sacrifice for others,” the Berea police chief said. “I never expected anything in return. I didn’t jump up and down over making the move but it was great for me.”

Scott insists he still “bleeds blue” even though he doesn’t always get to watch UK play now because of his daughters’ athletics schedules. However, he’s seen enough this year to be proud of what Kentucky has done after having starting quarterback Terry Wilson go down with a season-ending knee injury in game two.

“Everyone should realize how important the quarterback is. Football is a 365-day sport. Losing your quarterback that early is like getting to page 80 of a report and accidentally deleting it and having to start over to get that report done in a hurry now,” Scott said. “That’s what happens when you lose your quarterback.

“Kentucky is a team that has grown talent-wise more than I could ever have imagined when I was there. Then we had a bunch of two-and three-star guys trying to win seven or eight games. These guys can make mistakes and still win seven. It shows the great work the coaches have done and I am so happy with all I have seen. I am excited to see where this program continues to go.

“I will forever be indebted to UK athletics for taking an 18-year-old kid from Atlanta and turning him into a man. The coaches and (athletics director) Mitch Barnhart helped me grow and get to where I am today.” 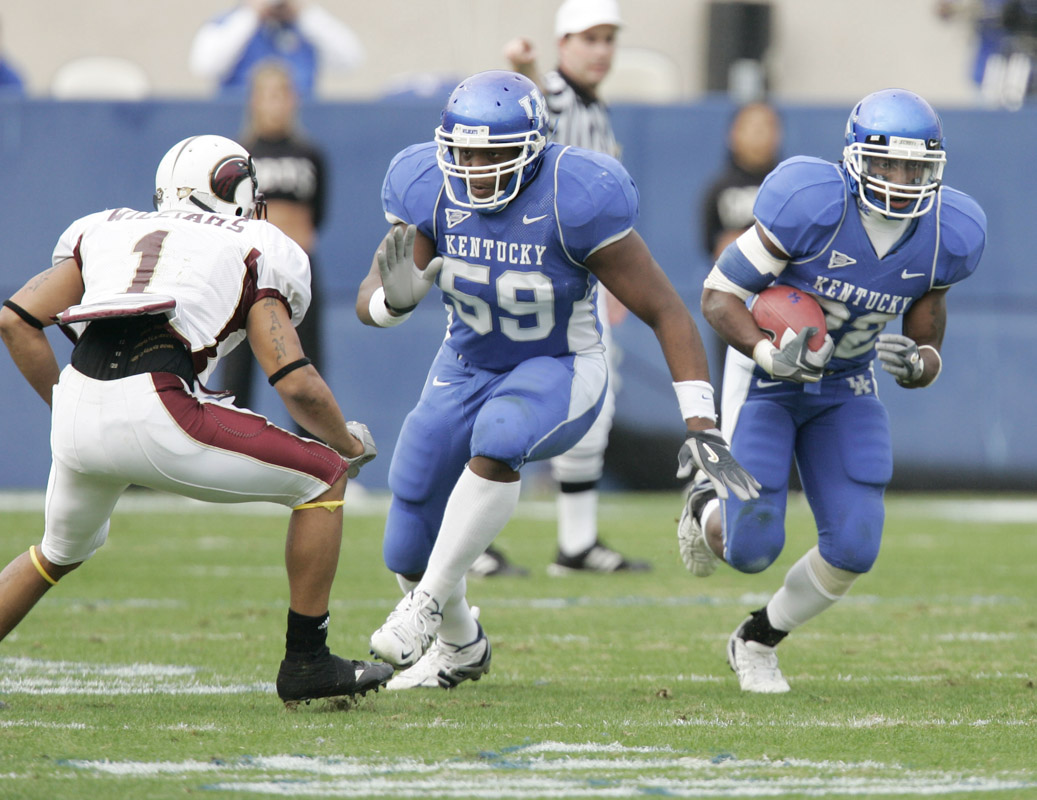 Eric Scott (59) says he will forever be indebted to UK athletics for the opportunities it gave him. (UK Athletics Photo)

It’s never easy for star high school basketball players to make the transition to big-time college basketball. However, UK freshman Kahlil Whitney is one of the few players I can remember admitting that he never “gave any real thought” to playing defense in high school.

That is a bit of a surprise with Whitney’s length and athleticism — and many also expected him to be a potential lockdown defender at UK this season.

Kentucky coach John Calipari was not surprised by Whitney’s admission because he knows many players have the same thought process in high school.

“How about this? How about not being delusional? Like self-evaluating at his age. Wow!” Calipari said about Whitney. “They (other players) don’t. And the people around them are telling them they’re the best, and you’re this, and its everybody else, and enabling.

“It’s not happening there. When I talked to him about what  I’m  looking for and he and I have a conversation, I walk out of the room and I go, ‘Wow, really smart kid. Really smart.’”

Now if Calipari can just get him to play defense the way he wants because defense could be UK’s calling card this season.

ESPN analyst Seth Greenberg, a former Division I coach, says UK has “no offensive identity” yet.

“They will be fine. Everybody just needs to take a deep breath,” Greenberg said. “For me, it’s a question of how are they going to score. 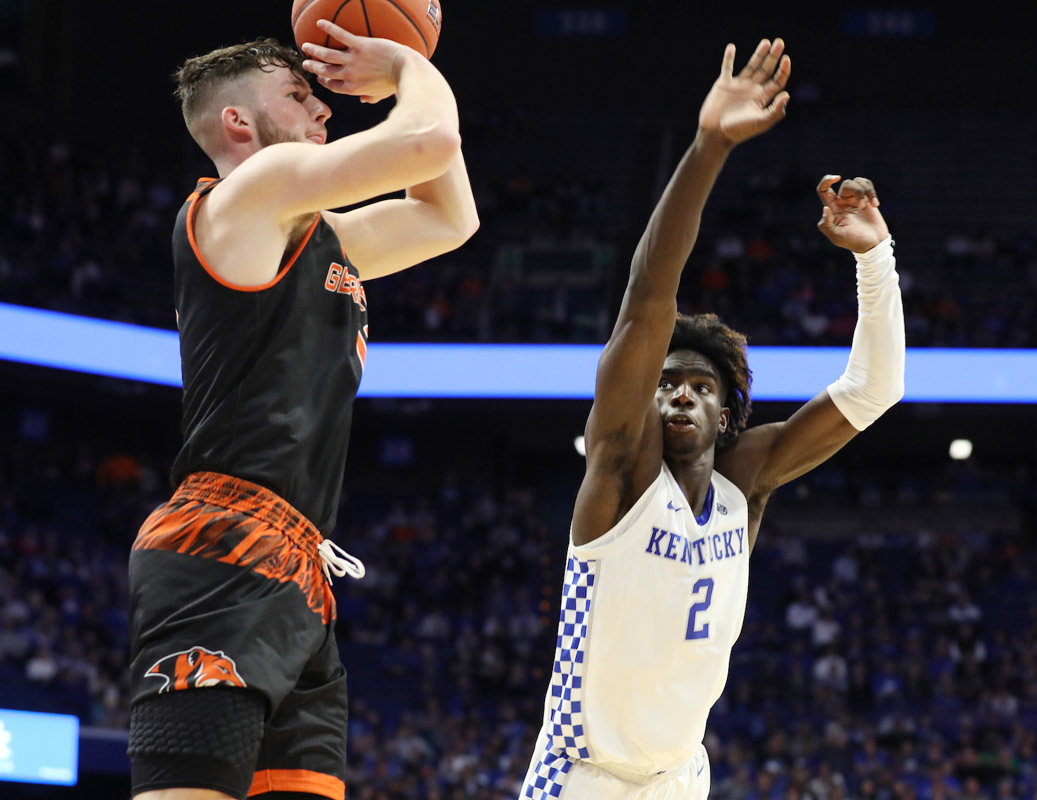 Freshman Kahlil Whitney for the first time is having to make a defense a priority. (Vicky Graff Photo)

Adding 6-9 Isaiah Jackson to Kentucky’s 2020 was a “great fit” for the Wildcats according to Rivals.com recruiting writer Krysten Peek.

“He gets better and better and definitely has not reached his ceiling yet,” Peek said. “He is very raw in terms of talent but he does things in transition that will really surprise you.

“He has a quite demeanor but on the court he is kind of like Kahlil Whitney. I think he’s a great fit for Kentucky with the class it has coming in. He could be great playing with Terrence Clarke and BJ Boston.”

Point guard Devin Asked, another UK signee who reclassified from the 2021 class to the 2020 class, is another “great fit” in Peek’s opinion.

“Last summer he told his dad he wanted to be a pro and wanted to see which coach would push me and it turned out to be Cal and Kenny Payne. He said no one would push him harder than Cal.”

Peek says he has a unique talent level.

“He is a true point guard,” Peek said. “His crossover is so crazy and fast. He likes to dish the ball, but is not a guy that has to take shots to be happy or impact a game. He will be great with BJ and Terrence.” 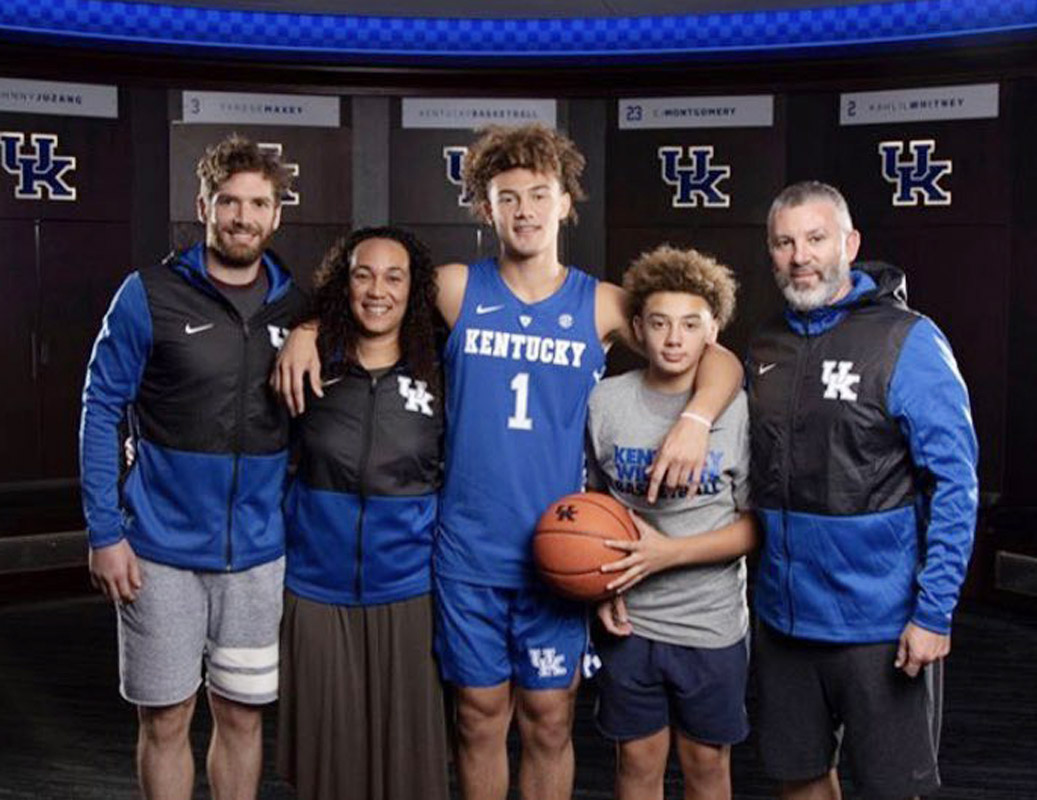 Rivals.com recruiting writer Krysten Peeks believes signee Devin Askew will be a “great fit” at point guard for John Calipari and others in the 2020 signing class. (USA Basketball Photo)

Having former players coming to support the current Cats is something that coach Mark Stoops really likes.

Former UK All-American linebacker Josh Allen came back to Lexington for a game on his NFL bye week. When Kentucky played Vanderbilt in Nashville, current Tennessee Titan and former all-SEC linebacker Wesley Woodyard gave the Cats a “pep talk” after their Friday practice.

“I think it meant a lot to our team. I think he had little something to do with that (win over Vanderbilt), and I give him a big thanks.”

But he’s not the only former player to support the Cats. Former All-SEC tight end Jacob Tamme, a nine-year NFL veteran, has talked to the team this year and was game captain last week when the Cats played Tennessee-Martin.

“We’re all in this together. That’s how I feel. I don’t think you need to be a coach Brooks guy or a coach Stoops guy or an anybody,” Stoops said.

“You’re a Kentucky Wildcat. That’s how I feel with all the ex-players. I embrace all of them and want them all to be a part of this. We appreciate them all coming back and seeing us.”

Kentucky fans will be able to see signee Brandon “BJ” Boston play often on TV this season for Sierra Canyon.

The team will have 13 appearances on ESPN3 during the season thanks to having such a star-laden roster that not only includes Boston, the ninth rated player in the 2020 recruiting class by ESPN, but also No. 5 Zaire Williams and No. 78 Terren Frank.

Quote of the Week:  “I always tease Cal, but I am not feeling sorry for him. He has a lot of good players. He and I joke and go back and forth, but believe me, he is going to be just fine. We all know that. He has a good basketball team and a lot of good players,” Kentucky football coach Mark Stoops when asked how he would feel about quarterback Lynn Bowden joining the basketball team in January.

Quote of the Week 2: “Too early to make an assumption. But is seems as if this Kentucky team has a far better chance of being one of Calipari’s worst teams than one of his best. Now, that’s all relative in Lexington. The ‘worst’ can still be a good team,” ESPN analyst Myron Medcalf on UK’s early-season basketball struggles.

Quote of the Week 3: “They have to figure out how to use him. He is not a low post player. He needs to be used to space the court. But it will come,” ESPN analyst Seth Greenberg on UK senior Nate Sestina.