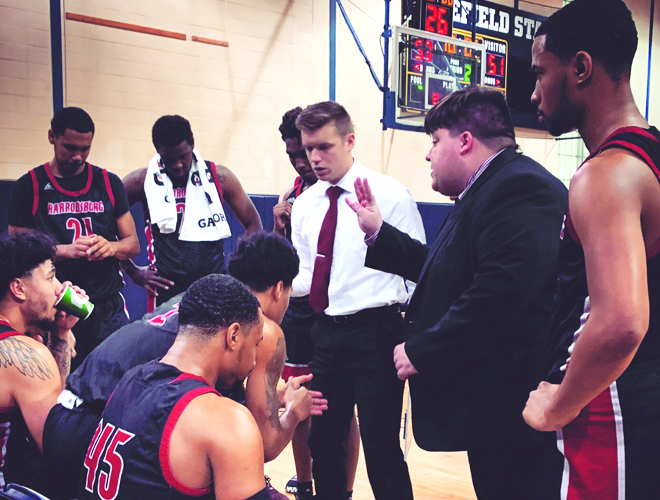 For the first time this season, the CU-Harrodsburg Pioneers took the floor in two weekend matchups against Bryant and Stratton – Rochester and NCAA Division II Bluefield State.

Sophomore Tyrese Duncan would prove to be the difference maker against Bryant and Stratton, with his lone field goal of the afternoon coming in the form of a three pointer to put the game away.

Duncan is now 2-for-3 in career potential game winning three point field goals at CU-Harrodsburg. The Pioneers picked up the 76-73 win.

In a rematch of last year’s opening matchup, Division II Bluefield State hosted the Pioneers Sunday afternoon. Sophomores Shadarno Clarke and Anthony Ward carried the Pioneers in the first half dominating the post. In the second half, the Pioneers were led by sophomore Antoine Darby with 18 points, but Bluefield State was able to hold on for a 80-76 win for the Blues.

“We are never content with moral victories, but to lose to this same team by 20+ points last season, and be a couple of turnovers away from getting the win shows where we’ve grown,” said Dalton Christopher, Athletic Director. “We still have work to do, but this is a special group with a great core of leadership.”

The win over Bryant and Stratton would be a special one for head coach Austin Sparrow, as it was his first head coaching victory.

“Today we took a huge step in creating a new chapter for Campbellsville – University Harrodsburg Basketball as Pioneers,” said Sparrow. “I couldn’t ask for a better way to begin our programs season and what’s hopefully a long career.”