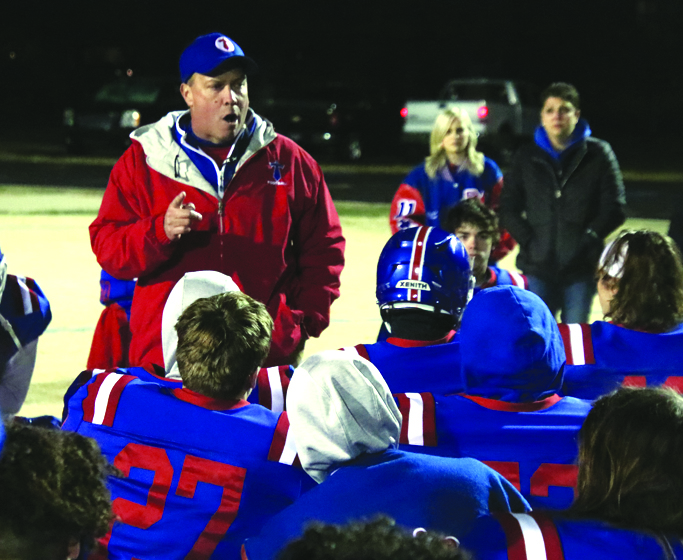 Mercer County football Head Coach David Buchanan talks to his team after falling to CAL in the first round of the Class AAA playoffs on Friday, Nov. 8, at Alvis Johnson Field. (photo by Arpan Dixit)

The first matchup between the Mercer County Titans (8-3) and the Christian Academy of Louisville Centurions (7-4) lived up to the hype, with both teams scoring 87 points between them, and the Titans coming up with a big road win in late September.

The rematch, with higher stakes in the first round of the Class AAA playoffs, didn’t live up to the first meeting.

The Centurions took control from the start and were able to advance after a 34-14 victory on Friday, Nov. 8, at Alvis Johnson Field. CAL will take on DeSales this Friday, Nov. 15, on the road in the second round.

CAL quarterback Anthony Sabatino torched the Titans through the air, going 17-for-23 for 298 yards and three touchdowns. On the receiving end of Sabatino’s passes, Gage Geren was the top receiver for the Centurions, hauling in five catches for 135 yards and one touchdown.

Despite the loss, Buchanan was proud of the way his team competed this season and said his program has come a long way since he started here back in 2015.

“We’ve played some awful good football. I think our seniors have brought our program an awful long way and we’d like to have gone further, but our guys brought us a million miles,” he said. “It was a huge accomplishment for us to get a home playoff game in this district. And our kids did it. It gives us a lot to build on and I’ll forever be grateful to this football team.”

Dubbed the “Group of Death”, the Titans battled it out in one of the toughest districts in the state with CAL, DeSales, Western Hills and Henry County. Mercer County moved districts this past season after the realignment.

The running game has been Mercer County’s bread and butter all season, but they were held to only 136 yards on the ground, well below their average of 227 yards on the ground throughout the season coming into the game. It was the first time the Titans failed to win a playoff game in five years. Despite eclipsing the 100-yard rushing mark, the Titans had less than three plays on the ground that went for more than 10 yards. In their previous meeting, Mercer County  rushed for 10 yards or more 13 times.

“They were much sounder stopping the run. Much sounder,” said Buchanan. “You have to give CAL credit, you know, they did a nice job.”

One of CAL’s strongest players on the defensive line, Braeden Babin, missed the last matchup with the Titans due to injury. Buchanan said he was a big difference maker last Friday.

“Getting him back really made a big difference. He’s a really good player. He makes their whole defense better, he really does,” he said.

Buchanan wasn’t lying. Babin had a team-high seven tackles and one sack.

CAL received the opening kick-off and scored on their first drive off a 4-yard run from Brandt Babin. The extra point was missed, but CAL held a 6-0 lead early.

The Titans were able to answer using a little trickery. After senior Kaelin Drakeford took the snap, he handed it off to senior Malachi Yulee, who pitched it to senior Dillon Warren and Warren did the rest, going 39 yards for the score. The extra point by junior Noah Davis gave the Titans a 7-6 lead midway through the first quarter. Warren was the second leading rusher for the Titans with 36 yards on two carries.

On the second play of CAL’s next drive, Sabatino found Geren for a 60-yard score to give the Centurions a 13-7 lead. After forcing a punt on Mercer County’s next drive, Harrison Zimmerer ended the next drive with a 15-yard touchdown catch from Sabatino and CAL found themselves up by two possessions, 20-7, with 10 minutes to play in the second quarter.

The Titans went for it on fourth down on the next drive, but CAL was able to get the stop and capitalize off the turnover. Sabatino threw his third touchdown of the night to Luke Leeper on a 32-yard pass down the middle of the field.

The Titans needed an answer and they got one. Drakeford found a hole on a quarterback keeper and sprinted 56 yards to the end zone for the score. The signal caller was the leading rusher for the Titans with 96 yards on 11 carries. Drakeford also intercepted Sabatino in the second half for the only takeaway for Mercer County and was third on the team with 10 tackles. Senior Bryson Yeast led the Titans with 16 tackles, which puts him at 133 tackles on the season, a team-high.

CAL would answer following Drakeford’s long run. Brandt Babin scored on a 5-yard rush with just 25 seconds remaining in the half to give the Centurions a 34-14 lead at halftime, which would be the final score of the game.

Buchanan said he will always remember this team for taking the program to the next level.

Buchanan praised his senior class after the game and said they have been a big influence on the younger group of Titans.

“They were very resilient. Things would go bad for us and they never gave up and never quit,” he said. “I think that resiliency is something our younger guys got from it.”

Mercer County ends the season with a record of 8-3 while averaging nearly 32 points per game. The rushing attack was a major strength this season, averaging 227 yards per game on the ground. On defense, the Titans forced 10 fumbles and had 16 interceptions, led by Drakeford with four. 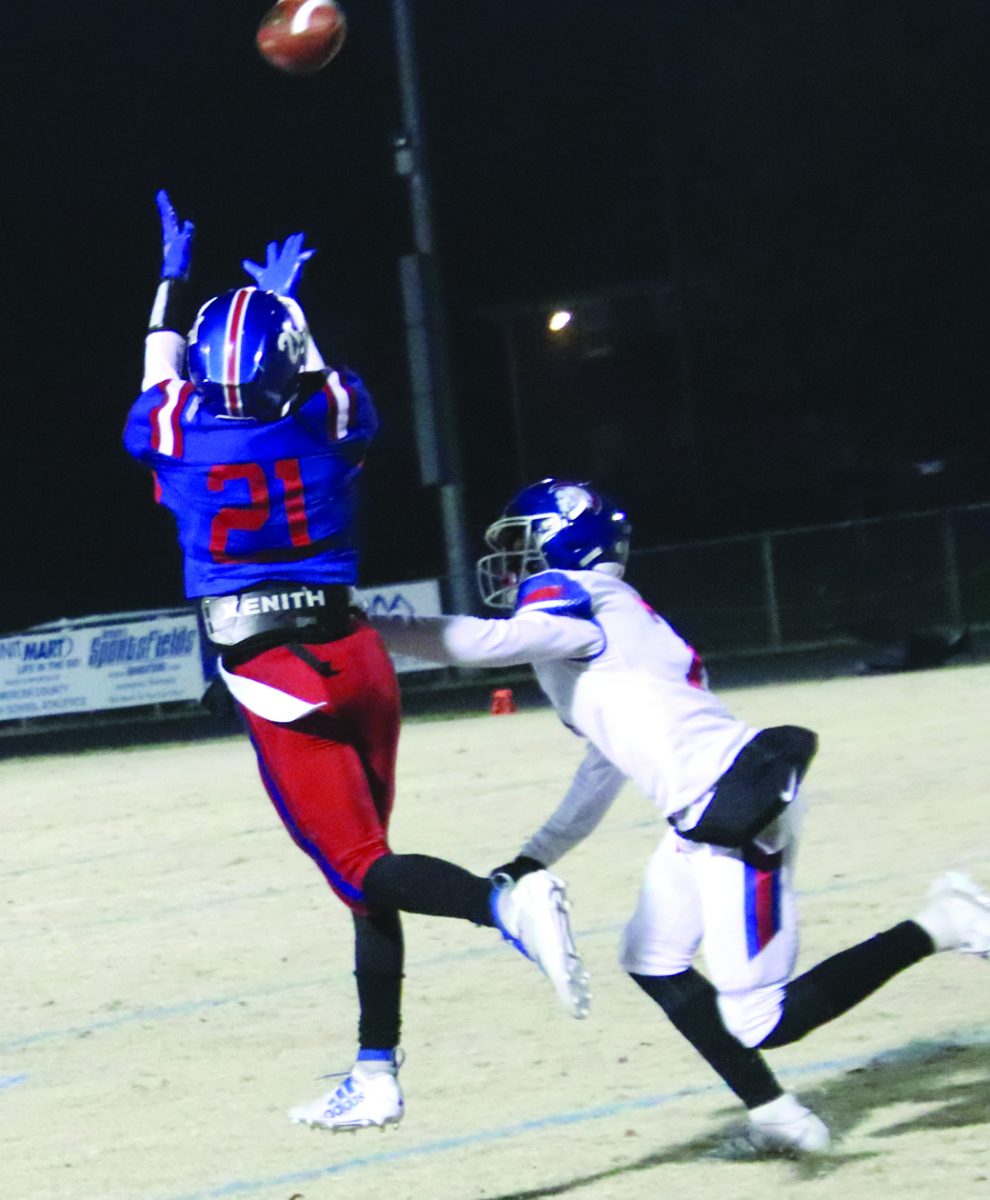 Senior Dillon Warren (21) leaps and hauls in a catch late in the fourth quarter against the Christian Academy of Louisville, in the first round of the Class AAA playoffs, on Friday, Nov. 8, at Alvis Johnson Field. The Centurions defeated the Titans 34-14. 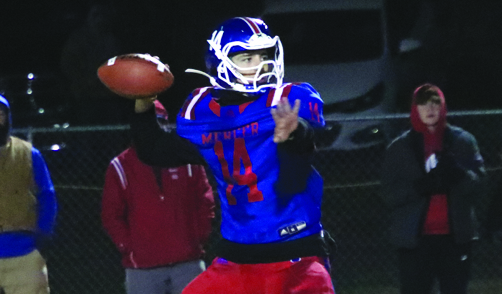 Senior Kaelin Drakeford drops back to pass in the first round of the Class AAA playoffs against CAL on Friday, Nov. 8. 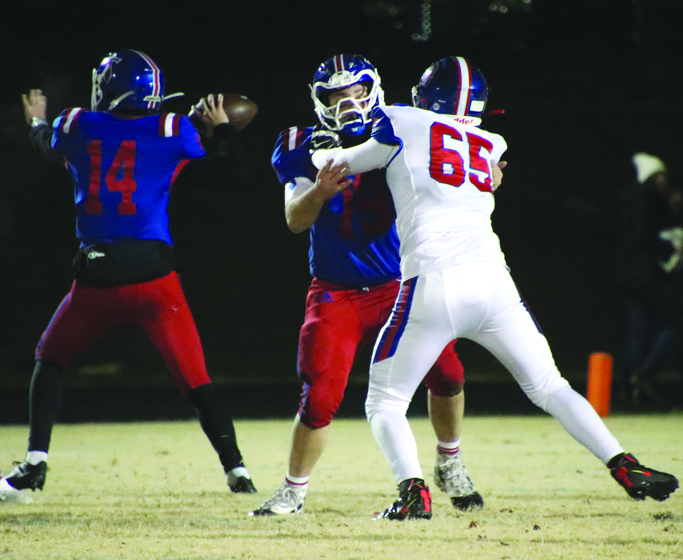 Senior Noah Sewell (middle) blocks for quarterback Kaelin Drakeford (left) against CAL in the first round of the Class AAA playoffs on Friday, Nov. 8. 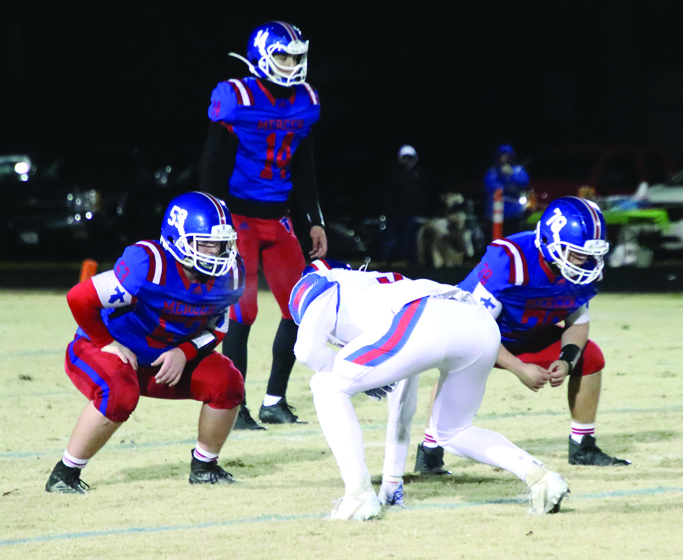 Sophomore Dakota Browning (53) and junior Blake Brown (78) get set to block for Drakeford (14) after the snap against CAL on Friday, Nov. 8. 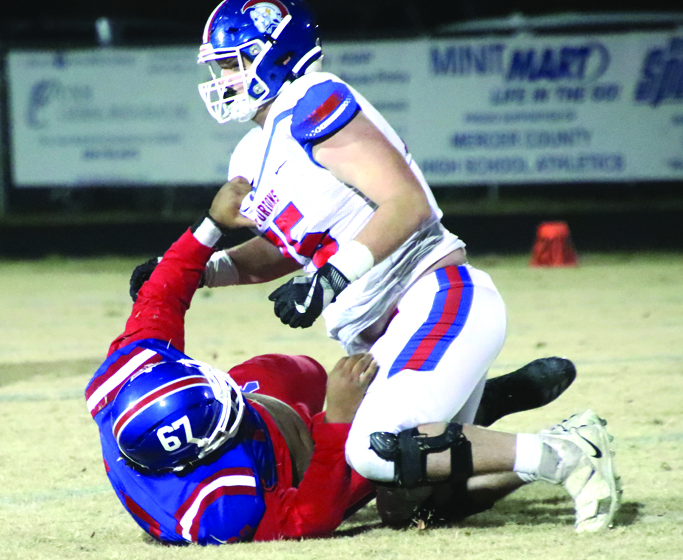 Sophomore Brent McKitric (67) battles with CAL lineman John Young in the playoff matchup between the Titans and the Centurions on Friday, Nov 8.