Titans end their season with a record 18-8 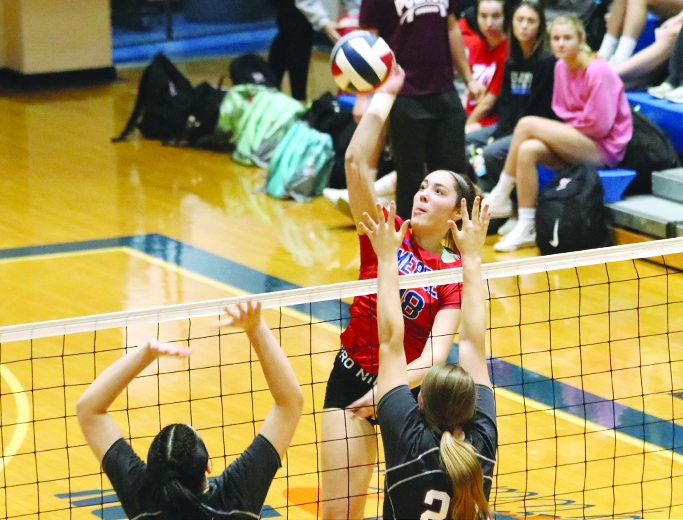 Mercer County senior Jaclyn Devine connects on one of her team-high nine kills against Pulaski County in the 12th Region semifinals on Wednesday, Oct. 30, at Southwestern High School. (photo by Arpan Dixit)

It wasn’t the ending they wanted, but the Mercer County Titans volleyball team had their best season since 2014, winning 18 games, 16 of them coming in region play.

This was the first time the Titans made it to the region semifinals since 2008.

Pulaski County was looking for revenge, after suffering a thrilling five-set loss to the Titans in early October.

The Titans came out and played a much better second set. A kill by Piazza gave the Titans the lead early, 6-5, and a kill by senior Hanna Blevins tied the set at eight after the Maroons went on a mini run. Mercer County had a 22-21 lead after an error into the net by the Maroons. They called timeout shortly after, and the meeting in the huddle seemed to work. Pulaski rattled off four straight points to claim the second set, 25-22.

The third set looked really good for Mercer County at the beginning, winning the first five points, forcing the Maroons to call an early timeout.

A kill by senior Jaclyn Devine gave the Titans a 12-7 lead in the middle of the set. Mercer County had the momentum and were able to force a timeout after claiming four straight points to make it 24-16. The unthinkable happened shortly after. Pulaski County clawed their way back to cut the lead to three, 24-21. The Maroons were able to tie it at 24, before the Titans were able to get a point to make it 25-24. Unfortunately for Mercer County, the Maroons ended the set like they had the previous two, on a run, scoring the final three points to win the set and earn a berth in the region championship game.

It was a tough way to end a magical season for the Titans, but Head Coach Lynn Flach was proud of the way her team competed this season.

“I gave all of them a hug and told them I know that wasn’t the outcome we wanted, but that I was very proud of them. We had a great season overall. I told them not to let this last game define our season,” said Flach. “I was very proud to be their coach. They did a great job all season long. They set the bar high for the younger kids that are following them.”

“I just sit and think about how far our seniors have come in the four years I’ve been coaching them. When they first came in their freshmen year, they were just little girls who would get on your nerves,” Flach said with a smile. “Now, they just have gelled and stuck with it all four years. They’ve improved every single year. Once a kid gets into high school to about their sophomore year, they kind of peak and you know what they’re going to do. But this group of seniors got better every single year. Last year, we were junior strong and we took a lot of beatings. I just think the experiences they had from last year, they took and learned from. They went in this year with a completely different mind set and they learned how to win. It’s been so much fun.”

Devine was named to the 12th Region regular season second team after the conclusion of the game. She led the Titans this year in kills with 343, second in digs with 219 and had the most aces with 55.

“It was so fun to see her growth from 2016 to now. She can be in the middle of doing something, I can yell at her, and she can change it and fix it and do whatever I ask her to do,” said Flach. “She went from all power to control and consistency in her four years here. I didn’t want it to all be about power. As the years went on, she learned to mix power with control and strategy. As the years have gone on, that’s what she’s been able to do. She’s a phenomenal player and so much fun to coach. I love her like my own child.” 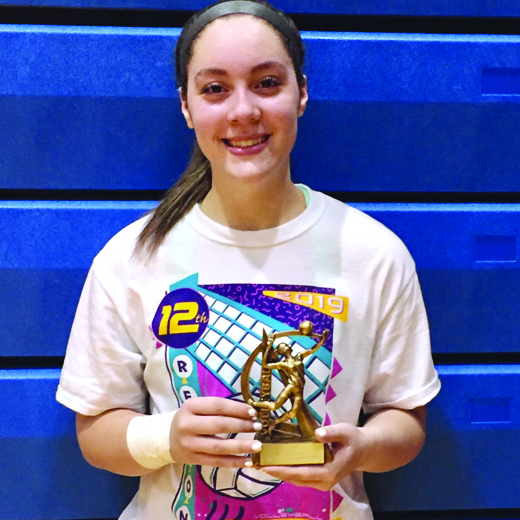 Devine was named to the regular season All 12th Region Second Team after the region tournament last week. (photo by Lynn Flach)