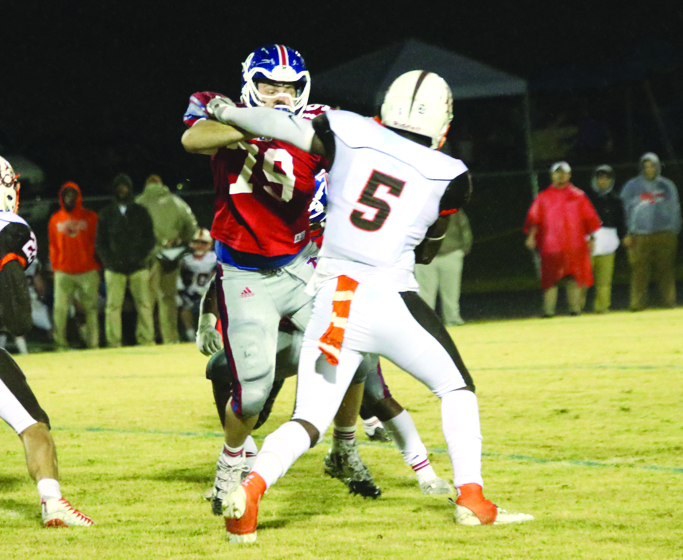 Mercer County senior Noah Sewell makes a block on the left side on offense against DeSales on Friday, Oct. 25, in the District 4 title game at Alvis Johnson Field. (photo by Arpan Dixit)

Both the Mercer County Titans (7-2) and the DeSales Colts (7-2) were considered the top two teams in Class AAA heading into their matchup for the District 4 title on Friday, Oct. 25, at Alvis Johnson Field.

The Colts were able to win the battle for the district  by a final score of 39-23.

“I think they’re (DeSales) a really good team and I think they outplayed us in the second half, which was the difference in the game,” said Head Coach David Buchanan. “They did a really good job and they’ve just got a nice ball club. We’ve got two weeks to get ready for the playoffs and we have to get a whole lot better.”

The score indicates the Colts winning by three possessions, but the game was much closer.

On a rainy and muddy senior night, both teams battled it out in a physical game from start to finish.

James Johnson for DeSales had the stat line of the night. He rushed 28 times for 237 yards and three scores. Johnson accounted for 237 of 289 total rushing yards for DeSales.

The game got off to a great start for Mercer County, forcing a punt, which the Colts mishandled, giving the Titans the ball at the DeSales 44-yard line.

Yulee picked up 13 yards on his first carry and picked up a first down on a pass from senior quarterback Kaelin Drakeford on fourth down, getting tackled inside the 10-yard line. Yulee ran it in from one yard out for the first score of the game and his 13th rushing touchdown of the season, a team-high.

DeSales answered with a two yard rushing touchdown from James Johnson. The extra point was missed, making the score 7-6 in favor of Mercer County with one minute left in the first quarter.

Yulee made his presence known on the next drive, rushing for a 21-yard score to give the Titans a 14-6 lead early in the second quarter. The drive was set up by completed passes from Drakeford to sophomore Brayden Dunn and senior Dillon Warren.

On the next drive for DeSales, they chose to go for it on fourth and one at their own 41-yard line, but a false start forced a punt. Special teams woes continued for the Colts as sophomore Jalen Lukistch snuck into the back field and blocked the punt, giving the Titans solid field position at the DeSales 42-yard line.

On fourth and eight, the Titans elected to go for it despite receiving a false start, but weren’t able to convert as Drakeford was sacked for a turnover on downs.

On the first play after the turnover, Johnson broke free for a 54-yard scamper for the score. The Colts were stopped on the two-point conversion and the score stood at 14-12 Mercer County with 3:42 left in the first half.

After two rushes for no gain by Yulee, the Titans weren’t able to convert on third down and were forced to punt.

DeSales took over at their own 35-yard line with just under two minutes remaining and were looking for  momentum shifting score before the half. Warren had other plans. He was able to intercept DeSales quarterback Jayden Scroggins down inside the red zone and returned it all the way to the DeSales 40-yard line with just over one minute remaining.

After a quarterback keeper by Drakeford, who ran out of bounds to stop the clock, junior kicker Noah Davis converted on a 33-yard field goal to give the Titans a 17-13 lead heading into halftime.

Mercer County went into the locker room with momentum, converting on the field goal, blocking two punts and getting what they wanted on the ground.

The Titans received the second half kickoff, but were forced to punt after no gains on three straight plays.

The next drive for DeSales ended on a two-yard quarterback keeper from the goal line by Scroggins. The Colts converted on a two-point conversion by Johnson to take a 20-17 lead with four minutes remaining in the third quarter.

After Drakeford was sacked on third down on the next possession, the Titans were faced with a fourth and 12. Davis came out to punt, but before he was gathering to kick, he read the defense and called his own fake for a first down on a 14 yard run down the Colts sideline. The Titans weren’t able to make anything of it, punting four plays later. Lukitsch made another big play, recovering a fumble on the next Colts possession to set the Titans up inside DeSales territory at the 25-yard line. Mercer County was able to capitalize on the turnover, scoring a touchdown on a 16-yard pass from Drakeford to Warren on fourth and long. Davis’ extra point was blocked, which left the score 23-20 with just under 10 minutes to play.

Drakeford made a big play on defense, intercepting Scroggins on the next DeSales drive, but the takeaway was negated by a defensive holding penalty. That penalty proved to be costly, as the Colts took the lead on a three yard rushing score by Johnson, his third of the game. The Titans trailed 27-23 with five minutes to play.

Mercer County wasn’t able to make anything of their next possession, with Drakeford getting sacked on third down.

The next drive for the Colts ended on another quarterback sneak from the goal line by Scroggins, his second rushing score of the game. The Colts had their biggest lead, 33-23, with just a minute and a half remaining.

The Titans were forced to throw with just under a minute remaining. Drakeford’s pass was intercepted by DeMarcus Avery, who took the ball 46 yards to the house for a pick six, to seal the victory and the District 4 title for DeSales. DeSales did not attempt an extra point and the game ended at 39-23.

Drakeford had one of his best passing games of the season, going 11-for-23 for 129 yards, one touchdown and one interception.

“I thought he did a good job tonight. I was proud of him,” said Buchanan.

Warren was the top receiver for Mercer County, catching six passes for 69 yards and one score.

Senior Bryson Yeast, who is the leading tackler for Mercer County this season, had a game-high 21 tackles. Yeast has 102 tackles in 2019, with seven of them coming for loss. He also has one forced fumble and fumble recovery.

The Titans will be back on the gridiron for their regular season finale on the road against West Jessamine on Friday, Nov. 1, at 7:30 p.m.

“It’s going to be the same as it has been from day one. The focus is us and us getting better each and every day. Period. That’s what has to happen,” said Buchanan. 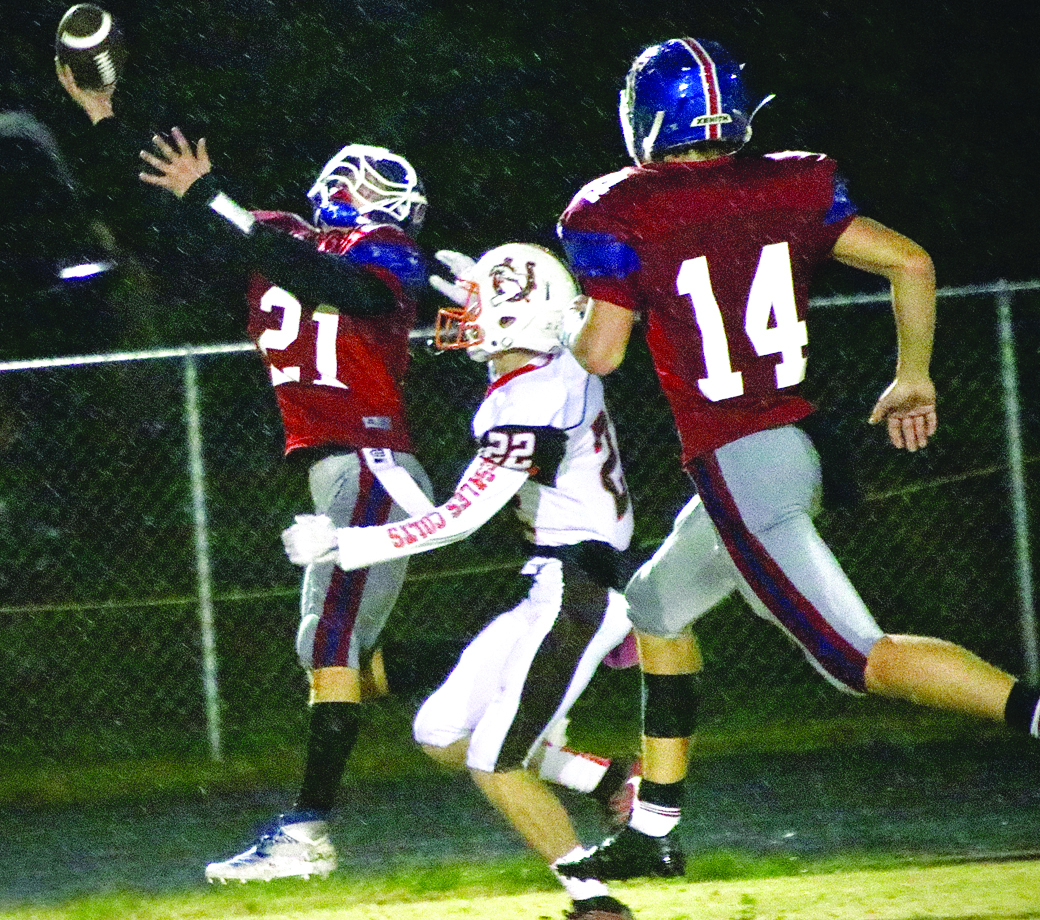 Mercer County senior Dillon Warren (21) makes a one-handed interception against DeSales on Friday, Oct. 25. Warren also had a receiving touchdown, but the Colts took the win to claim the District 4 title. 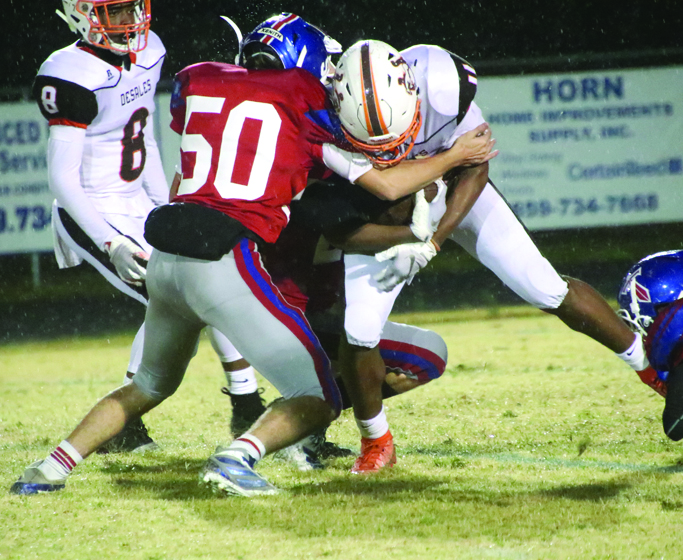 Mercer County junior Michael Sheperson makes a tackles on a DeSales’ runner against the Colts on Friday, Oct. 25, in the District 4 title game at Alvis Johnson Field. 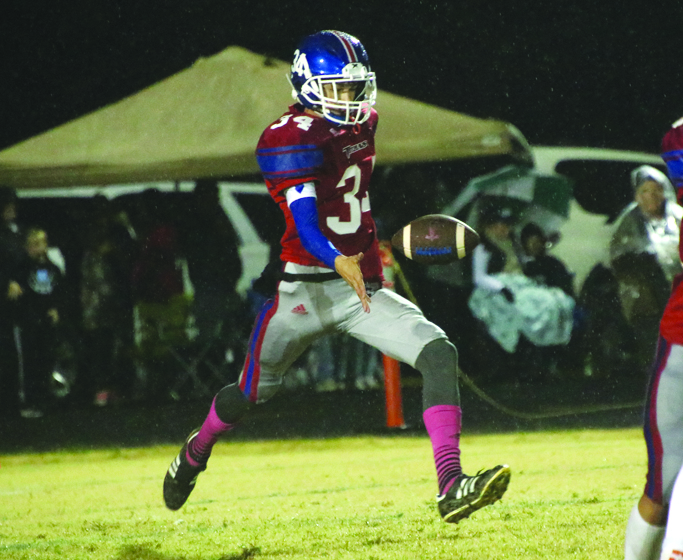 Mercer County junior Noah Davis punts the ball against DeSales on Friday, Oct. 25. Davis punted the ball exceptionally well against the Colts, including running for a first down on a fake.