Titans battle with DeSales this Friday for District title 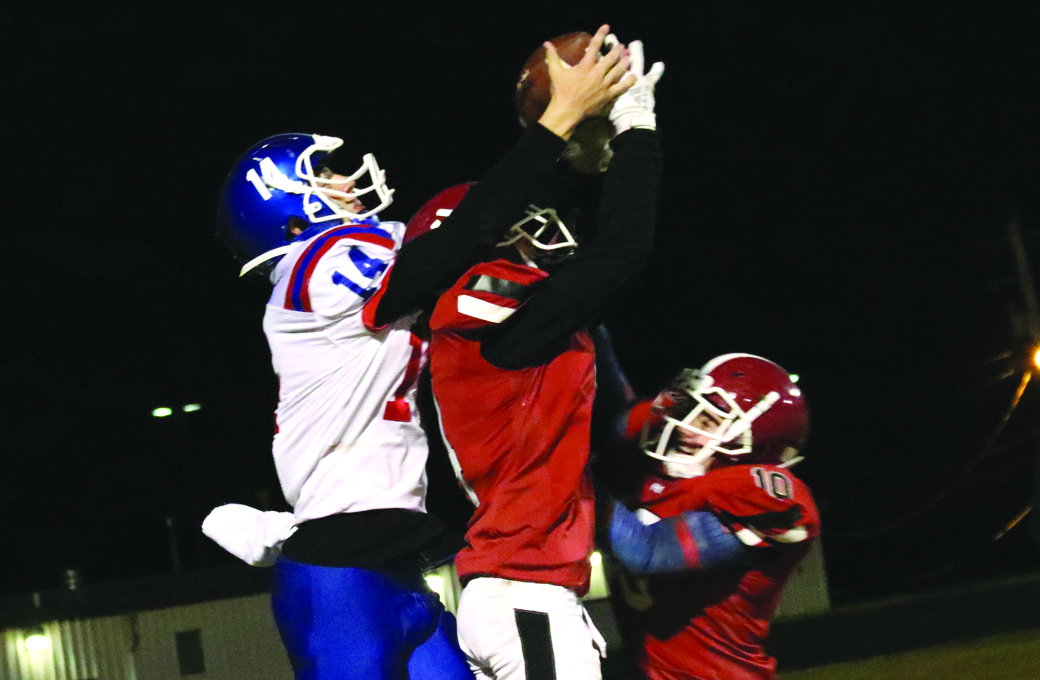 Mercer County senior Kaelin Drakeford (14) leaps over two Henry County defenders for a touchdown. The Titans defeated the Wildcats 50-7 to remain undefeated in district play and set up a showdown with DeSales for the district title. (photo by Arpan Dixit)

With a potential matchup against DeSales in late October for the district crown looming for the Mercer County Titans (7-1), it could’ve been easy to overlook their most recent opponent, the Henry County Wildcats (1-8).

The Wildcats have lost their last eight games after a season-opening victory over Thomas Nelson, but the Titans came ready to play on the road, beating the Wildcats handily by a final score of 50-7 on Friday, Oct. 18.

Mercer County senior Kaelin Drakeford had himself a day on offense. Drakeford rushed for, caught and received a touchdown in the Mercer County’s victory.

Head Coach David Buchanan doesn’t remember a time when a Titan was able to accomplish that.

“That’s probably a first. That is really cool,” said Buchanan. “Kaelin can do anything we need him to do. If I need him to play guard, he can do it. He’s a very talented young man and he showed that tonight. The big thing is, he continues to throw the ball better each week.”

On Mercer County’s first drive, senior wide receiver Jamisen Lewis caught a 53-yard pass from Drakeford for the score, but it was negated due to a block in the back. After senior Malachi Yulee got a first down on fourth and one, he ran the ball in from three yards for his 12th rushing touchdown of the season. Yulee finished the day with 25 yards on the ground.

After forcing a punt on Henry County’s first possession, Drakeford found senior Dillon Warren on a slant and Warren took it 75 yards to the house to give the Titans a 14-0 lead with six minutes left to play in the first quarter. Warren was the leading receiver for the Titans with two receptions for 76 yards.

Henry County continued to struggle on offense. Lewis was able to intercept Wildcat quarterback Eli Ammiott on the next drive. Lewis made an athletic play, getting in front of the receiver and leaping to make the interception near the Titan sideline. Drakeford later finished the drive with a 10-yard rush for the score to make the score 21-0. The touchdown was set up by a 24-yard run by senior Peyton Owens, who carried multiple Henry County defenders inside the redzone.

The Wildcats didn’t have an answer. Ammiott was intercepted again, this time by sophomore Brayden Dunn, which set the Titans up with solid field position at the Wildcats 27-yard line.

After sophomore Trosper Buchanan came in to play quarterback, he tossed an 8-yard pass to Drakeford for the score. Drakeford went over the top of two Wildcats defensive backs to make the catch, and Henry County quickly found themselves trailing 28-0 with 11 minutes left in the first half.

The Titans got another takeaway on the next possession. Yulee earned his first interception of the season, stepping in front of a receiver to pick off Ammiott. Yulee returned the ball down to the Wildcats 33-yard line. Dunn finished off the drive with a 21-yard run for the score and converted the two-point conversion. The 36-0 score with just under five minutes remaining in the half started the running clock.

Dunn was also a force on defense, blocking a punt as time expired to end the half.

Henry County received the ball to start the second half, but didn’t even get to run a play. Junior Michael Sheperson recovered a fumble to give the Titans the ball at the Wildcat 20-yard line to start the second half. The drive was finished off by a 22-yard rushing touchdown by senior Bryson Yeast, who finished the day with 43 yards on the ground.

Yeast recovered a fumble on the next Wildcat possession to give the Titans the ball at the Wildcats 10-yard line. The drive was capped off by a 10-yard receiving touchdown by Lewis from Buchanan to make the score 50-0 at the end of the third quarter.

Buchanan’s numbers as quarterback were 6-for-7 for 47 yards and two touchdowns.

“I thought he did a good job and he really benefited with all of the guys around him that did a nice job,” said Coach Buchanan. “Our kids blocked well, they caught the ball well and also ran the ball well. Jamisen (Lewis) had a touchdown so that’s really how that position goes. The guys around you can really make you and they did that tonight and Trosper (Buchanan) played pretty well too.”

Henry County was able to find the endzone in the fourth quarter on a one-yard rush by leading rusher Andrew Mays, who has 19 rushing touchdowns on the season for the Wildcats.

The Titans have the biggest matchup of the season next week. They will host the DeSales Colts (6-2) for the district title.

“When the new district realignment came up, nobody thought the district championship was going to be played in Harrodsburg,” said Buchanan. “Our guys have made it that way and I’m very, very proud of them. I think the team that played tonight was a lot better than the team that played against Western Hills a couple weeks ago. I’m just really proud of the job our kids did. I’m very excited and I do think this is our best team since I’ve been here. I don’t know what we’re going to do from here on out, but I think this is a very good football team and we just have to come back and keep working to get better.” 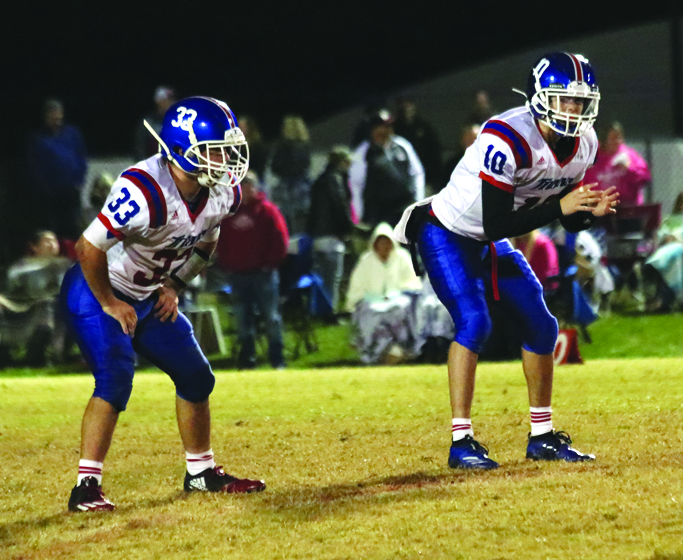 Mercer County sophomores Trosper Buchanan (right) and Matthew Brodeur (left) get set for a play against Henry County on Friday, Oct. 18. The Titans defeated the Wildcats 50-7. (photo by Arpan Dixit) 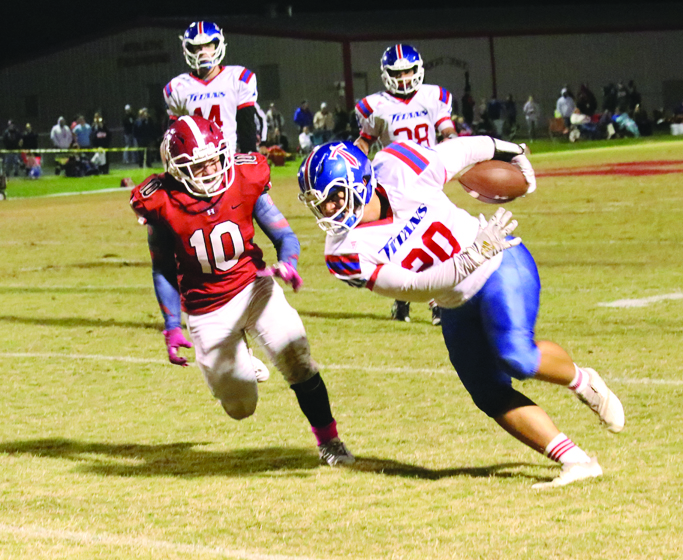 Mercer County senior Peyton Owens (right) keeps his balance during a run against Henry County on Friday, Oct. 18. Owens had three carries for 41 yards in the Titan victory. (photo by Arpan Dixit) 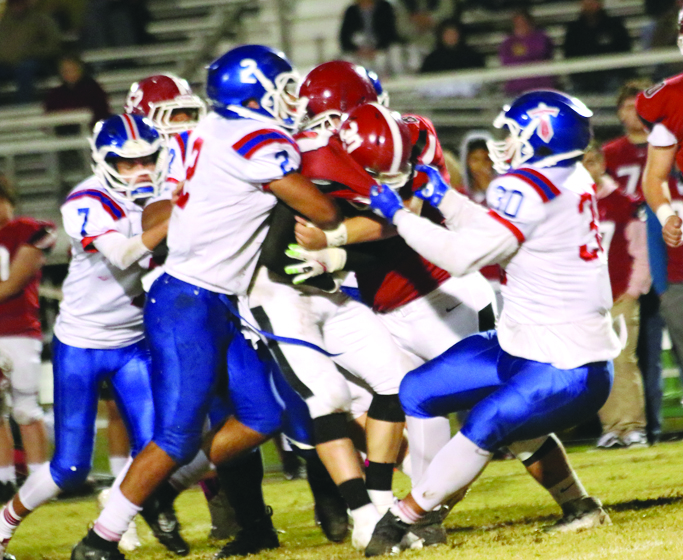 Mercer County seniors Darrian Baker (30) and Bryson Yeast (2) converge for a tackle in the first half against Henry County on Friday, Oct. 18. Both Yeast and Baker had multiple tackles. (photo by Arpan Dixit)