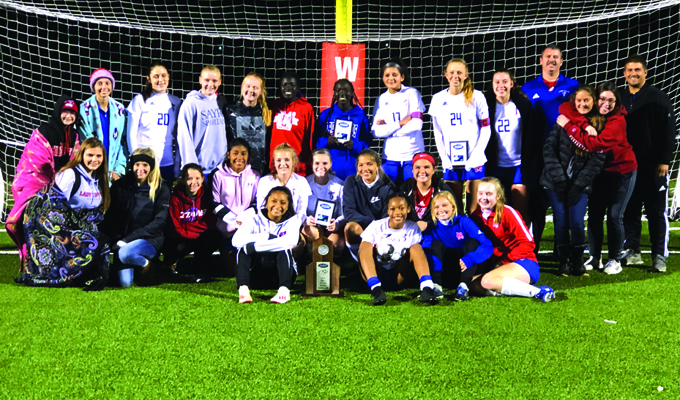 The Mercer County Lady Titans soccer team and coaching staff are pictured above with their 12th Region Tournament runner-up trophy. The Lady Titans fell 4-0 to West Jessamine on Thursday, Oct. 17. Head Coach Josh Culver’s (back row, far right) team finished the 2019 season with a record of 13-8-1. (photo by Casey Riley)

They were defeated by a final score of 4-0 by the West Jessamine Colts, who have won the 12th Region nine out of the last 10 seasons.

Despite the loss, the Lady Titans have achieved a lot in their last two region tournament appearances, making a run to the title game before falling at the hands of the Colts.

The Lady Titans defeated the Somerset Briar Jumpers and the Garrard County Lady Lions on their way to a berth in the region title game.

Here is a recap of their last two games of the tournament.

In their fourth matchup to the Colts (16-6-2) this season, the Lady Titans gave it all they had before falling to the eventual champions 4-0.

“I told our girls that I was unleashing the dogs tonight. We were just going to go down swinging and fighting. I told them to cause as much pressure as we can to cause turnovers and capitalize off of it,” said Head Coach Josh Culver. “I thought there were moments we had opportunities outside the 18 box and they (West) are always tough. We learn from it and move forward. I’m already thinking about next season.”

Caroline Absher scored the first goal for West in the seventh minute. Freshman goalkeeper Ryleigh Sipe made a save on Mackenzie Tucker’s shot attempt that easily could’ve made the game 2-0 in favor of West.

Tucker would get her first goal just two minutes later, beating Sipe for her first goal of the game. Tucker later scored in the final minute of the first half to give West a 3-0 lead heading into halftime.

Sophomore Marlie Charles attempted a shot that just went wide left with 20 minutes to play in the game. Tucker earned her hat trick in the 73rd minute to complete the scoring for the Colts. Tucker has had Mercer’s number this year, her first year at West Jessamine after transferring from Woodford County. She has 12 goals in four games against the Lady Titans this season.

Seniors Abby Steele and Abby Rogers along with junior Abby Dean were named to the 12th Region All-Tournament Team after the game and Culver was proud of the girls for giving it all they had all tournament.

“Abby (Rogers) was able to get a huge goal in the previous round against Garrard County to seal the win for us. She has been huge for us all season on that back line. I was very proud of her stepping up these past couple of games in the postseason. Abby (Steele), also in that back line, has had a phenomenal season. In a region tournament, holding teams scoreless in the first two rounds was very impressive and she was a big part of that,” said Culver. “And Abby (Dean) has been great for us all season and in this tournament. She scored the first goal against Garrard County and led us in goals this season. I know she’s one of the best players in the region and I’m glad to have her back next year.”

Sipe had six clean sheets on the season, making 94 saves and giving up 47 goals.

The Lady Titans took on the Lady Lions (15-5), the top seed in the tournament, and held them scoreless in a 2-0 victory.

“Our defense has been really solid all year. A lot of speed back there. They don’t panic. They look to control the ball and attack on offense,” said Culver.

Dean opened up the scoring for Mercer County in the ninth minute, connecting after Lady Lion goalkeeper Vanessa Hume blocked a shot that went right back to Dean, who was able to finish on the right side of the goal.

Dean’s goal was the difference at halftime.

Shots by Charles and Darland nearly went into the back of the net, but both went wide in the first 10 minutes of the second half.

With eight minutes left to play, Rogers headed the ball past Hume off a cross by Dean. The senior scored her first goal of the season at a very crucial time in the game and sealed the victory for Mercer County. 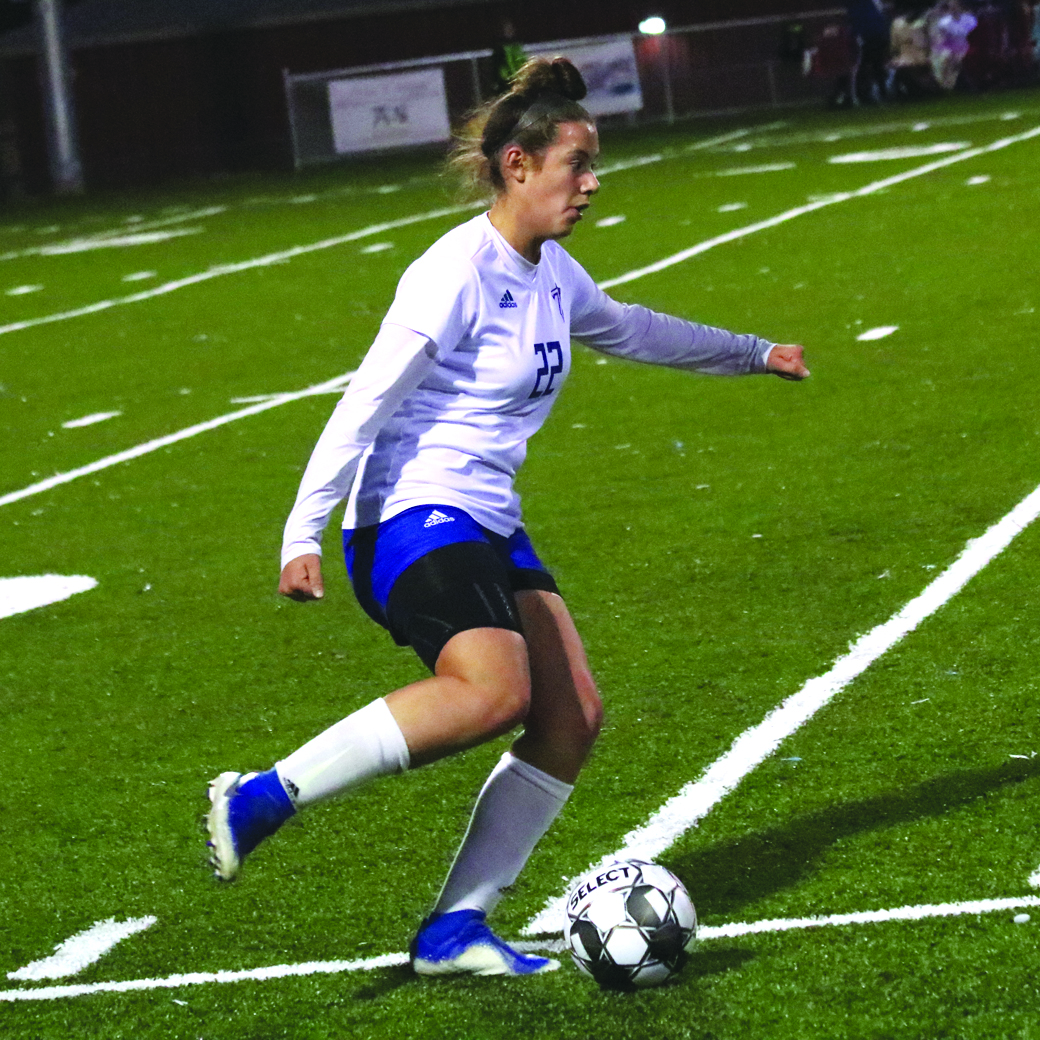 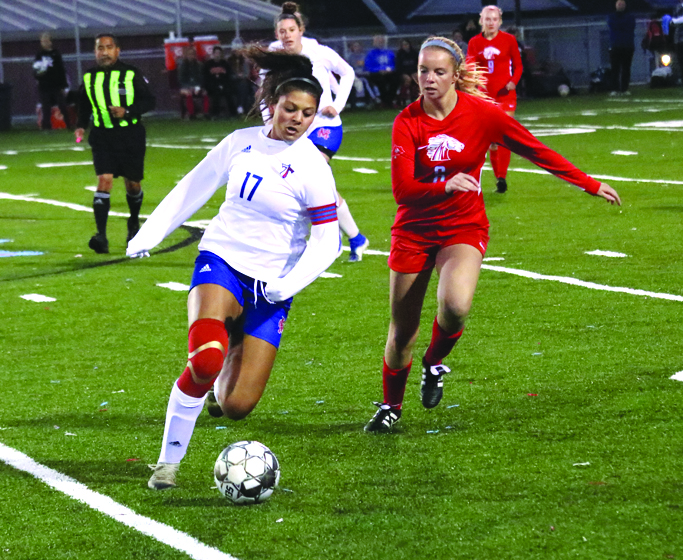 Mercer County junior Bella Garrett (17) tries to get away from a West Jessamine defender after winning the ball in the 12th Region Championship on Thursday, Oct. 17. (photo by Arpan Dixit) 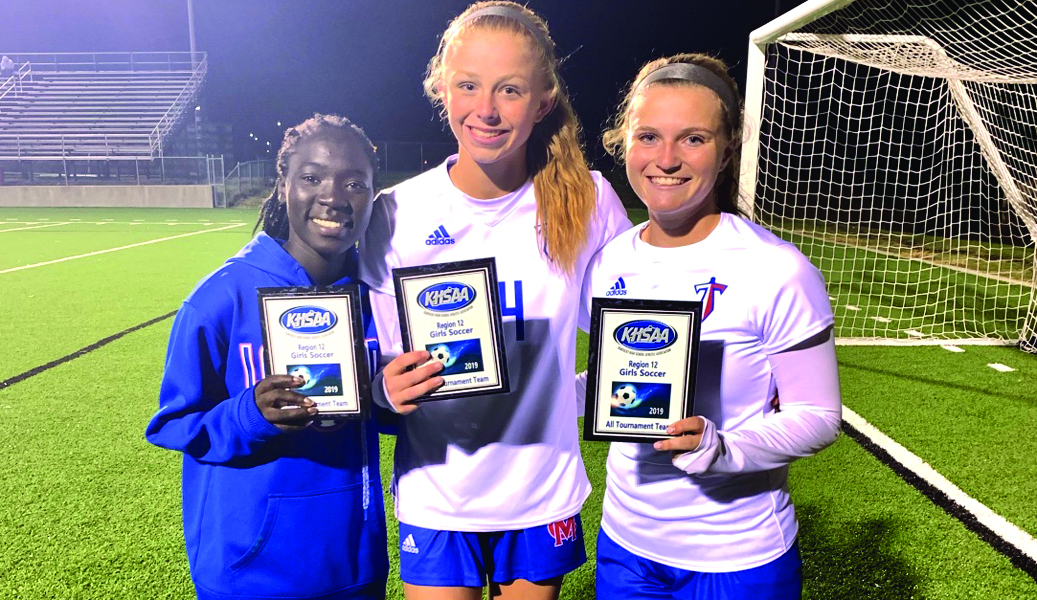 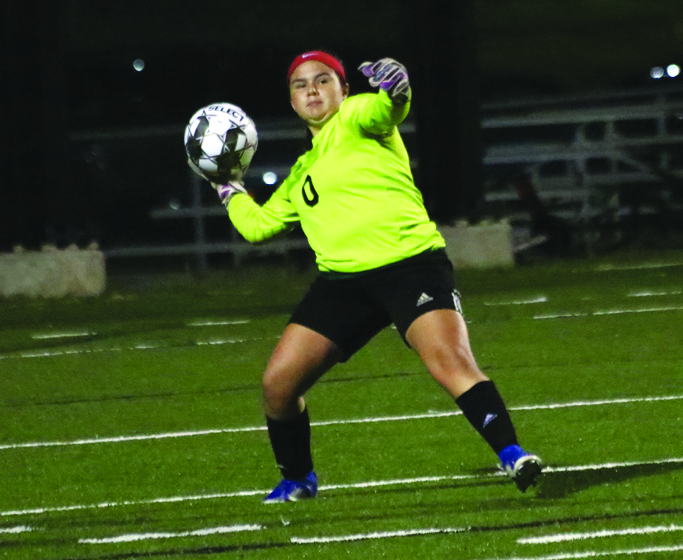 Mercer County freshman goalkeeper Ryleigh Sipe makes a save and clears the ball upfield against West Jessamine in the 12th Region Championship game on Thursday, Oct. 17. (photo by Arpan Dixit)