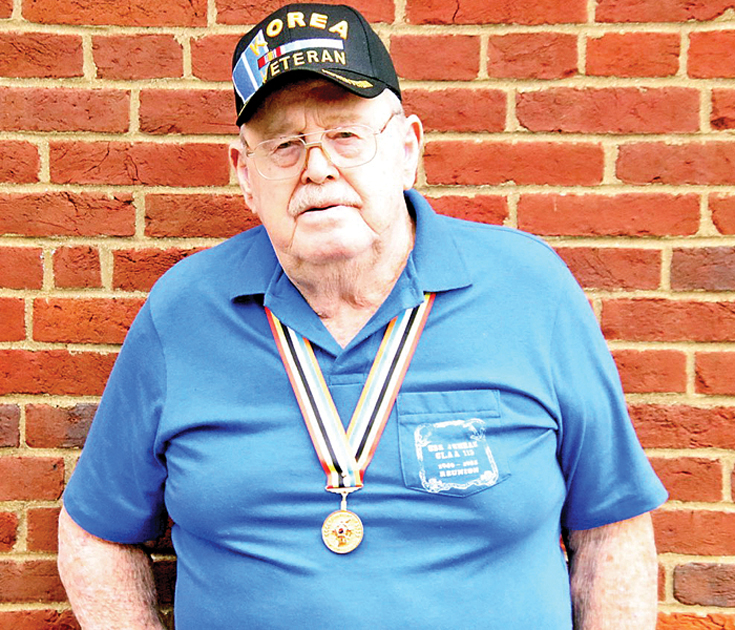 Joe Keller remembers his military service fondly and thinks it would do young people today some good.

There will be a parade on Saturday, Nov. 2, in downtown Harrodsburg. The parade is not just to honor the Harrodsburg Tankers, but all Mercer County veterans. That includes the veterans of forgotten wars like Joseph Keller.

Keller is 86 years old. He served in the United States Navy for four years, from 1952 to 1956. He saw action during the Korean War, earning a boatload of medals, including the Korean Medal, the UN Medal, the National Defense Medal, a Presidential Citation, a China Service Medal and the European and Asian Occupation medals.

“It was kind of nasty,” Keller recently recalled.

Keller was 19 years old by the time he went to boot camp in San Diego, California. Even though it was February when he left Kentucky, he said the Navy never gave him much of a chance to appreciate the sunny weather.

Fresh out of boot camp, Seaman First Class Keller was assigned to the Juneau and sent to the other side of the Pacific to patrol the demilitarized zone between North and South Korean. His job was to lock the gigantic five-inch guns on targets.

“We’d go up the coast and turn around and go down the coast,” Keller recalled. “Every now and then they’d send a few gunboats out. You know they didn’t stand a chance against us.”

Every month or so, they were sent to Yokosuka, a port on the Japan Bay, for supplies. Keller was asked if he had any fun while on liberty.

After a year in Korea, the Juneau was dispatched to the Mediterranean. Keller said his fondest memories are of the time he spent on the Med.

“I liked Italy better than any other place I was at,” he said.

Then it was back to the Pacific aboard the USS Pittsburgh. The Pittsburgh’s mission was to help Chiang Kai Shek’s followers leave mainland China.

“We went in there and got them out and took them to Taiwan,” Keller said. “We didn’t draw too much enemy fire. They didn’t bother us too much.”

Keller left the service in 1956 and returned to Mercer County “just as soon I could get here.” He and his wife Patsy have been married for 60 years. They have two daughters, two grandsons and a great-grandson. It has been a nice quiet life working on his farm, he said.

He didn’t return to tickertape parades, but Keller’s service has been recognized. On Friday, Sept. 20, he was one of around 70 veterans who received an Ambassador for Peace Medal from Consul General Dr. Young Sok Kim of the Republic of Korea and Brig. Gen. Benjamin F. Adams III (USA Ret.), the commissioner of the Kentucky Department of Veterans Affairs.

Keller said he looks back on his military service fondly.

He thinks young people today would also get a lot out of military service.

“I think everybody ought to go in the service for at least two years,” Keller said.

The Harrodsburg Tankers Memorial March and Veterans Parade happens on Saturday, Nov. 2. The opening ceremony will be at 9 a.m. at Old Ford Harrod State Park with the 5K starting at 10 a.m. and the ruck march beginning 5 minutes later.

The parade through downtown Harrodsburg will start at 12:30 p.m. There will also be a weapons display and the Travelling Kentucky Vietnam Wall will return to Harrodsburg.

The parade is for all veterans. Those with mobility issues can get assistance by contacting Jack Mattingly of the Vietnam Veterans of America at 734-0217 or via email at ​jackofalltrades0819@yahoo.com.