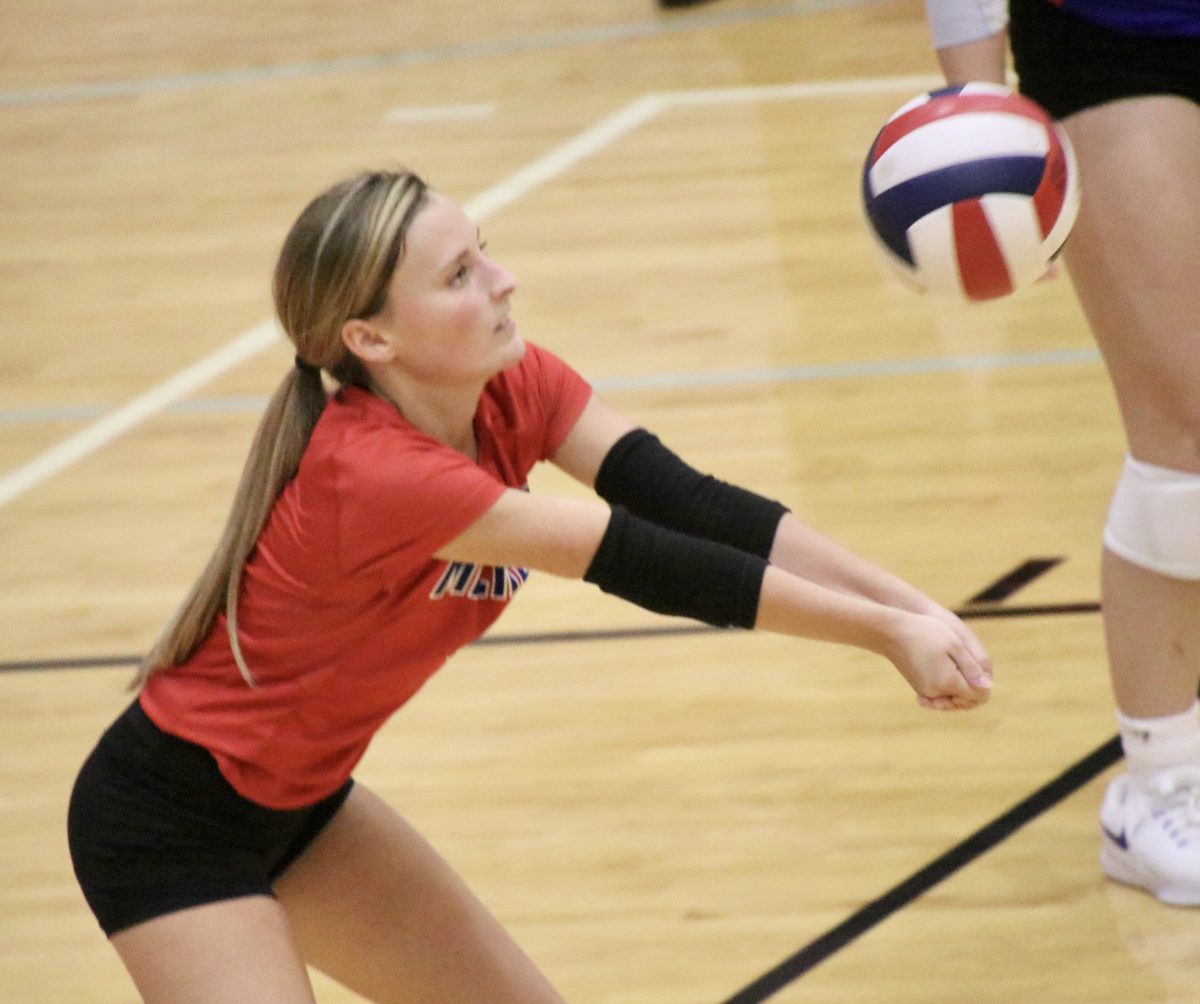 Mercer County senior Brinkley Prewitt makes one of her 257 digs this season. (photo by Arpan Dixit)

Two Mercer County volleyball records have been broken in the last two weeks. Last week, it was senior Jaclyn Devine, who broke the single game record for most kills.

This week, senior Brinkley Prewitt inserted her name into the Titan record books by breaking the single game record for digs in a game with 31 in a win over Lincoln County on Tuesday, Oct. 15.

Prewitt leads the Titans with 257 digs this season as the libero. Breaking the record wasn’t something Prewitt was thinking about.

“I think that it wasn’t something I was consciously trying to do, which surprised me,” said Prewitt. “It’s also exciting to know how much our team and I have improved from previous years. My coaches always push us and tell me how to fix any of my mistakes and stress how much we need to play together.”

Mercer County’s record sits at 16-5 with one game remaining. This is the best start they have had through this point in the season since Head Coach Lynn Flach took over back in 2016.

This group of seniors is very special to Flach. It’s her first group of athletes she has taken from their freshmen year to their senior year.

“If you would have told me their freshmen year they would be one of the best teams in the area, I wouldn’t have believed it,” said Flach.

Flach said her team, especially her seniors, have come a long way fundamentally since they started playing varsity volleyball four years ago.

“When I first got them, they didn’t even know how to hold their hands properly to pass the ball. They had no clue about base, offense or defense,” said Flach. “To think they were pretty much clueless to competitive volleyball and now they are a force to play against is amazing. It means a lot to me to have two girls break and set school records. To be honest, it isn’t surprising because no one outworks Jaclyn and Brinkley.”

Volleyball is an intense sport where players are constantly putting their bodies on the line by diving for balls across the hardwood.

“The girls has some major bruises from sacrificing her body by hitting the floor to get any and every ball up,” said Flach.

Flach said the Titans wouldn’t be where they are at this point in the season without the play of Prewitt.

“She has been a huge part of our success this year. She can pass any ball served or hit within 20 feet of her. She is one of the best liberos in our region,” said Flach. “She is very quick, has lots of hustle, stays low, goes after everything and lays herself out on the floor to make sure the ball never hits the ground.”

Flach said Prewitt is one of the most dedicated players she has coached when it comes to her craft.

“She’s very coachable,” said Flach. “She listens so well and executes everything I ask her to do. Her accuracy on passing is very consistent, which allows us to be able to have great sets and hits. Everything in volleyball starts with a serve and pass. For us this year, thanks to Brinkley, it has been great, I love this young lady and have been very blessed to coach her.”

Prewitt is also second on the team in assists and third in aces. She talked about what the Titans have to do to keep their momentum and continue their success heading into district and region play.

“We definitely have to play together and keep our momentum,” she said. “We need to keep having fun because that’s a big reason we win games.”