Somerset scores in first minute of extra time to advance 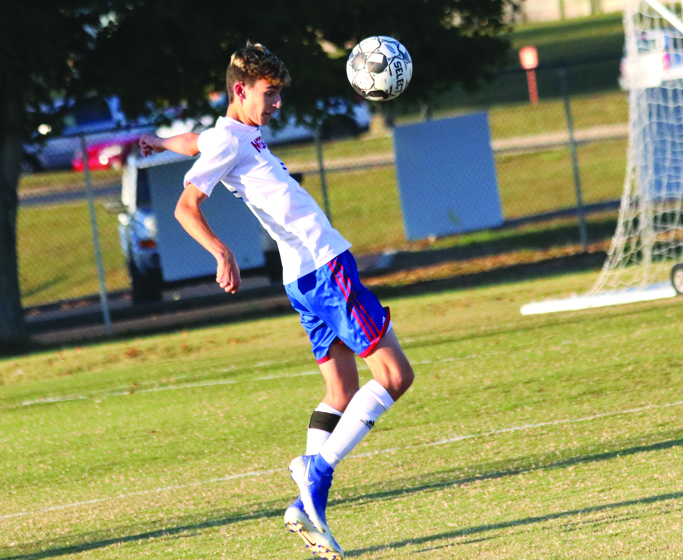 Coming into the game, the Mercer County Titans soccer team (10-8-2) had a record of 9-0 and three region titles in their last three region tournaments. That streak came to an end on Monday, Oct. 14, in a 3-2 loss to the Somerset Briar Jumpers (11-8-2) in the first round of the 12th Region Tournament at Southwestern High School.

Somerset’s Fernando Canella scored in the first minute of extra time to advance the Briar Jumpers to the semifinals.

“This night is hard for any team. Every season comes to an end at some point,” said Mercer County Head Coach Garrett Stark. “We were hoping to push further this year, but unfortunately we weren’t able to do that. It hurts the way it happened so quick in extra time because we played a hard game. I told the seniors that we were going to miss them and that I appreciate everything they’ve done for the program.”

This game was a tale of two halves as both teams exchanged goals in the first 40 minutes of the game.

Somerset’s Derek Arias scored the first goal of the game in the 5th minute as he scorched one past junior goalkeeper Aidan West.

Mercer County was able to answer 12 minutes later off the foot of senior Hunter Booth, their leading scorer with 17 goals coming into the game. Junior Sammy Berger won the ball on the right side of the field, dribbled to the corner and crossed one into the box when Booth was able to finish. The goal was set up after junior Jeron Winchester let Berger’s cross pass him and right into the feet of Booth. The Titans halted Somerset’s early momentum.

The Briar Jumpers almost took back that momentum, scoring off a rebound, but were lined up offsides in the 20th minute.

KJ Shand made up for the offsides by scoring off a rebound in the top right corner of the goal just three minutes later and Somerset held a 2-1 lead with 17 minutes to play in the first half.

Just like after the first goal, the Titans were able to answer back.

Booth was fouled from 35 yards out and had the opportunity for a free kick. He took his time and launched a strike that got past Somerset goalkeeper Pancho Zaragoza to tie the game at two. The score was 2-2 heading into halftime.

Somerset nearly broke the dead lock in the 51st minute, but West made a crucial save to keep the game tied.

With 25 minutes to play, Berger dribbled the ball down the right side and took a shot, but it ended up wide left of the goal.

Somerset switched goalkeepers in the second half, bringing in Dylan Jasper.

As tensions rose near the end of the match, the Titans nearly cost themselves on an own goal. Freshman defender Beau Brown tried to clear the ball out on a header, but the ball went backwards aiming towards Mercer County’s goal. The ball shot went past West and off the post. The play wasn’t over. The ball landed at the feet of a Somerset forward in point blank range, but the rebounded shot went wide right. Somerset players watched in agony as the game could’ve been over with seven minutes to play.

The Briar Jumpers had another chance after earning a penalty kick with two minutes to play. Tommy Wombles took the kick that went over the post as the Mercer County bench jumped for joy knowing they still had a shot to break the tie.

After those series of events, extra time was played and that was when Canella was able to send the Briar Jumpers to the region semifinals. West came out to contest the ball and wasn’t able to secure it before Canella tapped it in for the winning goal.

“Our defense is fairly young. They are most juniors with one freshman back there,” said Stark. “I thought they played well all year. It’s a work in progress with that group. I guess the good news is they are all coming back next year.”

Juniors Seth Eastman, James Johnston and Chris Day along with freshman Beau Brown man the back line for the Titans and have made a name for themselves with their play all season.

Hunter Booth, John Will Keller, John Beaven, Chase Conrad and Nate Randall suited up for the last time in a Titans uniform. Stark talked about his special group of seniors in his first year in his second stint back as Mercer County head coach.

“These seniors are just so committed to the program. I mean these guys have worked hard. Most of them have been with the program, except for one who we added this year, but to hear him say it was a very enjoyable time to be on this team meant a lot” said Stark. “

Keller played his first year of soccer, while another senior dealt with tragedy this season. Randall played with a heavy heart all season after losing his mother to cancer.

“This group was just special. You always think that about your seniors. I’m glad Nate (Randall) decided to play this year after going through what he went through. All five of our seniors made up a special group and we are going to miss their leadership. As a coaching staff, we apologize that we didn’t make it further,” said Stark.

Booth led the team with 19 goals in his senior year. Randall was the other senior to score this season with three goals.

West has four clean sheets on the season. 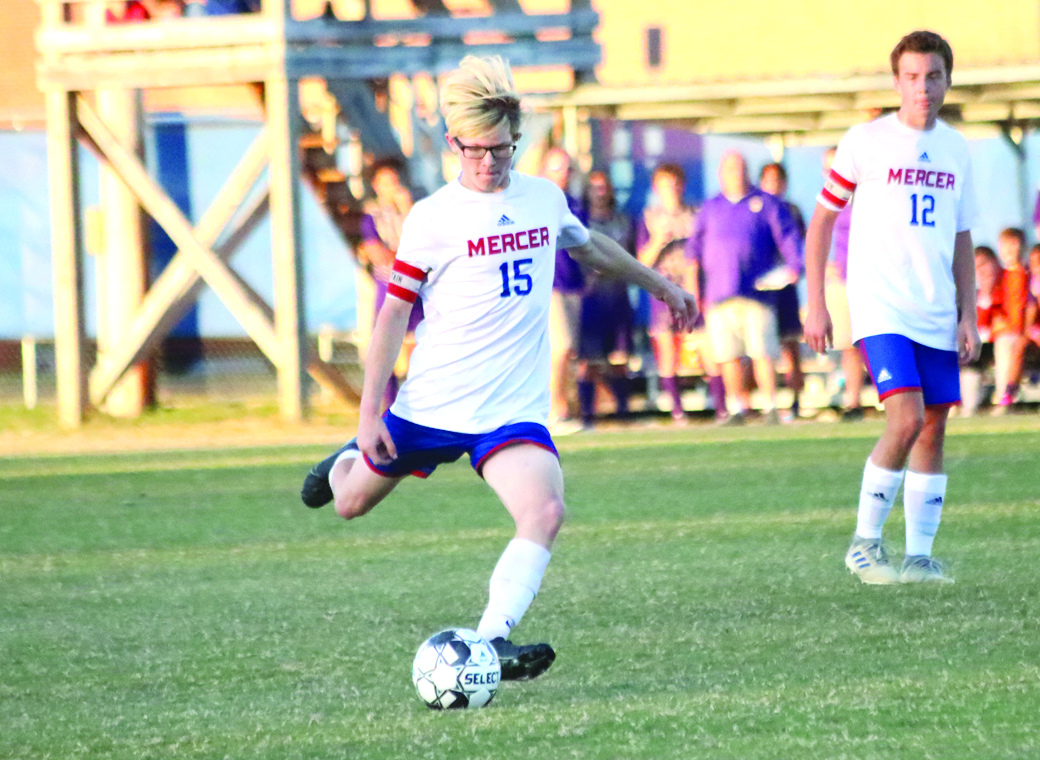 Mercer County senior Hunter Booth (15) takes a free kick against Somerset in the first round of the 12th Region Tournament on Monday, Oct. 14. Booth scored both goals for the Titans, including on this free kick from 35 yards out. 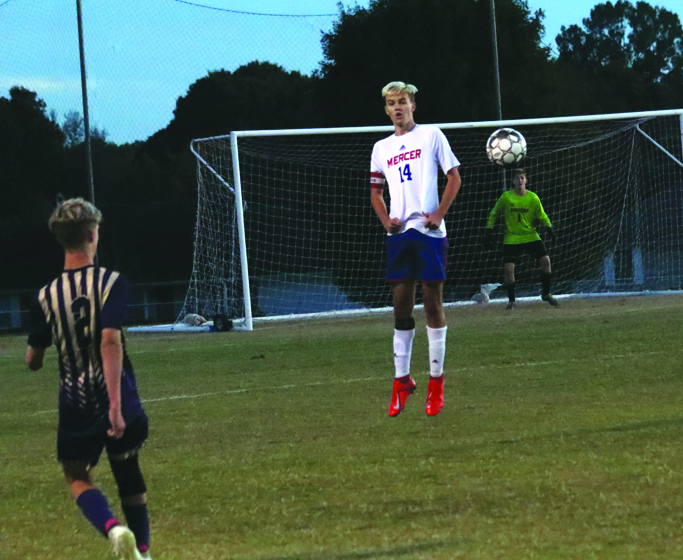 Mercer County senior Nate Randall (14) jumps to block a free kick taken by Somerset’s Chanler Edwards on Monday, Oct. 14, in the first round of the 12th Region Tournament. 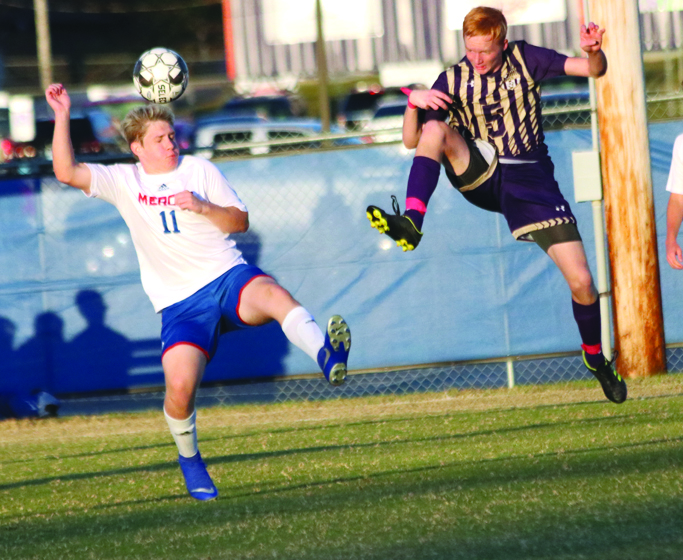 Mercer County junior Sammy Berger (11) battles for the ball with Somerset’s Dylan Coomer in the first round of the Titans and Briar Jumpers first round 12th Region Tournament matchup.