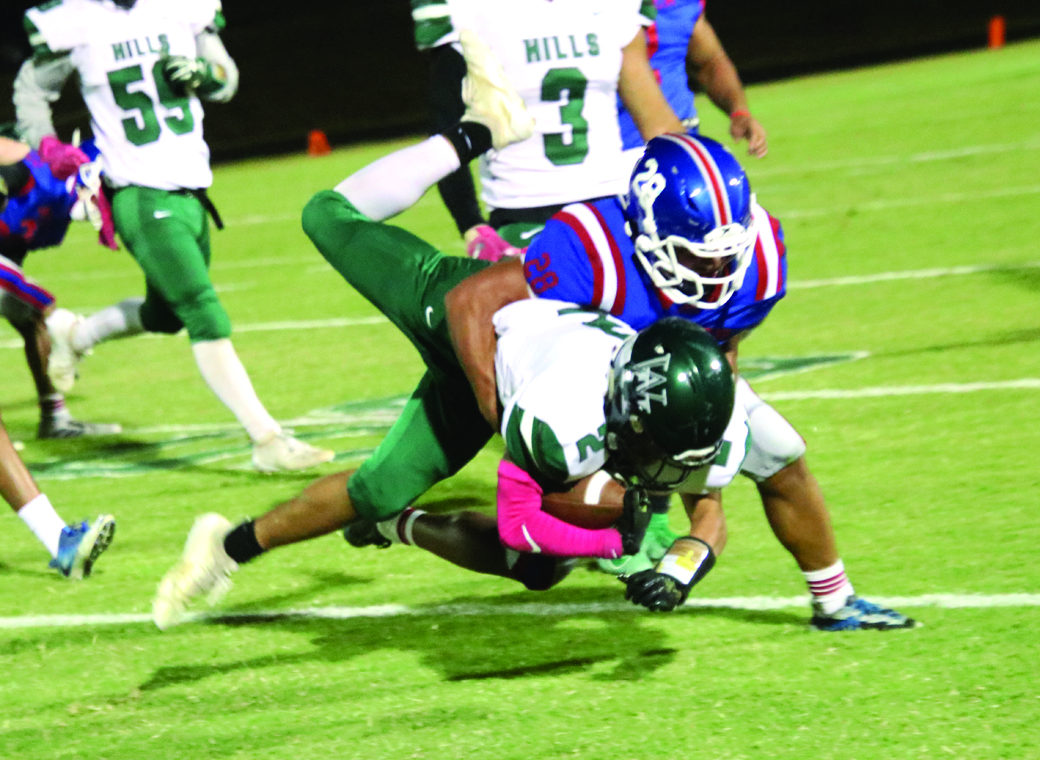 Mercer County’s (6-1) rushing attack has been their bread and butter this season, but credit must be given to their stifling defense as well, after holding Western Hills (2-4) to -40 rushing yards in the 44-6 win on Friday, Oct. 4, at Alvis Johnson Field.

“Our guys work at it hard and we’ve got good players up front and in the backfield,” said Head Coach David Buchanan. “That’s something that’s got to keep getting better and better each and every week.”

Dunn also had himself a field day on defense. He led the Titans with 14 tackles, two sacks and one fumble recovery touchdown at the end of the first half.

Senior Kaelin Drakeford also had a productive day on the ground, rushing for 43 yards and one score.

Despite the big victory, Buchanan saw some flaws in his team’s performance.

“We just had some mental breakdowns, some turnovers that were not good and some errors on the offensive end that we don’t usually make,” he said. “We just need to be cleaner, that’s all. I’m glad that we can not be real sharp and still win. Bottom line is, we just have a lot better football players right now than they’ve got. We’ve got more of them, we’re better and that’s why we won.”

Mercer County started off the game a little sluggish. One of those offensive mistakes the Titans made was on the first possession. After Western Hills forced a punt, junior Noah Davis mishandled the snap and the Wolverines recovered the ball deep in Titan territory at the 23-yard line. Fortunately for the Titans, Dunn sacked Western Hills quarterback Dylan Engle on third down. The Wolverines attempted a 45-yard field goal on fourth down that came up well short and was recovered by Drakeford, and returned 85 yards down to the Western Hills 5-yard line. Yulee ended that drive with a 1-yard run for the first points of the game.

Both teams punted on their next possession. It wasn’t until the early second quarter the Titans found the endzone again. Dunn rushed it in from 18 yards out to give the Titans a 14-0 lead. The score was set up by Dunn, who rushed for 33 yards on the drive prior to the score.

The Titans’ defense would take advantage of the poor field position for the Wolverines. After a tackle for loss, Western Hills had the ball at the 1-yard line. That was when McKitric snuck in the backfield and earned a safety, making the score 16-0 in favor of the Titans.

On the following safety punt, Hills tried an onside kick, which was recovered by senior Kobie Wessling. On the very next play, Yulee broke three tackles on his way to a 42-yard touchdown, his second of the day on the ground.

Western Hills was set to run the clock out to end the first half, but decided to air one out, and it didn’t work in their favor. Senior Bryson Yeast pressured Engler to fumble the ball, which was recovered by Dunn and taken into the endzone as the second quarter clock expired. The Titans took a 30-0 lead into the locker room. Yeast was second on the team in tackles with 11.

Western Hills would score their only touchdown of the game on a pass from Engler to Demetrius Britt for 14 yards early in the third quarter. Junior Richie Macias blocked the extra point. The score was 30-6.

Drakeford ran it in for a 14-yard score on the following drive which was set up by Yeast’s 40 rushing yards leading up to Drakeford’s score.

Sophomore Trosper Buchanan came in to play quarterback late in the second half and the rest of the game. Buchanan went 2-for-8 with 15 yards and one interception.

The stat of the night goes to the Mercer County defense for forcing the Wolverines to negative yardage (-40) on the ground.

“Our front is tough to block. Our linebackers get to the ball very quickly and I’m tickled to death with them,” said Buchanan.

The Titans have a bye week this Friday, Oct. 11, and their next game will be the following Friday, Oct. 18, when they travel to take on Henry County, another district foe at 7:30 p.m.

“Basically, our position coaches are going to pick out what they want to work on and we’ll go from there,” said Buchanan. 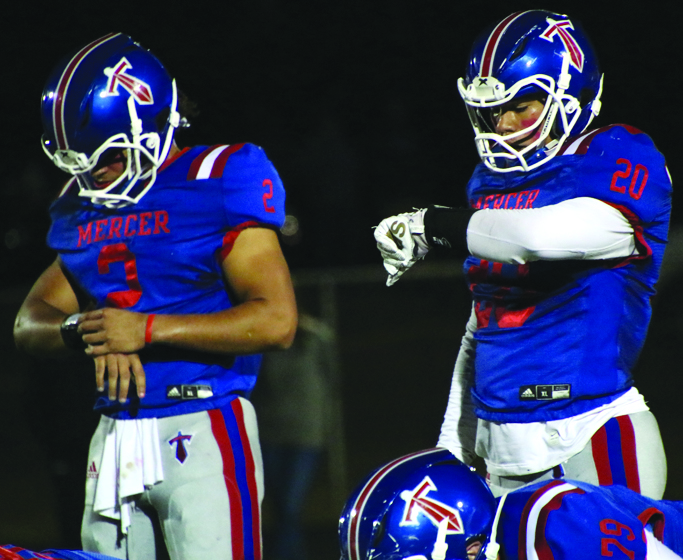 Mercer County seniors Bryson Yeast (2) and Peyton Owens (20) look at their play sheets on defense before the snap against Western Hills on Friday, Oct. 4. 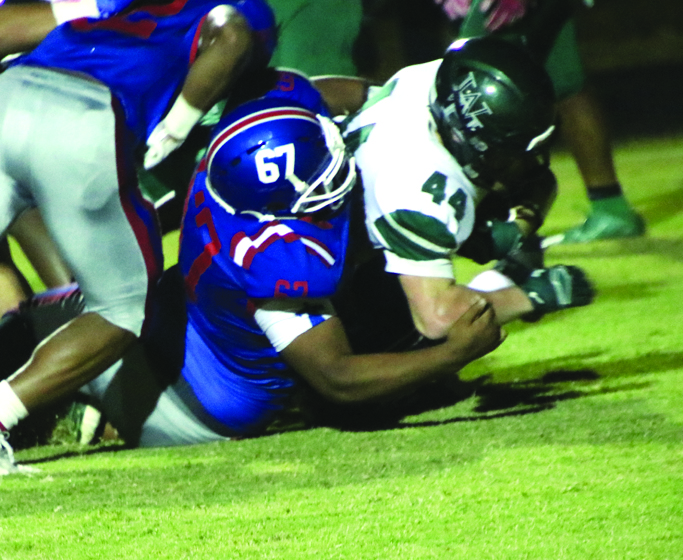 Mercer County sophomore Brent McKitric (67) gets in the backfield and tackles Western Hills’ Jacob Fields (44) for a safety in the Titans’ 44-6 victory over the Wolverines. 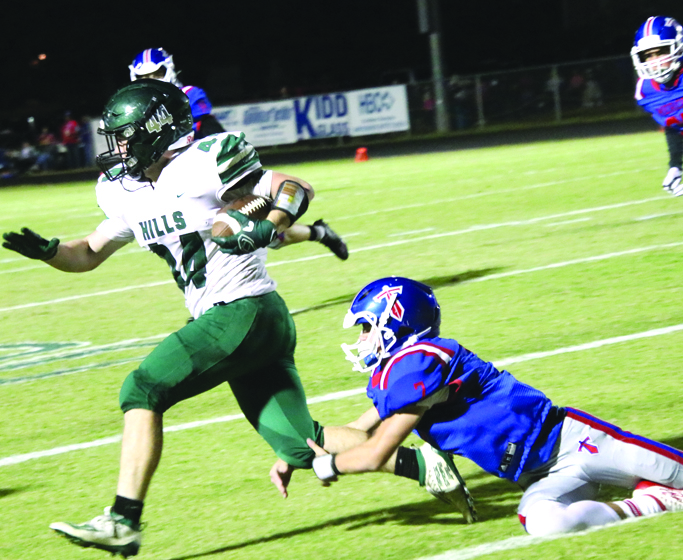 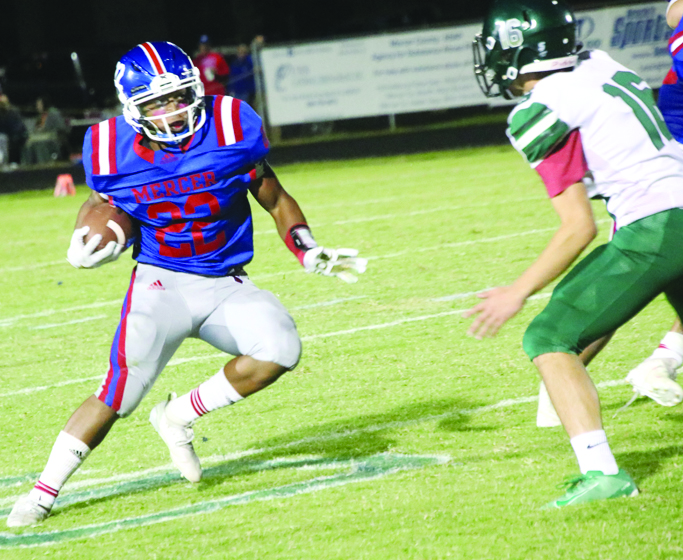 Mercer County senior Malachi Yulee (22) jukes left during a run against Western Hills on Friday, Oct. 4. Yulee had 111 rushing yards and three touchdowns against the Wolverines. 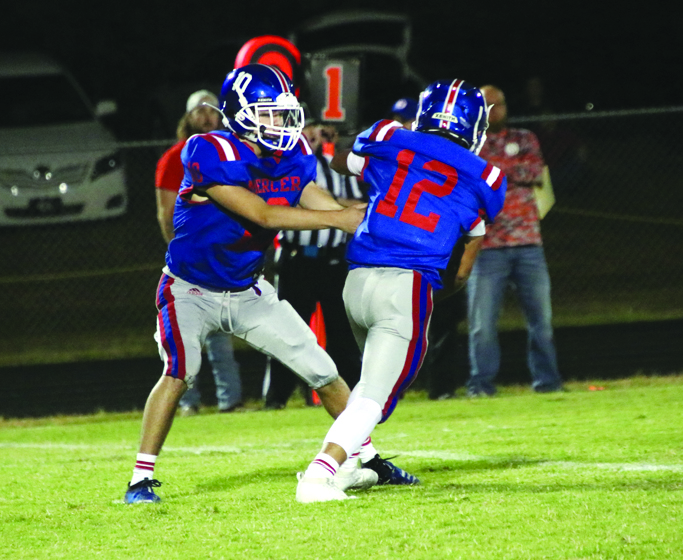 Mercer County sophomore Trosper Buchanan (10) hands the ball off to sophomore Jackson Peavler (12) late in the second half against Western Hills on Friday, Oct. 4.