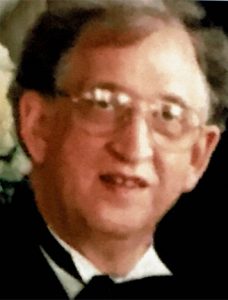 John D. Gash, Jr., 80, passed away in San Jose, California.  He is survived by his wife of 56 years, Mieko (affectionately known as Miki by her Kentucky family).

John was born in the Kirkwood section of Mercer County to Corinne Sweeney Gash and John Dudley Gash.  He graduated from Mercer County High School and from Eastern Kentucky University with a degree in mathematics and physics.  He received his masters from Santa Clara University in California.

He was employed by Lockheed Aircraft and Aerospace, and worked in Denver, Colorado, London, England, and Sunnyvale, California.  He retired in 2001  with a total of 41 years of service.  After retirement, he served as a consultant for Lockheed for several years.

He never forgot his Kentucky roots by coming back to Kentucky to visit his relatives and attending his high school reunions.  John was also an avid sports fan.

He was a member of Kirkwood Baptist Church.