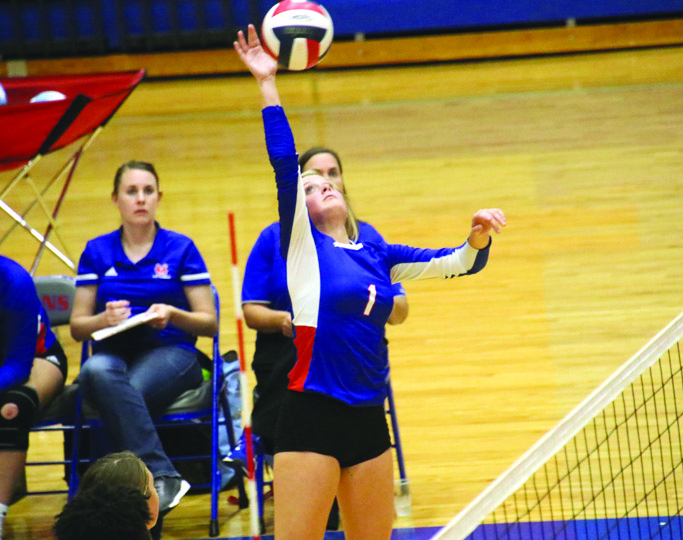 Mercer County senior Hanna Blevins goes for a kill against Casey County on Monday, Sept. 30. Blevins had 7 kills in the victory over the Rebels. (photo by Arpan Dixit)

After their season long 4-game win streak was snapped against West Jessamine last week, the Mercer County Titans volleyball team have won their last two games, most recently in a straight set victory on senior night over Casey County (9-15), on Monday, Sept. 30.

Casey County battled the third set, but having a 2-0 set lead, Flach decided to give her younger players some court time.

“I wanted everyone to get in tonight whether they were a senior or a freshmen,” said Head Coach Lynn Flach. “We were in a situation where I could do that. I wanted to get the younger players more experience on the varsity level, but then had to sub back my starters to secure the win.”

The Titans cruised in their first two sets, 25-16 and 25-13, but had to fight in the final one. Flach counted on her seniors who have delivered all season long.

“Right now, they’re just a fun group of girls. I’ve been able to lighten up compared to how I normally am because they still go out and get it done. I don’t always have to be as hard like I normally am because we can have fun and still accomplish what our goals are,” said Flach. “It’ll be hard losing them. They play so well together as a team but they are friends off the court too and that really pulls onto the court too. They’re just an awesome group of girls.”

Mercer County plays their next three games away from home (Pulaski County, East Jessamine and Garrard County) and Flach knows her team will have to be at their best heading into the last stretch of the season.

“As long as we pass well, everything else falls into place for us. We have a strong passing team,” she said. “They’ve got to learn to block out crowds, especially at East Jessamine. They just have to learn how to ignore the noise and play through it.”

The Titans will travel to Pulaski County on Thursday, Oct. 3, to take on the Maroons at 7:30 p.m.