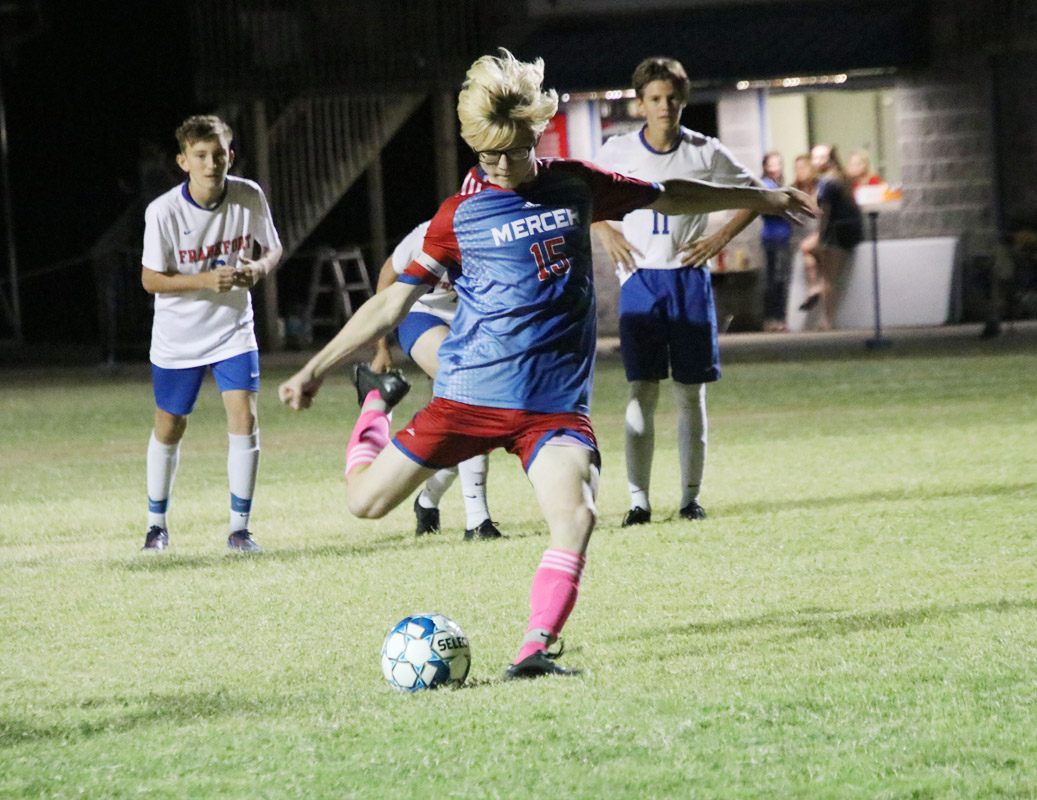 Mercer County senior Hunter Booth connected on a penalty kick against Frankfort in a 4-2 win over the Panthers on Thursday, Sept. 26. Booth scored two goals in Mercer’s victory on senior night. (photo by Arpan Dixit)

It was a tough and physical game between the Mercer County Titans soccer team (9-4-2) and the Frankfort Panthers (9-7) on Thursday, Sept. 26, which the Titans won 4-2.

Mercer County celebrated senior night and one of their top seniors, Hunter Booth, got the scoring started in the eighth minute. Sophomore Chase Mobley won the ball from the Frankfort back line and fed Booth for the opening goal.

Frankfort was able to score off the foot of Reed Miklavcic in the 36th minute and the game was a draw at halftime.

The first 10 minutes of the second half was the key to the game. The Titans came out more aggressive and were able to score off the feet of Booth off a penalty kick (42’) and freshman Gavin Wilson (47’).

“We’ve been talking about putting together 80 minutes of soccer,” said Head Coach Garrett Stark. “And we didn’t play a good first 40 minutes, but coming out in the second half, I challenged them to play with more effort. Our guys really came out and did a good job of that, putting pressure on our opponent. We were able to possess it, attack better and score more goals.”

Miklavcic added another goal in the 54th minute to cut the Titan lead to one, 3-2.

Junior Sammy Berger iced the game in the 77th minute and the Titans were victorious on senior night.

“We struggled in our previous game against Danville. We didn’t score goals and you need to score goals to win,” said Stark. “Tonight was good that we got that first goal and set the tone to let us know that we could score. Senior night is an emotional night so it’s good to get the win for the seniors.”

“It was tough last year not being with the senior group. You get attached to these guys. It’s good to be back this year after taking a year off and be with them,” said Stark. “They are great, great young men and obviously I’m happy to be back and glad they got the win on senior night.”

The Titans will be back on the field Thursday, Oct. 3, when they host Lexington Christian at 7:30 p.m.