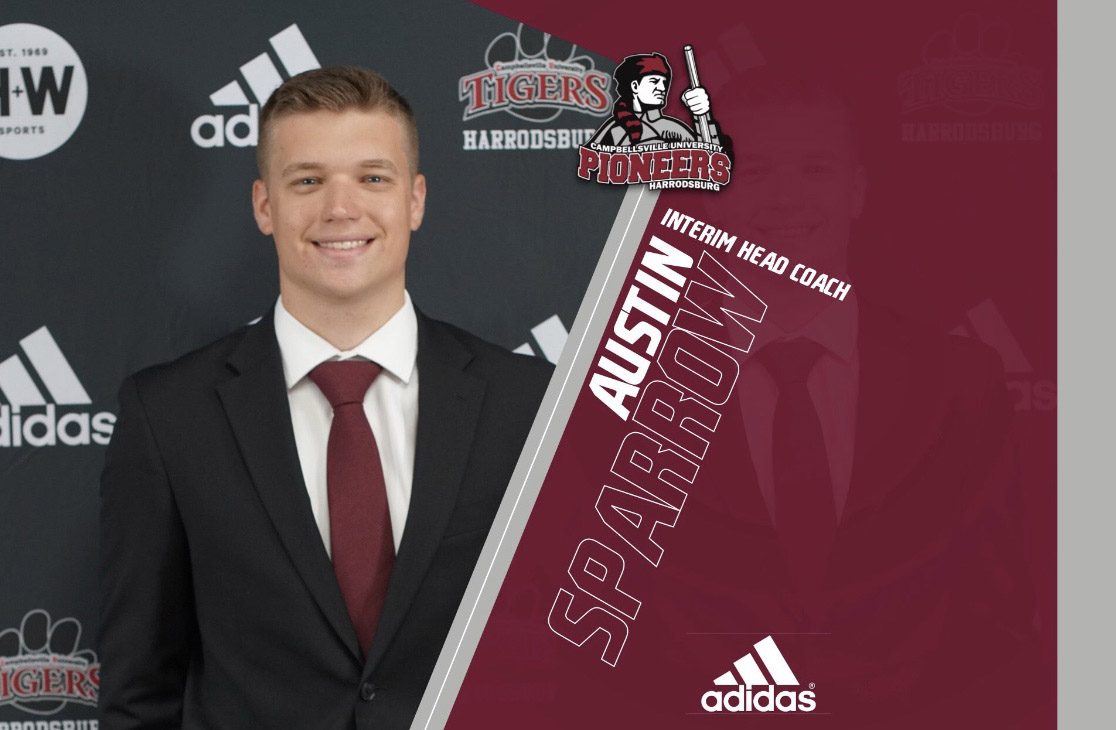 It’s a new era for the Campbellsville University-Harrodsburg men’s basketball.

After announcing their new logo a few weeks ago, another big announcement was made on Thursday, Sept. 19.

“It’s been a great first week of being the head coach here at CU-Harrodsburg,” said Sparrow. “We’ve began official practice and concluded our strength and conditioning period. It’s been an adjustment with the added responsibility of being the head coach. I am blessed to be able to wake up every day and coach basketball for a living. It’s been my dream since middle school being coached by both of my parents to follow in their footsteps and pursue coaching as a career.”

Sparrow is the youngest college head coach in the state of Kentucky, and he knows the challenges that it comes with.

“It’s definitely a challenge, but I’ve learned that it’s important to delegate your responsibilities to others that are in charge,” said Sparrow. “Relying on others isn’t a weakness and I have been able to rely on advice from other head coaches with experience like Chris Souder, Chris Starks and even my mother who was once a great girls basketball coach.”

“One thing I’m extremely grateful for in Harrodsburg with our program is that we’ve always been extremely flexible and able to adapt to anything that comes our way,” said Christopher. “Unfortunately, we had to make a transition with our men’s basketball team. While there’s never an ideal time for situations like those, it can be challenging with such a short window before the season begins.”

Sparrow talked about what he addressed during the team’s first meeting.

“I addressed the team about using this as a moment to come together as a family,” he said. “We talked about rolling with the punches and learning from the past. We will continue to get better as a program and strive to represent Harrodsburg in the best way possible.”

“I looked at our landscape within men’s basketball and felt Coach Sparrow had more than earned the opportunity to lead the Pioneers this season. Coach Sparrow, while young, has demonstrated a commitment to structure, discipline and the highest of standards both on and off the court,” said Christopher. “Coming off his tenure at Lindsey Wilson and the coaching pedigree he has grown up with around his family, I felt he was more than capable of helping us lead the Pioneers.”

Sparrow said it was an easy decision when Christopher approached him about the position.

“Dalton (Christopher) approached me about taking on more responsibilities with leading this team, he asked me if I was ready to lead this program and help take it to the next level,” said Sparrow. “It’s great being a Pioneer and representing my community through basketball. Our motto at CU-Harrodsburg is faith, family, education and basketball.”