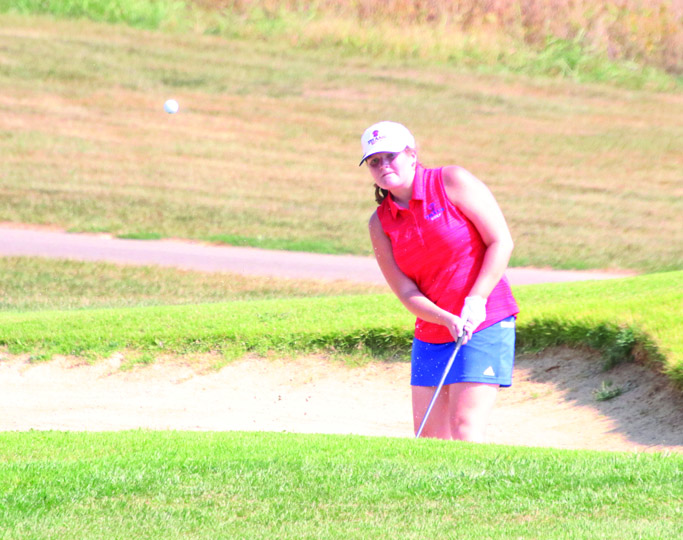 Mercer County junior Emily Bechtel hits a shot out of the bunker at the Region 4 Tournament, at Maywood Golf Club in Bardstown, on Monday, Sept 30. (photo by Arpan Dixit)

Mercer County’s only competitor, junior Emily Bechtel, shot a personal best 88, but missed out on the state tournament by two shots.

The top seven individuals qualify for state and Bechtel finished just outside the top seven.

“Shooting a personal best at the region tournament is perfect timing. We can nitpick and we can go through and find little tap ins which would’ve definitely helped improve her score, but at the same time, she probably made a few putts that she wasn’t supposed to make,” said Head Coach Jeremy Brummett. “Overall, her driving has gotten so much better. We just have to really work on the short game to get to where she can score the golf ball and that’s what we’ll focus on in the offseason. I’m proud that she handled everything the way she did, I mean, it’s over 90 degrees out here. I couldn’t be more happy for her.”

The junior started playing golf a few years ago, and has come a long way, said Brummett.

“Her maturity is showing from last year to this year,” he said. “I think that’s just part of the process of growing up, but to her credit, she’s taking the game seriously. It’s not just going out and hitting a bucket of balls. It’s working on different shots, shaping shots and working around the green. That’s the biggest thing I’ve noticed is she doesn’t let one bad hole dictate the rest of her round.”

On the eighth hole, a par three, Bechtel triple bogeyed, which prevented her from reaching a sub-40 front nine. On the 11th hole, a par four, Bechtel shot her approach over the green and into a bush, receiving a one shot penalty, eventually triple bogeying that hole.

Despite the triple bogey on the back nine, Becthel went on to par four out of the next seven holes to shoot 43.

“Last year, Emily (Bechtel) would not have recovered from those holes,” said Brummett. “That’s been one of the biggest changes of her game is to always focus on the next shot.”

Brummett talked about what he wants to see improve from Bechtel heading into her senior season in 2020.

“Putting. She has to learn consistently how to putt, how to read putts, how to manage the golf ball around the green as far as uphill putts and down hill putts,” said Brummett. “So that’s what I have to see in order for her to feel confident next season to push for a state tournament bid.” 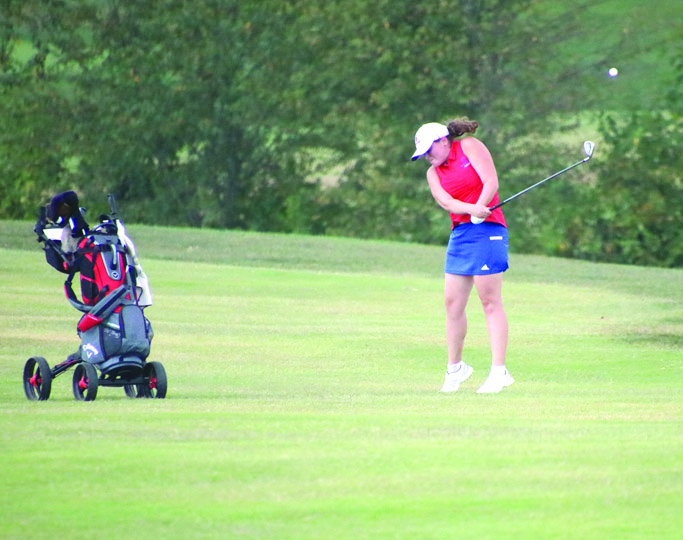 Mercer County junior Emily Bechtel hits her approach shot on the 17th hole at the Region 4 Tournament, at Maywood Golf Club in Bardstown on Monday, Sept. 30. (photo by Arpan Dixit)