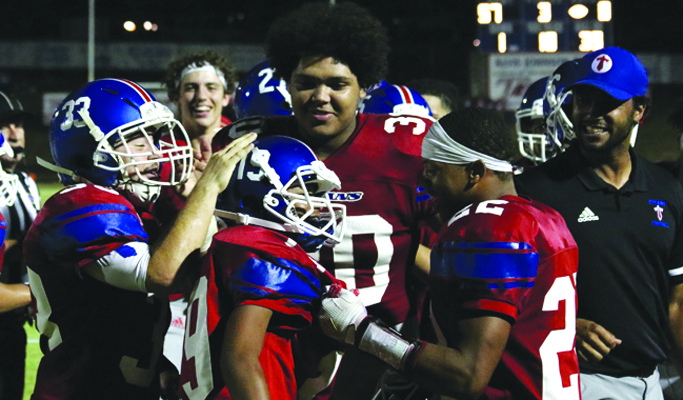 Mercer County freshman Kamrin Walker (19) is mobbed by his teammate after forcing a fumble against Garrard County on Friday, Sept. 20. (photo by Sam Warren)

After last week’s tough loss against Boyle County, Head Coach David Buchanan said his team needed to improve across the board. That was certainly the case for the Mercer County Titans (4-1) in a 64-0 blowout against the Garrard County Golden Lions (2-2), on Friday, Sept. 20, at Alvis Johnson Field.

Buchanan knew his team had to stop the run, and they did, only allowing 21 yards to Hansford and just 43 total rushing yards.

“I was really pleased with the way our kids played and right now, we’ve got a lot more better plays than they’ve got,” said Buchanan. “Our kids did a really good job tonight. Jerry Perry (Garrard County Head Coach) is one of the finest coaches and men I know and those guys will bounce back. They will.”

Mercer County’s first two plays on offense were touchdowns, courtesy of senior Malachi Yulee. The leading rusher on the team this season (536 yards, 5 TDs) took his first carry 69 yards to the end zone and his second carry for 39 yards for the score. The Titans quickly saw themselves up 14-0 just three minutes into the game.

Yulee finished the day with those two carries for 108 yards and two scores.

After forcing a turnover on downs on Garrard County’s next possession, sophomore Brayden Dunn found senior Dillon Warren in the end zone for a 29-yard score on a trick play. The Titans ran the same play against Boyle County last week, both leading to scores.

“Well, when you’re struggling to score, you do a lot of research,” said Buchanan. “I tell you what, the research shows that the more guys that touch the ball, the more likely you’re going to get an explosive play. We’ve got to be a little more creative to try to do some things that will help ourselves out offensively, and which in turn will help our defense.”

After forcing another punt, the Titans scored again on a pass from senior quarterback Kaelin Drakeford to senior Jamisen Lewis on a 24-yard pass. The Titans were up 28-0 with 3:15 left in the first quarter.

In the second quarter, Lewis took a punt back 80 yards for the score, but it was called back due to a block in the back. Despite the penalty, the Titans still managed to score when Drakeford found Warren down the sideline for 77 yards. The running clock came into effect after the Drakeford-Warren connection. The senior signal caller finished the day 3-for-5 with 142 passing yards and two touchdowns.

Senior Bryson Yeast added a one-yard touchdown run before the half. The Titans took a 43-0 into the locker room.

The Titans scored three more times in the second half.

On the following kick-off after Dunn’s second rushing score, freshman Kamrin Walker forced a fumble, which freshman Aaron Caton recovered and the Titans were in business again.

Buchanan talked about the performance of his young players who got plenty of varsity experience in the second half.

“They had a little more success than I wanted. I really wish we didn’t score like we scored,” he said. “I don’t fault our kids. It’s not our kids’ fault. I’m proud of our kids, but I wish we hadn’t got loose a few times there in the second half.”

The turnover led to a 25-yard rushing touchdown by sophomore Jackson Peavler. The Titans forced another fumble, which freshman Andrew Sheperson recovered. Sophomore quarterback Trosper Buchanan, who replaced Drakeford in the second half, took a knee and the Titans picked up their fourth win of the season.

The Titans had two takeaways on the night.

“I think we’ve played really good defense all season,” said Buchanan. “We’re going to have to be good defensively going forward with who we’re looking at.”

The Titans will be back on the gridiron on Friday, Sept. 27, when they travel to take on the Christian Academy of Louisville (CAL) Centurions at 7:30 p.m.

CAL are the defending state champions in 2A (CAL moved to 3A this season), and Buchanan knows they will be a tough challenge.

“They’ve just got a really good football team. They’re solid, the defending state champions. That pretty much says it all. We’ve got a lot of work to do,” said Buchanan.

Mercer County’s defense only allowed 54 yards of offense, compared to their 491 total yards. Yeast was the top tackler with 16 tackles against the Golden Lions. 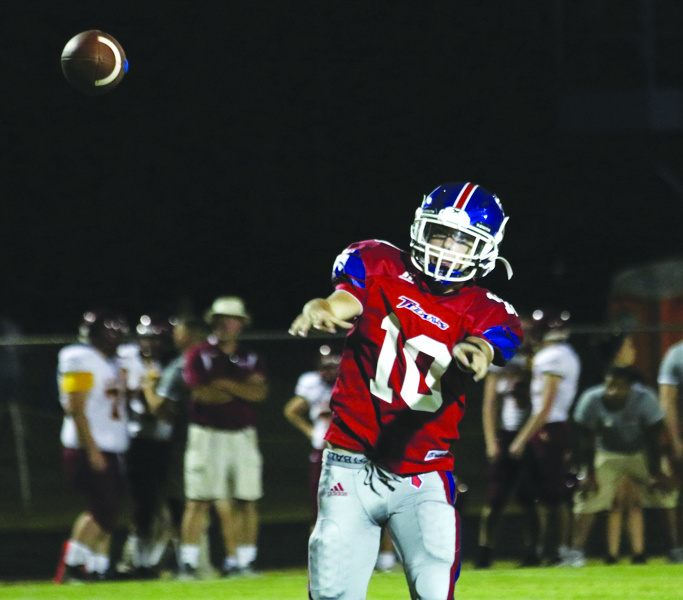 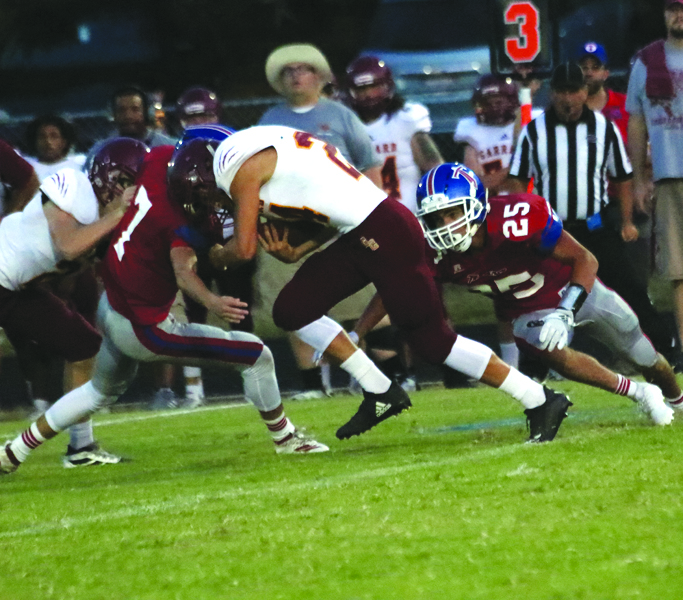 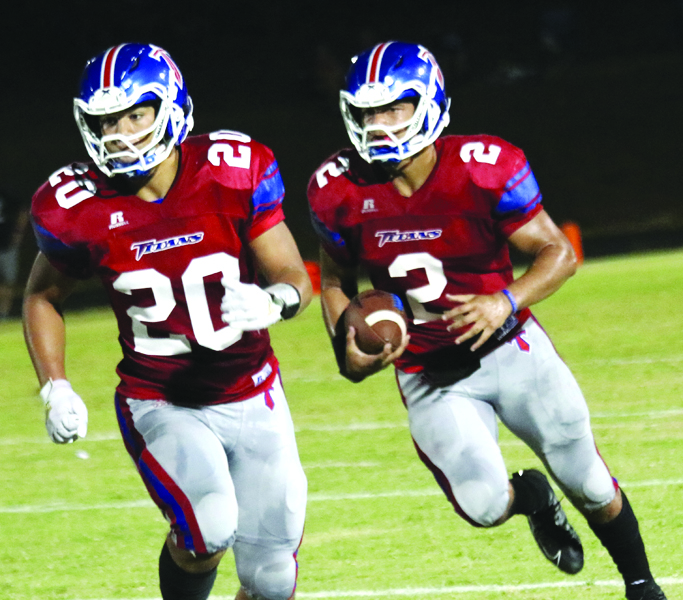 Mercer County senior Peyton Owens (20) is the lead blocker for senior Bryson Yeast (2) during a run against Garrard County on Friday, Sept. 20. (photo by Arpan Dixit) 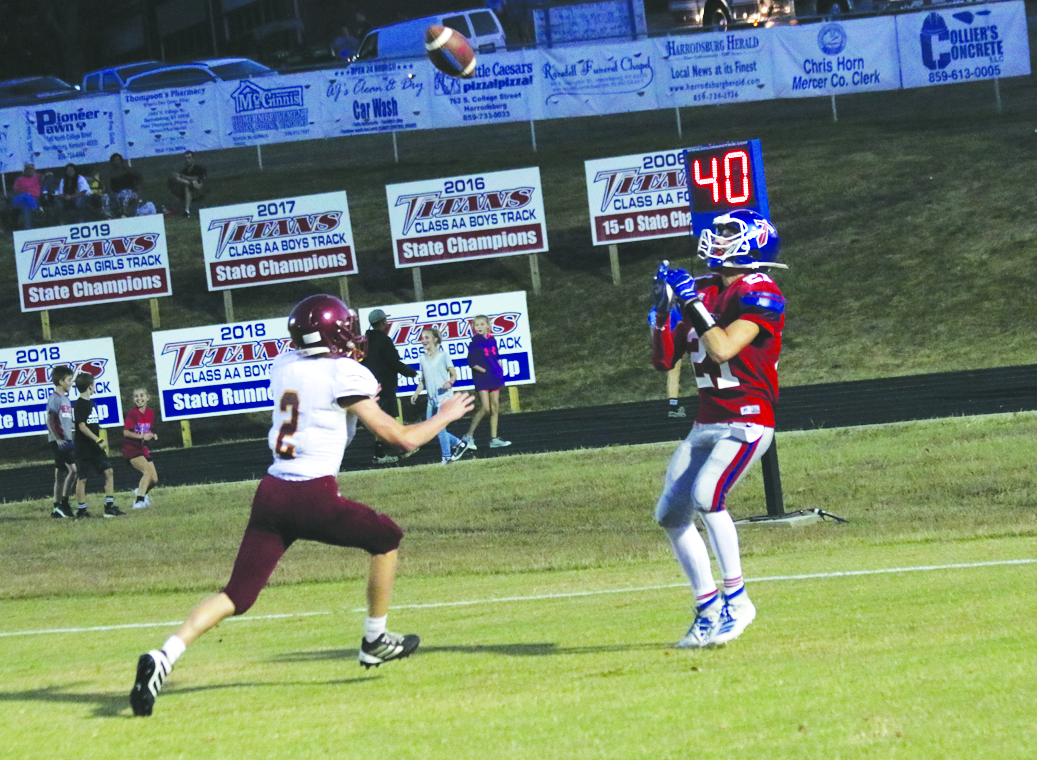 Mercer County senior Dillon Warren (right) beats Garrard County’s Austin Adams (2) and catches a ball in the back of the end zone off a pass from sophomore Brayden Dunn. (photo by Arpan Dixit)