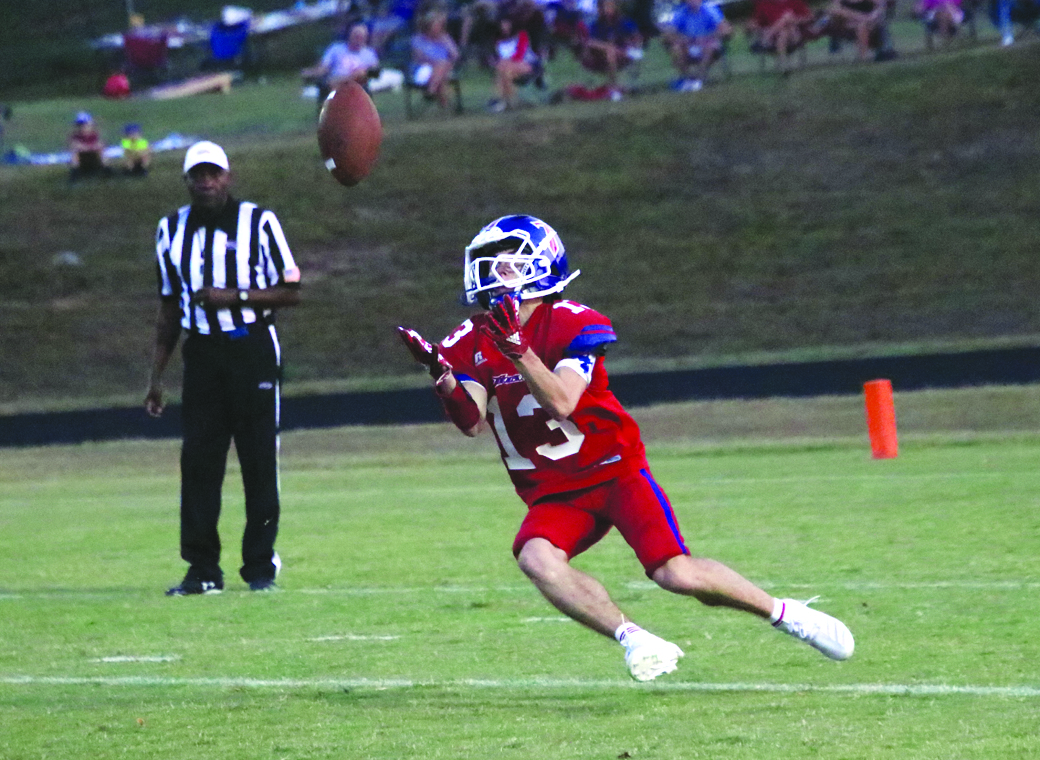 Mercer County senior Jamisen Lewis catches a punt against Boyle County on Friday, Sept. 13. Lewis also caught the longest play for the Titans on the night, a 51-yard touchdown reception on a trick play from senior Dillon Warren. (photo by Arpan Dixit)

The Mercer County Titans (3-1) came into this game with an unbeaten record, the first time that has happened under Head Coach David Buchanan.

The Boyle County Rebels (4-0) were also undefeated, and remained that way in a 43-7 victory over the Titans on Friday, Sept. 13 at Alvis Johnson Field.

The Rebels got off to a fast start against the Titans, scoring three touchdowns in nine minutes.

Boyle quarterback Reed Lanter found WVU commit Reese Smith for a 10-yard score for the first score of the game.

After forcing a punt on Mercer County’s first drive, the Rebels drove down the field and scored on a Landen Bartleson four-yard run. Bartleson will be attending the University of Notre Dame next season so the Rebels don’t lack firepower, and Buchanan gave them praise after the game.

“They’ve got a really nice team. I mean, that’s the bottom line,” he said. “We’ve got to play better when we’re playing an opponent of this caliber. That’s all there is to it. You have to just give them credit. They have a good football team.”

The Titans punted again on their next possession. Lanter found his younger brother, Cole Lanter, for a 19-yard score on a screen pass and the Rebels were quickly up 22-0 with three minutes left in the first quarter.

The Titans were able to force a turnover on downs after Boyle decided to go for it on fourth and 14. They took over at their own 43-yard line.

A few plays later, senior wide receiver Dillon Warren found senior Jamisen Lewis down the field for a 51-yard touchdown to account for Mercer County’s only score of the night. It was a trick play where senior quarterback Kaelin Drakeford took the snap, pitched it to sophomore Brayden Dunn, who pitched it to Warren before he found Lewis wide open down the field for the score.

“Well, I think in some spots, we can play some pretty good football,” said Buchanan. “But that’s not enough. We’ve just got to play better more consistently.”

Unfortunately for the Titans, the momentum following the trick play didn’t last long.

On the following kick-off, Gray Rahbany returned the ball 70 yards for the score.

On the following Titan drive, Drakeford was picked off by Smith at the Boyle 39-yard line. The Rebels marched down the field and scored again on a Bartleson two-yard run up the middle.

The Rebels took a 36-7 lead into the locker rooms.

“We’ve just got to do better. We’ve got to coach better, we’ve got to practice and we’ve got to play better. Plain and simple,” said Buchanan. “We’ve got a lot of work to do. In spots, we did some good things tonight, but spots isn’t good enough.”

Boyle County scored one more time on a Will McDaniel four-yard run with eight minutes left in the ball game.

The last time the Titans took down the Rebels was in a 31-30 contest in the 2013 playoffs. Since then, the Rebels have outscored the Titans 192-23 in four meetings since.

Lanter finished the game 19-for-26, with 250 yards and two touchdowns for Boyle.

Drakeford finished 5-for-11, with 42 yards and one interception. Warren, who threw the ball on the trick play to Lewis, was 1-for-1, with 51 yards and one touchdown.

Drakeford was the top rusher for the Titans, rushing the ball seven times for 29 yards. Senior Peyton Owens was second with nine rushed for 25 yards. Senior Malachi Yulee, who was the Titans leading rusher heading into the game (413 yards, 3 TDs), was held to 15 yards rushing on five carries.

Andrew Sacco led the Rebels in rushing with six rushed for 31 yards. Bartleson rushed the ball 11 times for 26 yards and two scores. Will McDaniel rushed six times for 29 yards and one score.

Reese Smith led Boyle in receiving with six catches for 100 yards and one touchdown. Cole Lanter caught five passes for 66 yards and one score.

Lewis was the top receiver for the Titans with one catch for 52 yards and one score. Warren caught four passes for 37 yards. Senior Kobie Wessling was the third and final receiver to catch a pass for the Titans, hauling in one pass for five yards.

Senior Bryson Yeast was the top tackler for the Titans with 11 tackles. Seniors Darrian Baker and Isaiah Dismuke led the Titans in tackles for loss, with two each. Junior Bryce Walton had one tackle for loss.

Wilson Kelly led the Rebels with eight tackles, two of them for loss. Smith accounted for the only takeaway of the game with one interception.

Buchanan kept it simple when talking about what the Titans need to do before their matchup with Garrard County on Friday, Sept. 20.

The Rebels had 372 yards of total offense, compared to 172 yards for the Titans.

The Titans will take on the Golden Lions at 7:30 p.m., Friday night, at Alvis Johnson Field. 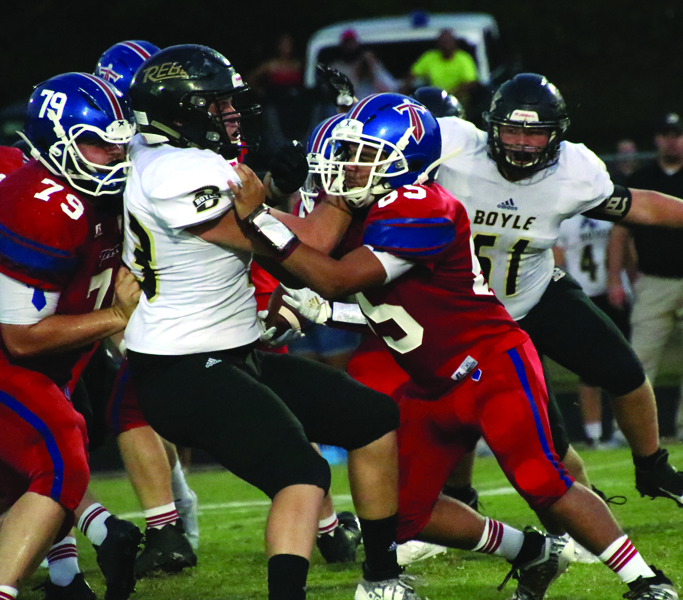 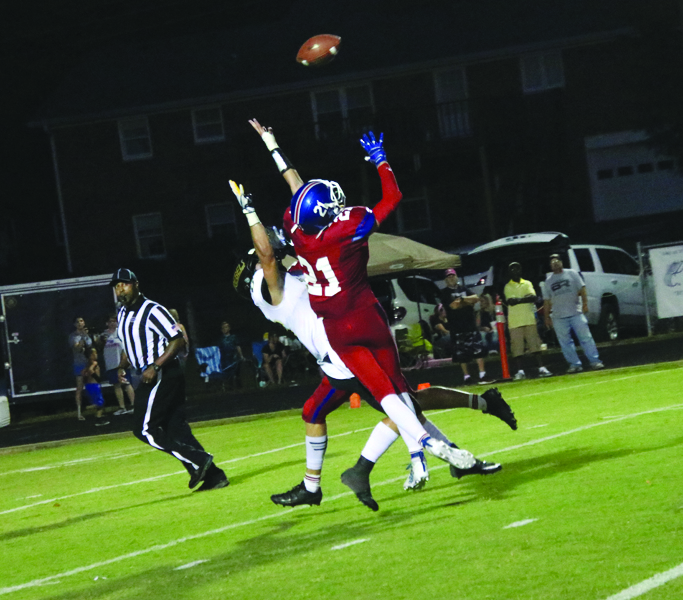 Mercer County senior Dillon Warren (21) makes a play on the ball that led to an incompletion against Boyle County on Friday, Sept. 13. 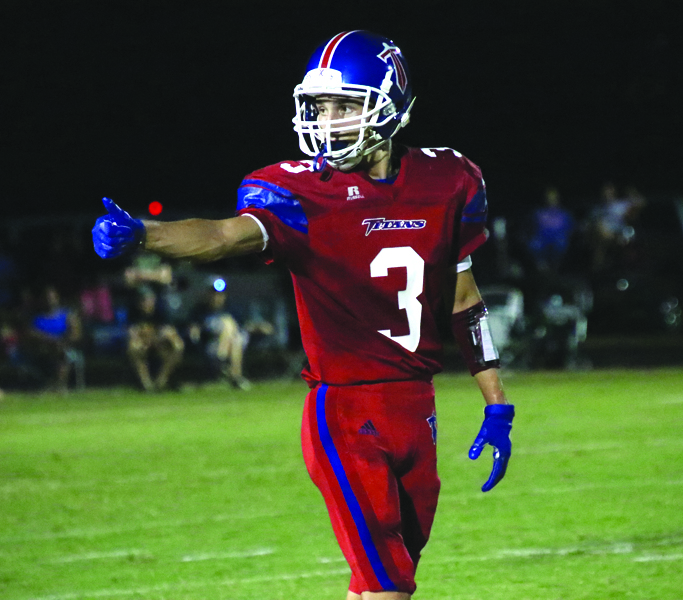 Mercer County senior Kobie Wessling looks at the referee to make sure he is on the line of scrimmage against Boyle County on Friday, Sept. 13.