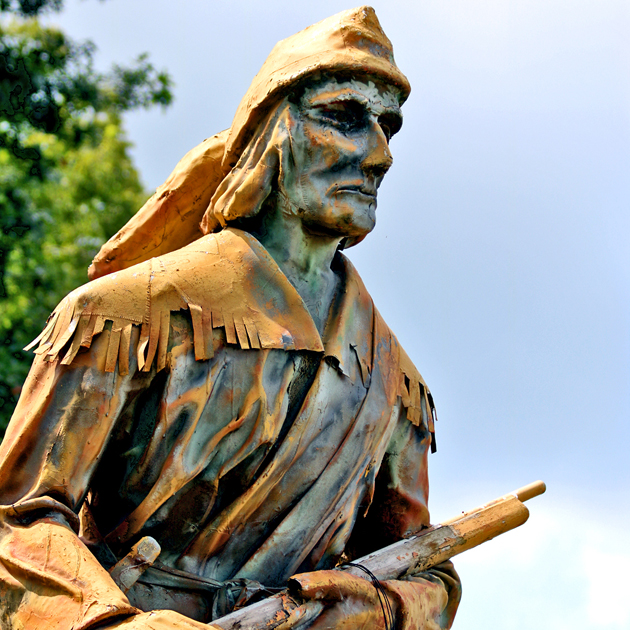 Pioneer Man, the fiberglass statue that has sat outside Old Fort Harrod State Park for over a decade, was taken down because the state decided to erect a new sign at the park entrance. Pioneer Man currently resides in the James Harrod Amphitheater and is badly in need of repairs.

Pioneer Man, the coonskin-cap-wearing statue perched near the entrance of Old Fort Harrod State Park, was taken down for repairs, not because of so-called political correctness.

“It wasn’t pressure, it wasn’t political,” said David Coleman, who manages the park.

However, the fiberglass figure is not out of the woods yet. The state is replacing the sign where he sat for over a decade with a new two-sided sign. While the new sign will include a silhouette of a pioneer man, it will not include the Pioneer Man statue.

“He’s got no place to sit,” Coleman said.

The figure has sat outside the park since the outdoor drama, “The Legend of Daniel Boone,” ceased production in 2005, Coleman said. While the park manager doesn’t know how old the statue is, he said it originally sat in the James Harrod Amphitheater. And that’s where Pioneer Man, all two pounds of him, can currently be found.

“He is now residing in the amphitheater where he was born,” Coleman said.

That’s a good thing because being out in the elements has really done a number on the pioneer, Coleman said.

“He’s so fragile. He’s in rough shape,” Coleman said. “He needs to be sitting somewhere out of the weather.”

The City of Harrodsburg recently adopted a new logo that does not feature the pioneer, who has served as a symbol for the area since at least the 1920s. Even though city officials have insisted they have no intention of replacing the pioneer figures that can currently be found at the city limits, many have complained about what they see as efforts to erase Harrodsburg’s heritage.

Coleman said there is no connection between the city rebranding itself in time for its 250th anniversary and the removal of Pioneer Man. The decision to replace the sign was made in Frankfort, he said.

In the past, the park manager has said Pioneer Man “would certainly get my vote” as a symbol for Harrodsburg. But Coleman has also said he wishes the fiberglass frontiersman was more historically accurate. None of the pioneers connected to Harrodsburg—James Harrod, Daniel Boone and George Rogers Clark—wore  coonskin caps.

The now iconic image of the hardy frontiersman in buckskin and coonskin cap was created in the 1950s, when Disney’s “Davy Crockett” TV series starring Fess Parker first aired. For many, the image of Parker, who also played Daniel Boone, is what they see when they imagine Harrodsburg’s colonial past.

So when Pioneer Man went missing, the park started getting phone calls from concerned residents. But Pioneer Man doesn’t need a petition, he needs a fiberglass repairman.

“If we could find someone to repair him, that would be awesome,” Coleman said.