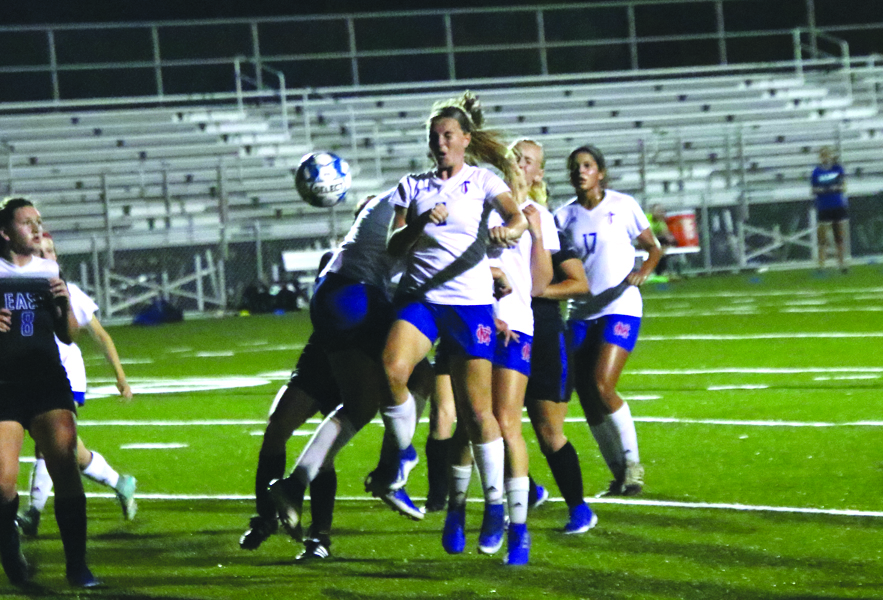 Mercer County senior Abby Rogers (front) heads a ball out of the air off a corner kick in a big district win over East Jessamine on Thursday, Sept. 12, completing the regular-season sweep over the Lady Jaguars. (photo by Arpan Dixit)

The Mercer County Lady Titans soccer team (6-3) have had a bad taste in their mouths after losing in the first round of  the district tournament last season to the East Jessamine Lady Jaguars (2-9).

In 2019, the Lady Titans got their revenge by completing the regular-season sweep, most recently in a 4-1 victory on Thursday, Sept. 12, and have  scored eight goals against East this season, while only giving up one goal.

Sophomore Emma Kiernan scored the first goal of the game (20’) and just two minutes later, assisted sophomore Love Mays (22’) for the second goal for Mercer County. Mays is tied with junior Abby Dean for the team lead in goals with six.

“She (Kiernan) is very skilled with the ball, has a great first touch and she sees the field very well,” said Head Coach Josh Culver. “We moved her around a little bit to get her to try something different and it worked out for us. She was able to get more touches on the ball and was able to create a little more offensively.”

The Lady Titans took a 2-0 lead into halftime and came out the second half even more aggressively. Sophomore Marlie Charles scored the first goal of the second half (48’) off an assist from junior Bella Garrett.

East Jessamine countered 17 minutes later with a goal by Katie Turner (65’), but the Mercer County defense was flawless from there on out, something Culver was very pleased with.

“This is our first game on turf this year so I knew it would take a little bit of time for us to get settled. Once we settled in, I thought we did a great job of moving the ball, with defense and getting numbers up,” said Culver. “I thought it was excellent. I was very happy with the play today.”

The Lady Jaguars took advantage of Mercer County’s slow start on the turf, earning a few opportunities within the first 20 minutes, but were not able to get past Lady Titans goalie, freshman Ryleigh Sipe.

“They attacked us with speed. Just coming out hard. We came out slow, they came out hard and put pressure on us early,” said Culver. “We’ve had a tendency this year to come out a little bit slow to begin with, and we’re getting into the middle of the season now, so we have to get over that hump. I’m proud of the girls for settling in, finally working the ball and we do great things when we’re moving the ball.”

Charles added another goal, her second of the game, just before the final whistle (78’). She is third on the team in goals with four goals through the first nine games.

The Lady Titans have the Spine Center Showcase coming up at Boyle County High School. They will take on the likes of Paul Lawrence Dunbar, Louisville-Eastern and Madison Southern this week.

“The defensive game we had against West Jessamine last week is hopefully how we can perform the rest of the season,” said Culver. “Building off of that against these tough teams coming up, being able to build up those passes, find feet and find space will be the recipe for success. They are out there doing the right things. They may not work perfect every time, but they’re doing it correctly. Sometimes it’s a missed shot or missed pass, but it is what it is. But, I think we do a good job of getting back and our defense does a great job of stopping it so hopefully we can continue that.”

Mercer County will play the final game of the Spine Center Showcase on Saturday, Sept. 21, against the Madison Southern Lady Eagles. Game time is set for 12 p.m. 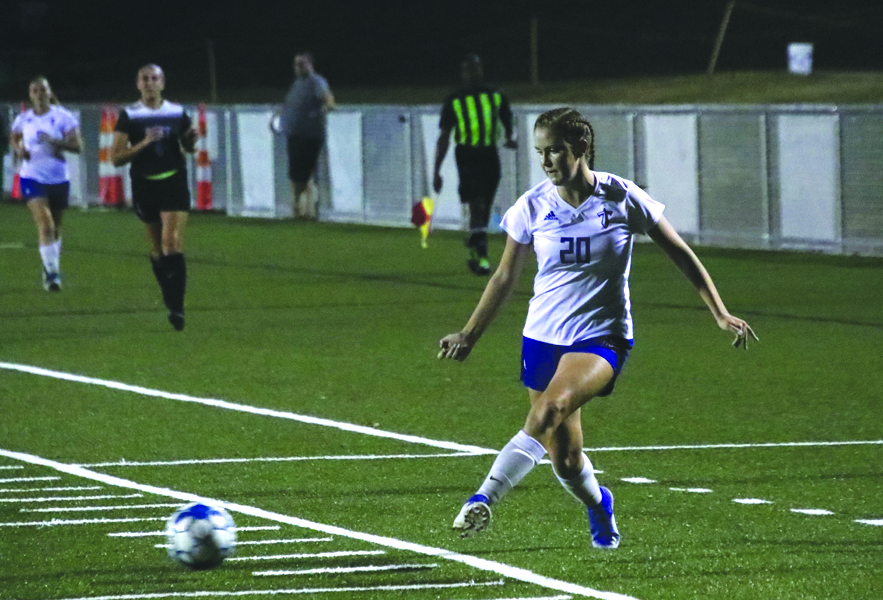 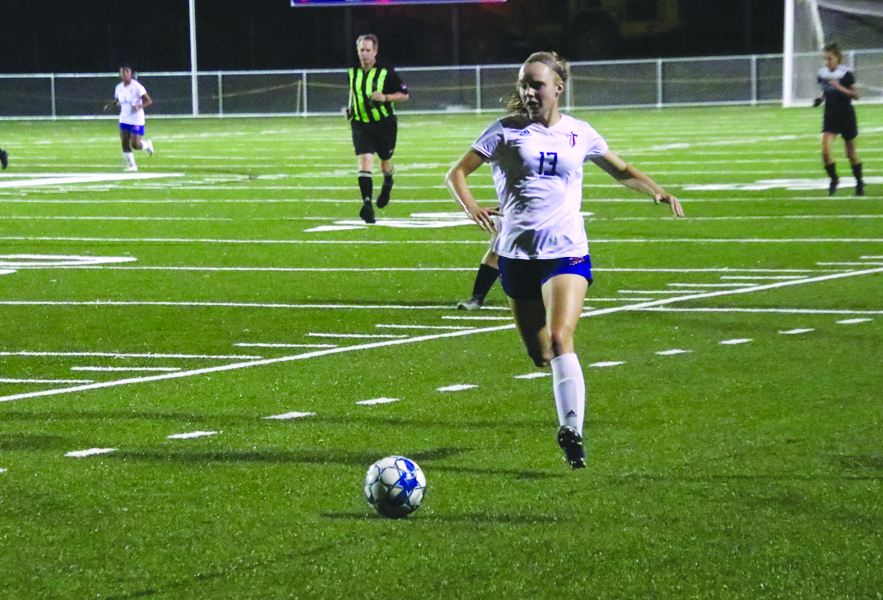 Mercer County sophomore Emma Kiernan races down a ball in East Jessamine’s side of the field in a district matchup on Thursday, Sept. 12.