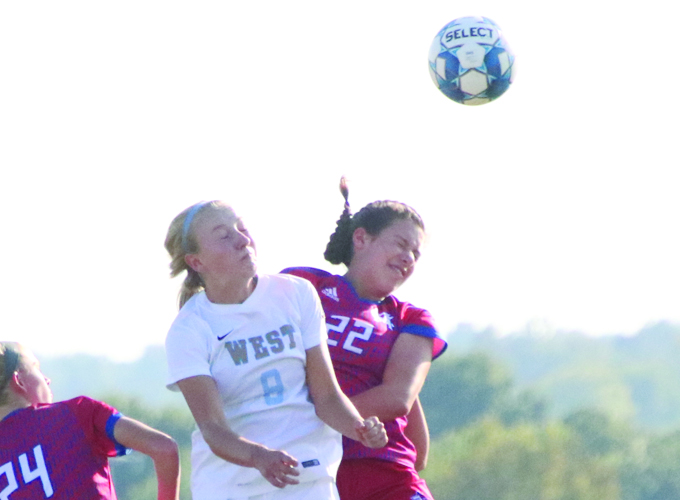 The first matchup between the Mercer County Lady Titans (5-3) and the West Jessamine Colts (9-3) didn’t go so well for the former.

Since then, the Lady Titans have won five of six games, while the Colts have won seven of nine.

In their most recent matchup on Monday, Sept. 9, the Colts won a hard-fought 3-0 matchup to earn the regular season sweep against the Lady Titans.

Mercer County made a few changes to their lineup, sending primary midfielder Bella Garrett, back on the defensive line.

“Sports are similar to the game of chess. You have to put your pieces where you think you can have the best opportunity to win. I felt like having Bella (Garrett) back there with Abby (Steele) and Suly (Smith), it gave us an opportunity to slow them down.”

The senior Steele and sophomore Smith both played some great defense on the back line with Garrett, said Culver.

“You have to stop the ball before you can get some offense, obviously,” said Culver. “You have to have the defense, win the ball and then attack.”

The back line along with freshman goalie Ryleigh Sipe  anchored the Lady Titans defense to a shutout in the first half against a team that averages three goals per game, and Head Coach Josh Culver was proud of the way his team came out and competed.

“I learned that when we stay disciplined and everybody is doing their job as a team member, we can come away with a 0-0 halftime score,” he said. “Obviously we didn’t have the most offensive opportunities in the first half, but we did in the second half. We had a couple shots and I told the ladies  that if we can put some on frame and put some in, we might have an even game here at some point. Last time we played them it was 3-0 at half and I told our girls that just shows how much they have improved since then.”

Mackenzie Tucker (48’), Audrey Henry (55’) and Caroline Absher (72’) scored one goal each in the second half to secure the win for West.

The Lady Titans will be back on the pitch today, Thursday, Sept. 12, when they travel to take on East Jessamine at 7:30 p.m. 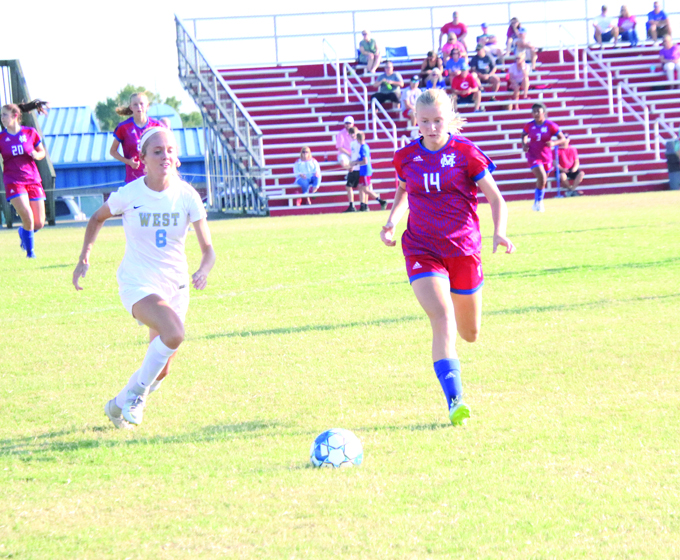 Mercer County freshman goalie Ryleigh Sipe gets a save and finds an open teammate on the right side against West Jessamine on Monday, Sept. 9. 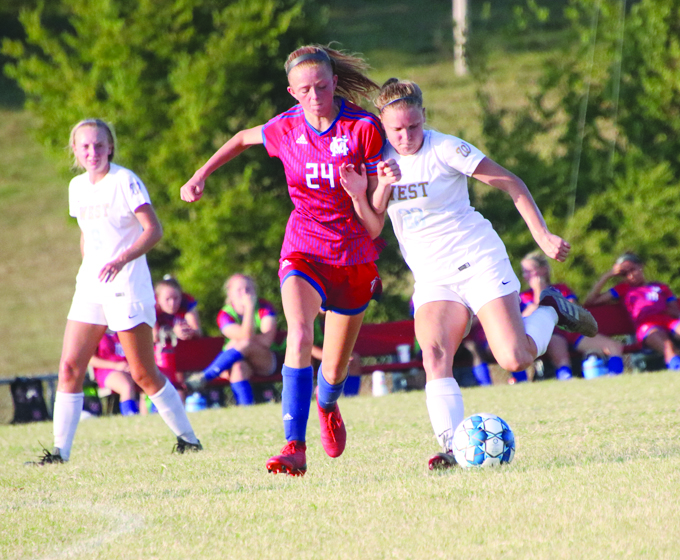 Mercer County junior Abby Dean (24) fights with West Jessamine’s Mackenzie Tucker for possession in the middle of the field on Monday, Sept. 9.