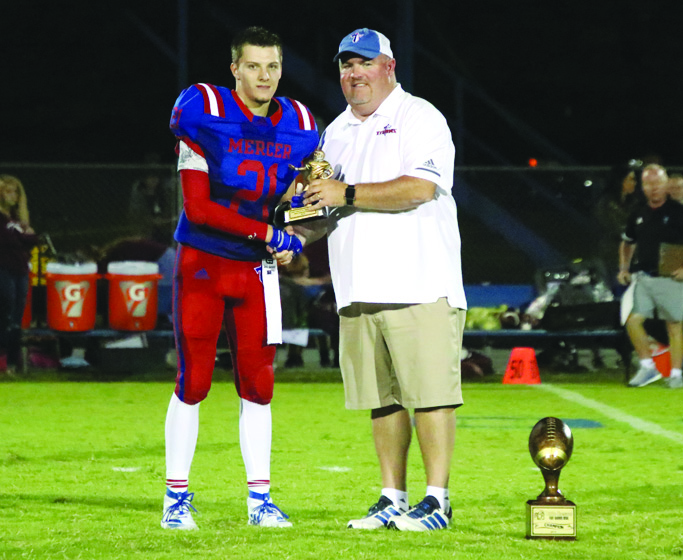 Offense sells tickets, defense wins games. That was certainly the case in the season opening matchup between the Mercer County Titans (1-0) and the West Carter Comets (0-1) in the Little Caesar’s Ft. Harrod Bowl on Saturday, Aug. 24, in which the Titans won by a final score of 21-0.

Senior defensive back and wide receiver Dillon Warren earned Little Caesar’s Ft. Harrod Bowl MVP after taking an interception back for a touchdown and leading the Titans in receiving with 42 yards.

Head Coach David Buchanan talked about his defense, who held the Comets to a total of 192 yards.

“I was really pleased with our defense. I thought we played a good game on that side of the ball,” he said. “I would still like to clean up some things but we did a good job tonight.”

Buchanan also talked about what he would like to see differently on the offensive side.

“I would have liked to be a little cleaner on the offensive end as well and limit our penalties,” he said. “But their (West Carter) front linebackers did a really good job and gave us fits all night.”

After a scoreless first quarter, the Titans opened the second quarter inside the 10-yard line, which ended with a four-yard touchdown run by senior Malachi Yulee. The senior had a team-high 104 rushing yards. The Titans out-rushed the Comets 215 to 55.

“Daniel (Barker) is just doing a tremendous job at West Carter. They played their butts off and he had a really good game plan on both sides of the ball,” he said. “I think you can see that’s a program on a rise. I’m very proud of him.”

Mercer County held a 6-0 lead early in the second quarter after a blocked extra point. Both teams struggled to put the ball in the end zone the rest of the half and the Titans took a 6-0 lead into the locker room. The Titans forced a turnover on downs with two seconds left in the half inside the five-yard line, but were not able to score.

After a scoreless quarter coming out of the half, the Titans held onto a six-point lead heading into the fourth quarter.

After a turnover on downs for the Titans, West Carter took over at their 25-yard line. Not much came of the drive after senior Dillon Warren picked off Comet quarterback Orry Perry and took it to the house to put the Titans up 14-0 after a converted two-point conversion. Warren’s return was 40 yards.

After forcing another punt, Mercer County took over at their 45-yard line.

The second longest play of the day for the Titans was to sophomore Brayden Dunn for  35 yards from senior quarterback Kaelin Drakeford. The signal caller was 3-for-10 with 89 yards and one interception. He also had 24 yards rushing.

“I think he (Drakeford) did some good things tonight. I would like to see a cleaner game. I was really glad that he hit that pass to Brayden (Dunn) at the end because we missed some early and I know that bugged him,” said Buchanan. “Kaelin is a winner. He played both sides most of the night. He did a really good job for us and once again, he bailed us out. Sometimes when things aren’t going well, he can bail us out and he did that again tonight.”

Dunn caught the pass at the one-yard line and ran it in for a score a play later to give the Titans a 21-0 lead with only a few minutes left. Dunn finished the game with 30 rushing yards. Sophomore Jackson Peavler had 22 rushing yards, senior Peyton Owens had 20 and junior Bryson Yeast finished with 12.

As any coach would be, Buchanan is happy to start the season 1-0.

“We’ve got an expression around here called ‘Sunday Morning Vomit’, said Buchanan. “We’ve had that three of the last four first games and it’s been really tough to take. I’m just really glad we’ll be able to get up in the morning with a win.”

Sophomore Brent McKitric led the Titans in tackling with nine.

The Titans will be back on the field this Saturday, Aug. 31, when they take on Allen County-Scottsville in the Rebel Bowl, at Boyle County High School. 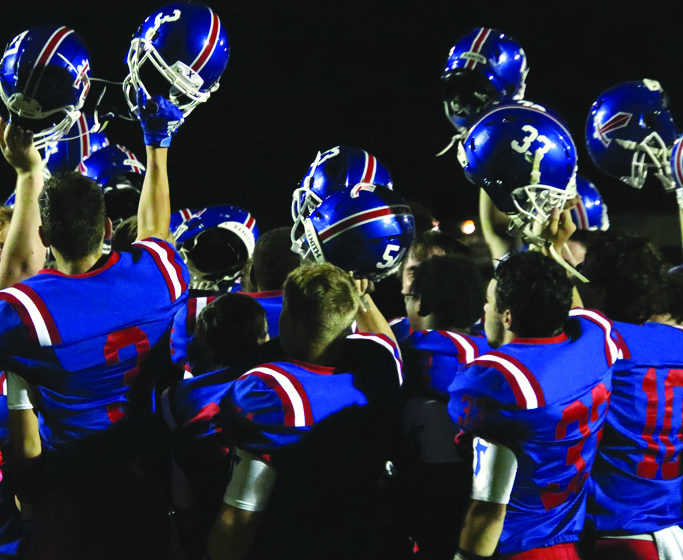 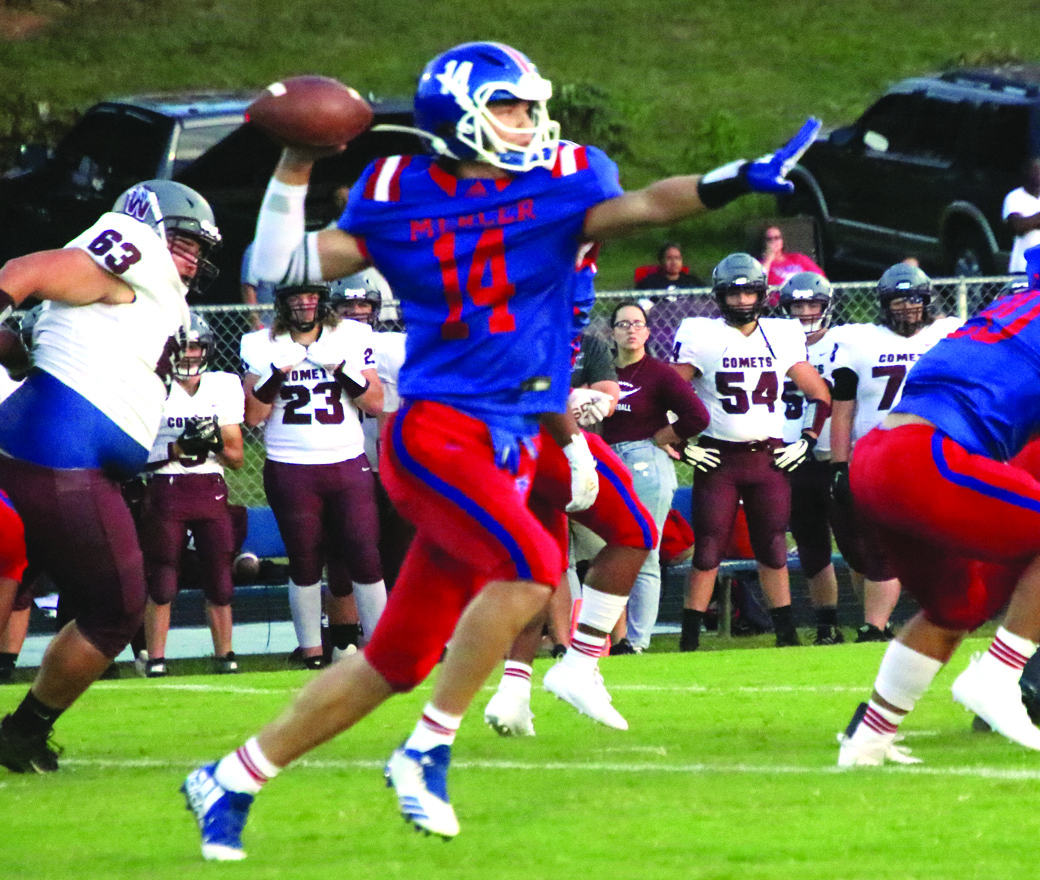 Mercer County senior quarterback Kaelin Drakeford (14) rolls out to the right and looks for an open receiver against West Carter on Saturday, Aug. 24, in the Little Caesar’s Ft. Harrod Bowl. 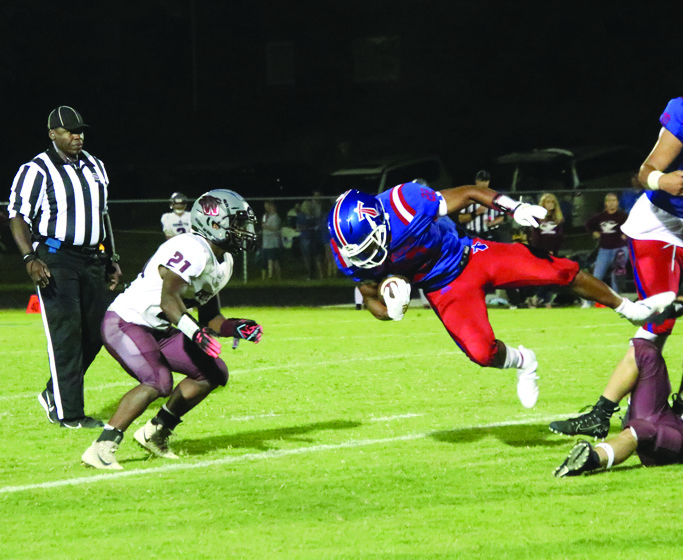 Mercer County senior Malachi Yulee leaps for the first down against West Carter on Saturday, Aug. 24. Yulee had one rushing touchdown in the Titans’ win. 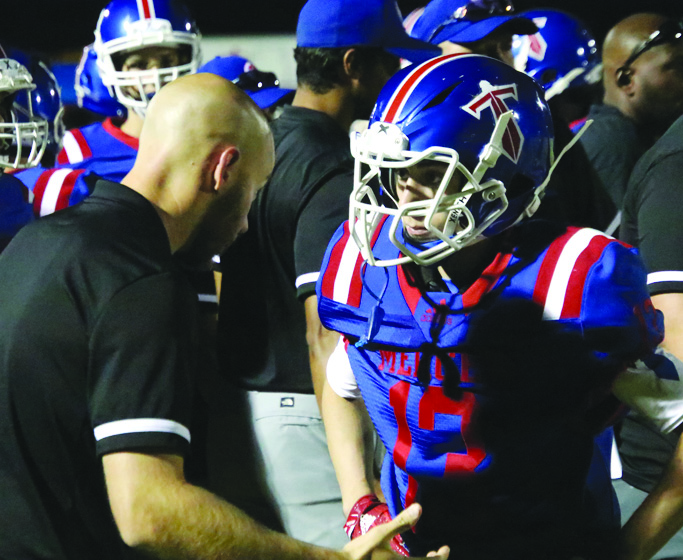 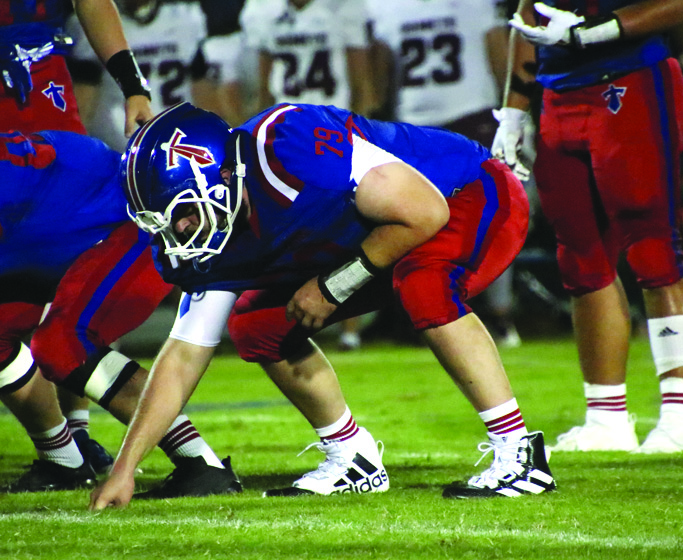