Culver: “I feel like everybody is accepting their role within the team early on in the preseason.” 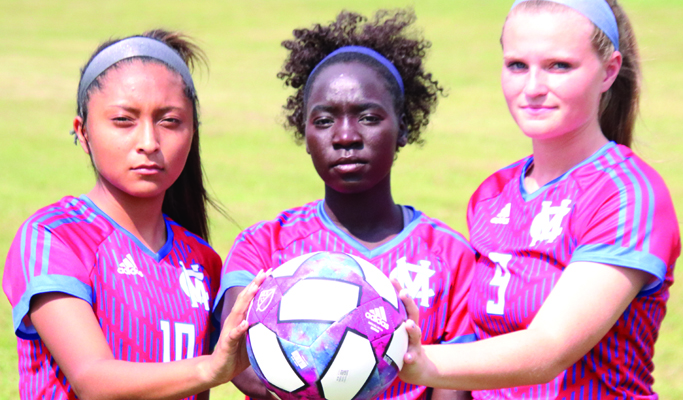 After reaching the 12th Region championship game in 2017, the Lady Titans fell in the district tournament in overtime to East Jessamine a year later, and are looking to make another run at the region title in 2019.

The Lady Titans attended a team camp at Western Kentucky University back in mid-July and Head Coach Josh Culver said he was impressed with how the girls developed team chemistry and gave his early impressions of his 2019 squad.

“It’s almost like they didn’t skip a beat from last year,” he said. “I think it’s built from last year pretty nicely. I feel like everybody is accepting their role within the team and that has really helped us early on.”

Culver said the preseason for the Lady Titans went really well. They participated in the A bracket of the Bluegrass State Games in late-July and participated in preseason matches against Newport Central Catholic, Eastern and Henderson County.

“I thought we did very well with the competition we played against,” said Culver. “The girls were also happy to see the level of competition as well. Overall, I think the girls are really looking forward to the season.”

Listed below is the full roster for Mercer County separated by grade.

“Practices need to simulate game play. Obviously you don’t want to go so hard where you’re hurting yourself in practice,” said Culver. “But your practices have to simulate your game play because if it doesn’t, then you’re setting yourself up for failure. We’re trying to get high quality practices in so we can perform at a high level when the games start to matter. When it comes game time, they know right off the bat they have to be focused from the first whistle. It doesn’t matter who our opponent is, we have to play at a high level during the course of the game. We’ve really talked about that our team has started to do it. I’m looking forward to it and the girls have done an excellent job so far. I’m just really looking forward to it. It’s going to be a great year.”

“We’ve already had a lot of girls stepping up this season into leadership roles despite their grade,” said Culver. “As a team, they have already looked to the other ones to lead and Abby (Steele) does a phenomenal job and has really stepped up so far this year. Some of our juniors like Bella (Garrett), Abby (Dean), Maddie (Angel), Marlie and some other younger players have been very vocal and have really helped out each other in the preseason.”

Culver said all those girls he named have had a very good sense of communication on the field, something you need to excel at in this sport.

“We won’t necessarily have primary strikers, but they will be heavily involved in the offense. Those three girls’ roles are a little bit different than your typical striker,” said Culver. “However, they do have the ability to go up field and put the ball in the net. They  create a lot of opportunities off their spacing, movements and passes. Overall, we’ve had a lot of different scorers in our preseason matches. I’ve really emphasized to all of them that everybody has to be willing to shoot, everybody has to be willing to score. Even the defense, and our team has bought into that.”

Culver expects there to be a lot more scorers this season than in previous years past.

Abby Steele and returning sophomore Suly Smith will be the anchors in the back line for the Lady Titans.

“They both have a lot of speed and anticipate the ball very well,” said Culver.

Steele and Smith will get plenty of help in the back line.

Culver said the beauty of this year’s roster is the versatility.

“I think that’s something great as far as rotations go,” he said. “We’ve got so many players we can put in different spots so if we need them to step up and play a different position than normal, they can step right in and go with it.”

Culver said Dean, Angel and Garrett have developed a lot of chemistry together playing on the same club team for the last few offseasons. They are expected to lead the midfield and get other players in positions to put the ball into the net.

“They just have great chemistry together and they are probably going to take up the midfield even though they can play other positions. They are already feeding off one another and all I’m trying to do is guide them in the right direction. They are already doing it, so it’s just trying to get them to understand the game more and when to make the right decisions.”

The Lady Titans have a few new faces in goal this season. Both freshmen, Riley Johnson and Ryleigh Sipe, are expected to battle it out for the starting spot.

“We’re young, but talented. They are both learning the speed of the high school game and making smart decisions out there,” said Culver. “Both are very talented and are really good at reading the game and making adjustments.”

Sipe, Johnson and Lillie Travillian are new to the high school squad, but came up through the middle school program.

“They already know expectations and how to play the system that we play,” said Culver. “The biggest difference for them is just adjusting to the speed of the high school game. It’s faster, quicker and you have to make decisions more on the fly. They all have done a great job of that and have adjusted really well.”

Erin Darland, Emma Kiernan, Hailey Lawson and Love Mays are also expected to put in a lot of varsity minutes. All three have the experience from past seasons to be comfortable out on the field.

“Like I said, we just have a lot of different girls we can put out there. A lot of the younger ones have seen varsity time and know what to expect out there when the games count,” said Culver.