Stewart: “The mental part of the game is what we are focused on early in the season.” 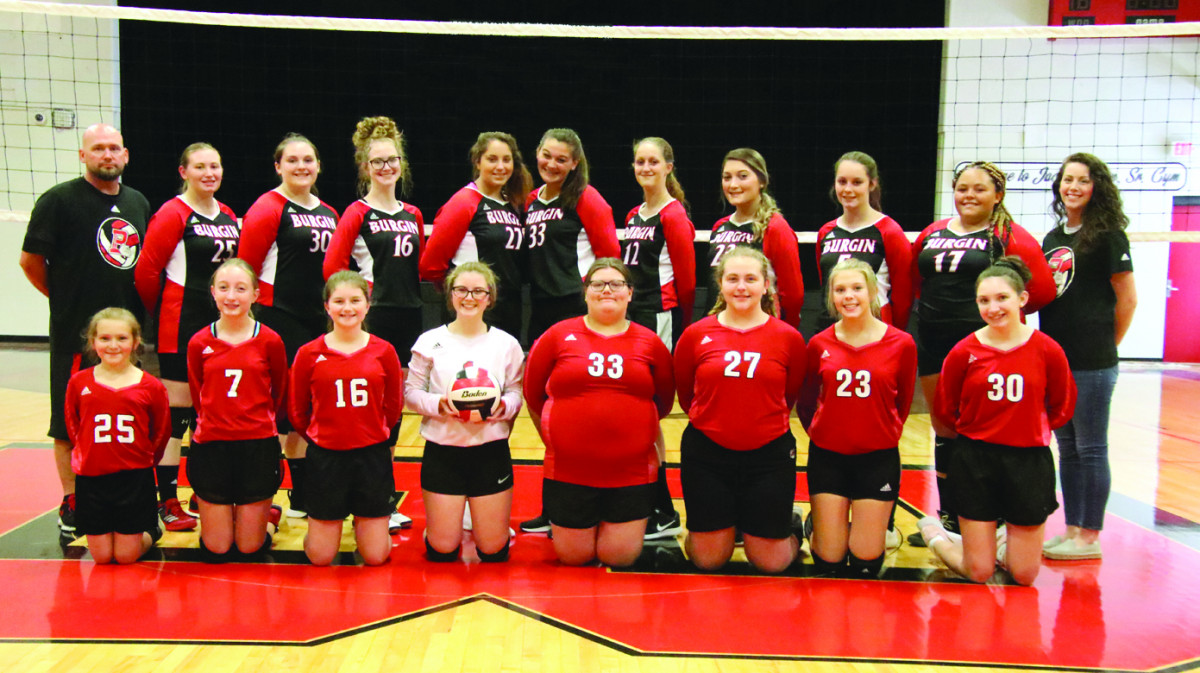 Burgin volleyball is one of two fall sports at Burgin Independent once the school year starts, and once the nets go up, Bulldog faithful rejoices in excitement.

Head Coach Rick Stewart, who is in his second season coaching Burgin volleyball, talked about what he learned about himself in his first year head coaching a team and what he plans on doing differently after going 1-20 in 2018.

“We’re trying to bring in some new people. We’re really trying to make them understand it’s not a one-day process,” said Stewart.

Burgin doesn’t have many upperclassmen, but they return a senior with postseason experience.

Julia Arnett is someone Stewart is going to rely on to lead the younger group and show them what it takes to compete at the varsity level, having competed in the 46th District Tournament last fall against West Jessamine.

“The one thing that stands out the most is that even being a senior, she came to me and said that she is setting goals for herself and the team,” said Stewart. “There were things that she wanted to accomplish individually and as a team in her senior year.”

Listed below is the full roster for Burgin volleyball separated by grade.

Burgin’s  younger players  are still all about learning the fundamentals and understanding of the game, according to Coach Stewart.

“There is not really a fire there yet. Raegan (Day) just recently earned her varsity jersey and has been aggressive in practice. One of the biggest things we tried to implement in her is her communication on the court. You can’t play this sport if you can’t communicate,” said Stewart. “For Ashley (Stewart) and Kacey (McCray) and Sammi (Martin), we are working on confidence.”

Stewart said he has a lot of young, strong and physical players that will get to experience varsity volleyball, some for the first time.

Arnett and Burke are two of the strongest returning members on the team. Stewart hopes that the younger players can learn from them and how they hold themselves accountable within the team.

“They are two very strong players and we hope to get the best out of them this season,” said Stewart. “If we are going to be successful, those two are going to have to be a big reason why.”

Yates and Simpson are the tallest on the team and are expected to be the primary blockers for Burgin.

“This year, we are focusing a lot on the mental part of the game. Brynn (Simpson) and Brittany (Yates) understand and communicate really well. The biggest thing for them is that they are both really antsy,” said Stewart. “They both want to do so well for their team that sometimes they have to remember where they are on the court. Other than that, they are progressing really well.”

Kaylee McCray will be the labero for Burgin.

“We just want Kaylee (McCray) to understand everything out there, being the labero. She has arguably the most challenging position mentally,” said Stewart. “She has done really well so far in practice and I’m excited to see what she can do out there on the court.”

Heidi Foutch, who transferred in from the Chicago area, is expected to make a big impact in her first season in a Burgin uniform.

“She’s looked good in practice and I can’t wait to see the impact she will have on our team this year,” said Stewart.

In his second season, Stewart expects his team to perform and is looking forward to seeing how the fall season plays out.

“This year, it goes back to  what I said about the mental part of the game. Last year, we revamped the program and we worked on fundamentals. Now with a year under our belt, we are focusing on staying focused and not getting too down on ourselves when we don’t win points” said Stewart. “Now it’s taking the physical part of the game our team learned last year and putting it together with the mental part. I really want them to understand where they are on the floor and to communicate to the best of their ability. We have to know all the positions out there and what their responsibility is on the floor or we won’t get anything accomplished. Volleyball is a game where there is so much thinking going on while you’re playing and so I want them to understand every aspect of the game rather than just going out there and hitting.”

Before playing Berea for their first match of the season on Tuesday, Aug. 20, Stewart said he would like to see some more improvements heading into that first match.

“I would say rotating out of our offense into our defense. I notice a lot of girls just standing around and watching the ball instead of getting to their spots. It’s very important we clean that up heading into the Berea match,” said Stewart. “That’s where the communication part of the game comes in. We have to communicate with each other on every point and every rally.”

The Bulldogs will take on Berea at 6 p.m. for their home opener.

“We’re excited and ready for the season to start,” said Stewart.