Anderson: “Making it back to state is our goal.” 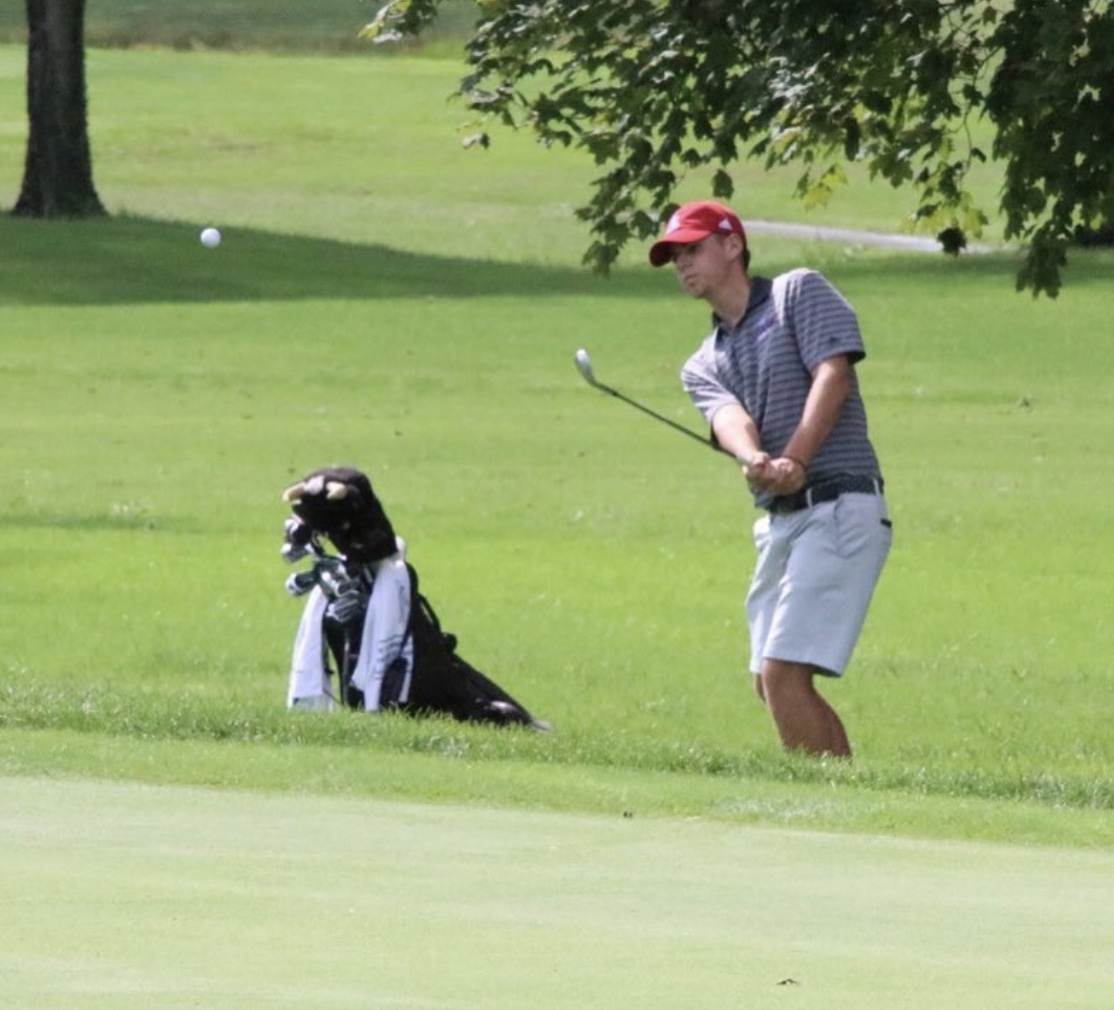 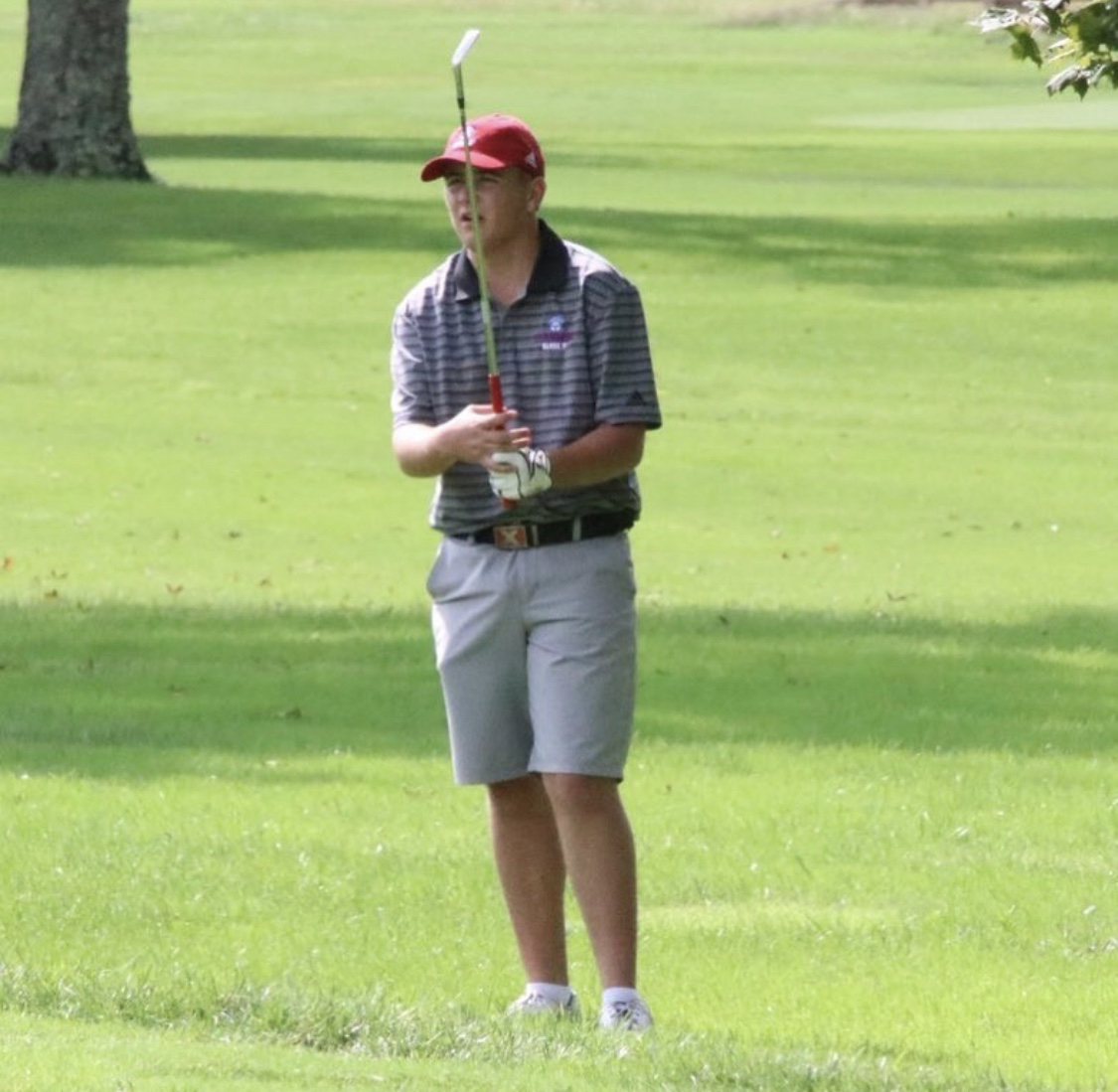 Junior Logan Thompson is vying to join Gritton at this year’s state tournament. Thompson is pictured above competing at the region tournament last season at Danville Country Club. (photo by Arpan Dixit)

Mercer County golf Head Coach Jay Anderson is ready for the 2019 season, his 18th with the program.

His top two golfers from last season, Reed Grittion and Logan Thompson, return as Mercer County’s 1-2 punch for the Fall of 2019.

Gritton, a senior, and Thompson a junior, are expected to show the younger guys the ropes and what it takes to compete at a high level.

“I definitely think making it back to state is the main goal for these guys. They are going to anchor our team. We have a lot of youth and inexperience on the back end so I’m going to count on them to just be a calming solidifying force,” said Anderson. “They’ve both worked really hard in the offseason on their games and really for both, it’s just a matter of confidence in peaking at the right time. For these two guys, it’s more about the mental side of the game and just trying to get better with that each and every time we practice. They have the skill set to be exceptional high school golfers.”

Listed below is the Titan Golf schedule separated by date, event and site:

After Gritton and Thompson, Anderson expects his younger guys to compete for the rest of the spots.

Anderson said junior John Whited has made strides this offseason.

Sophomore Matthew Mays is another name Anderson said would battle for varsity time.

Levi Cheek and Regon Southworth, who are both eighth graders, are two players Anderson is really excited about heading into the future.

“They are both just golf junkies. They love the sport so they are always out playing or at the range working on their game,” he said. “There is a lot of potential in those two young men. For them, it’ll be more about looking long term. They’re going to have some bumps in the road, but it’s just getting them to see that we’re laying the ground work for them to be Reed (Gritton) and Logan (Thompson) three or four years from now.”

Anderson said his players are perfect role models for younger golfers on and off the course. With two kids of his own, Anderson knows how important it is having players represent the program to the best of their ability.

“More importantly, I want our older guys to show these young kids how we conduct ourselves outside of the golf course. They represent all the tradition that’s embedded in our program,” he said. “They’re exceptional students and even better young men. If my two young boys grow up to be like Reed and Logan, then I feel like I’ve done a pretty good job as a parent.”

Anderson talked about the changes he’s seen in himself over the course of 18 years coaching Mercer boy’s golf.

“I’m probably a little more mellow than I used to be,” said Anderson with a smile. “Any time a young coach comes in, they want perfection. Just looking back, I thought to myself, what was I thinking? I had some of my best teams when I was a young coach. A lot of what I do now is a direct reflection of the 12 years I spent with Coach Williams.”

Phil Williams, who passed away in July of 2018, leaves behind a legacy that Anderson and his players won’t soon forget.

“Phil was definitely the calming force that I needed when I was younger. We very much complimented each other as coaches,” said Anderson. “He was exactly what I needed.”

Gritton said he and Thompson are ready to lead this group the way Williams would’ve wanted them to.

“Logan and I will try to be the best role models we can for the younger guys. We know how Coach likes to run things and we will keep things the way they are,” said Gritton. “Logan and I also know how Coach Phil likes to do things and the way he wanted us to practice. They younger kids didn’t get to experience Coach Phil, so we try to ingrain that same passion he had for the game into them.”

Titan golf opened up a new facility in honor of Williams last season.

“When we’re at our facility, you can’t help but think about him,” said Anderson. “You just know he’s there. A lot of our talk centers around how badly we wish he was here so he could enjoy the new facility. I call that facility his Augusta National so to speak. That was his dream to get that done.”

The players on the team coached by Williams always recall fond memories of the late coach.

“They miss him. There are a lot of things that we continue to do that he did like mannerisms and sayings. Our practice routine hasn’t changed since he’s been gone,” said Anderson. “We function as though he’s there. It motivates our guys because they want to do well for Phil, their family and the program.”

Anderson said the facility has been a huge success and opening it last season was one of the best moments in Titan golf history.

“It’s still very much a work in progress. We are continuing to add to it,” he said. “It wouldn’t be possible without the support of the community and the donations we’ve received.”

Anderson said the goal now is to add a swing analysis simulator so the team can work on in the winter as well as a target green.

“We want to create that family atmosphere to embody what our program is all about,” said Anderson.

Mercer County’s next tournament will be at the Hawks Classic at the My Old Kentucky Home Golf Course, in Bardstown, on Saturday, Aug. 10.

Every year is different, and that comes with new expectations every year that a coach has to adjust to.

“For this bunch, the main goal is to just get better every day. Our realistic expectation is to send our top two guys to state,” said Anderson. “That’s not happened in a long time.”