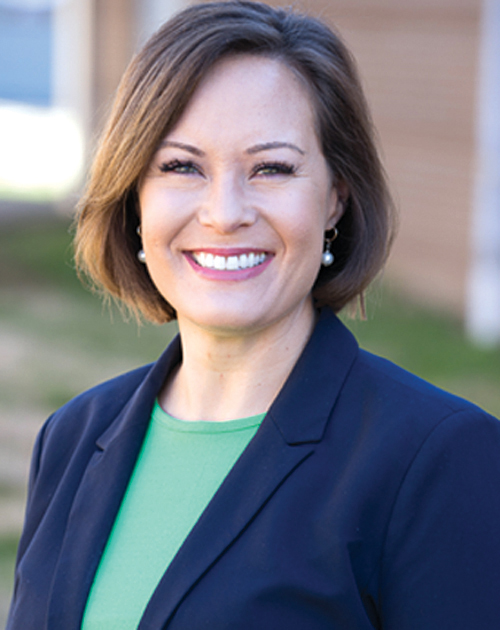 Jacqueline Coleman, who is running for lieutenant governor, said public service is a tradition in her family. “I come from a long line of public servants,” said Coleman. “We each find our own way to give back to the community.”

Jacqueline Coleman is a fifth generation native Mercer Countian who has dedicated her professional life to education as a teacher and as a basketball coach.

“I come from a long line of public servants,” said Coleman. “We each find our own way to give back to the community.”

Coleman’s father, Jack Coleman, was a state representative in the 55th District from 1991 to 2004. He has also served as a Harrodsburg city commissioner since 2012.

Her grandfather, Jack Coleman Sr., played basketball at the University of Louisville and then played nine seasons in the NBA (1949-58) with the Rochester Royals. The gym at Burgin Independent School is named after him.

Coleman started her path in public service in education after playing basketball for Centre College and began her career with Burgin Independent Schools as social studies teacher and girls basketball coach. While at East Jessamine County Schools, she was named Coach of the Year for Region 12 in 2015 by the Kentucky Association of Basketball Coaches.

Coleman moved onto become an administrator at Nelson County Schools before taking a hiatus to run for lieutenant governor on the Democratic ticket with Kentucky gubernatorial candidate and current attorney general, Andy Beshear.

“We are at a crossroads in this Commonwealth. This is a golden opportunity for someone with an education background to help the next generation in our classrooms today reach their potential,” said Coleman. “I am grateful that Andy Beshear recognized the need for an educational background. Kentucky hasn’t had an active educator in the office of lieutenant governor since Martha Layne Collins.”

Coleman said education is critical and making educators feel valued in their positions is important.

“So much positive change is happening in education, preparing the next generation for post secondary life includes training for jobs that don’t even exist yet. Teaching requires vision and innovation,” said Coleman. “I love the shift that education is making and I think Mercer County is a great example of a rural community bridging the gap between education and economic development.”

Coleman’s love of mentoring led to the creation of the non-profit “Lead Kentucky” organization five years ago.

“Lead Kentucky recruits the best and the brightest college women in the Bluegrass and empowers them to become our Commonwealth’s next generation of leaders,” said Coleman. “It is not a political program, it is a leadership program for Kentucky’s college women, regardless of their desired career path.”

Lead Kentucky helps prepare, encourage and empowered women to seek leadership roles on campus and in the real world. Since its founding, Lead Kentucky has helped over 50 campus ambassadors on over 16 campuses with 29 different majors.

Moving back to Mercer County in 2015, Coleman said she enjoys her hometown’s history.

“I found a historical home that I loved here in my hometown,” said Coleman. “We decided to move back to be closer to my family.”

Coleman expects her hometown roots to play a role as lieutenant governor.

“Growing up in Mercer County, I was very fortunate to be raised with small town community values,” said Coleman. “My affection for rural communities and small towns will guide my time as lieutenant governor.”

Coleman’s goal is to create a world-class public education system here in Kentucky to help produce the future leaders of the commonwealth. She said she understands many challenges facing rural Kentucky and is determined to give a voice to Kentuckians who feel shut out.