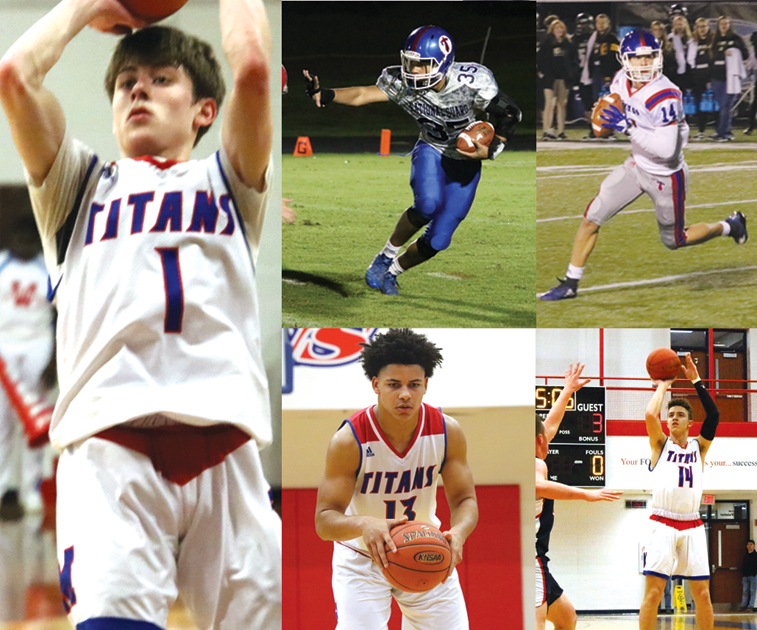 Jamisen Lewis, Kaelin Drakeford and Bryce Yeast will provide leadership on the football field and basketball court this season for the Mercer County Senior High Titans.

Three Mercer County High School seniors are expecting to do great things on the football field this fall and the basketball court this winter. Kaelin Drakeford, Jamisen Lewis and Bryce Yeast excel at basketball and football and plan to make their final season their best yet.

Drakeford has lived in Harrodsburg his whole life and can’t remember a time when he didn’t play basketball. He will be expected to lead the Titans on the field as well as the court this upcoming season.

Drakeford recently received his first division one football offer from The College of William and Mary, and he has the option to pursue a college basketball career as well. Whether he is intercepting passes or throwing touchdowns.

Drakeford’s athleticism is starting to be recognized on the collegiate level. Drakeford expects success in both sports and he knows just how important his teammates are to accomplishing the team goals and growing as an athlete.

“My relationship with Jamie and Bryce has been unique because of how they both transferred in during high school. We have become closer and better friends through sports, and we’ve pushed each other to become better athletes,” said Drakeford.

Lewis has proven himself as an athlete but has often been plagued by injury. He joined the football team before his junior season and only stepped foot on the field once. He was injured in a scrimmage against Dunbar High School and was ruled out for the season. Despite this, Lewis plans to make an immediate impact on the team and translate the electrifying quickness he uses on the court onto the football field.

He also will be one of the Titan basketball team’s key players this winter. Lewis has always loved both sports.

“I’m very excited for football season. It was hard last year working out all summer and then getting hurt in the first scrimmage and having to miss all year. I wanted to show people what I could do on the field. I’ve always loved football, “ said Lewis. “I’ve loved basketball from the start and have played since I was very young. I expect a lot out of myself this year, coming back as a leader and one of the more experienced players. It’s going to be fun and I’m looking forward to it.”

Yeast moved to Harrodsburg before his sophomore season began, and is now known as one of the strongest kids on the team. He uses his strength to fight for rebounds and make post plays on the court, but on the field, he is much more physical.

Yeast was a starting inside linebacker and running back for the Titans last season. He believes his love for the game of football pushes him to be a better basketball player.

“I love the game of football because it teaches you more than just the fundamentals of the game. It teaches you life lessons that you’ll use for the rest of your life,” said Yeast.

“Any time you are competing, it makes you better. Those guys are better in football because they play basketball and vice versa. All three will have big senior seasons,” said Buchanan

These three athletes love to compete, and their competition is fueled by each other. “We are always competing and we make each other better in both sports. I’m lucky to have them both to play with. They’re phenomenal athletes and both put the team first,” said Lewis.