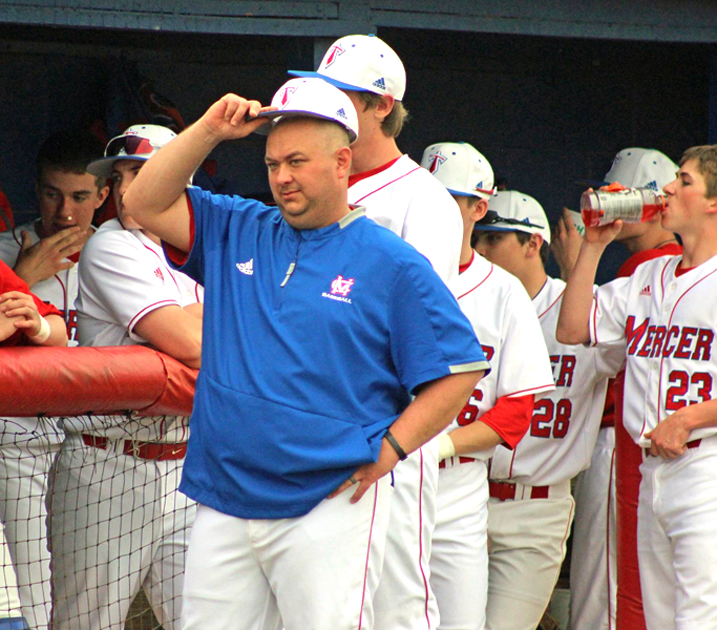 The Harrodsburg Herald/Arpan Dixit
Mercer Head Baseball Coach Adam Shartzer has stepped down to focus on his family.

For the past three years, Mercer County Senior High Schools baseball program was coordinated by head coach Adam Shartzer, but no longer.

After three successful seasons as the leader of Titan baseball Shartzer plans to step down from his position and hand over the reins of the program to a new leader.

When Shartzer took over the program in 2016, the Titans were coming off of a 15-16 record in the previous season and were looking to replace long-time baseball coach Jeremy Shope. Shope was known for his state runner-up teams in 2011 and 2013, as well as several regional championships.

Shartzer was an assistant coach under Shope and took advantage of the opportunity given by his departure. Since then the Titans have achieved a 48-39 record as well as a district championship and regional semifinal appearance this past season.

This season was the most successful under Shartzer. The Titans finished with a 19-12 record, their first district title since 2011 and a trip to the regional semifinals, where they lost a tight game to the Danville Admirals.

Ultimately, Shartzer decided that being the head baseball coach at Mercer  conflicted with his values as a parent and husband. Certainly, he knows the dedication and time needed to develop and maintain a successful baseball program, and he believes it may be too heavy a price to pay as a father of two daughters.

Shartzer believes spending time with his family is important. He is expecting a third daughter in November and knows that it would be unfair to his family, and unfair to the Titan baseball program to split his wholehearted effort in two.

Shartzer will remain a resource teacher at Mercer and says if an assistant or consultative position became available and included acceptable conditions to still spend time with his family, he may consider taking it.

“I love the district and the kids. If the right position became available, it might be something worth considering, “ said Shartzer. “I don’t want to look back when I’m older and have any regrets. My wife and family have been so supportive of me and my dreams of becoming a head coach. It is now time that I get to support and encourage them into following through with their goals.”