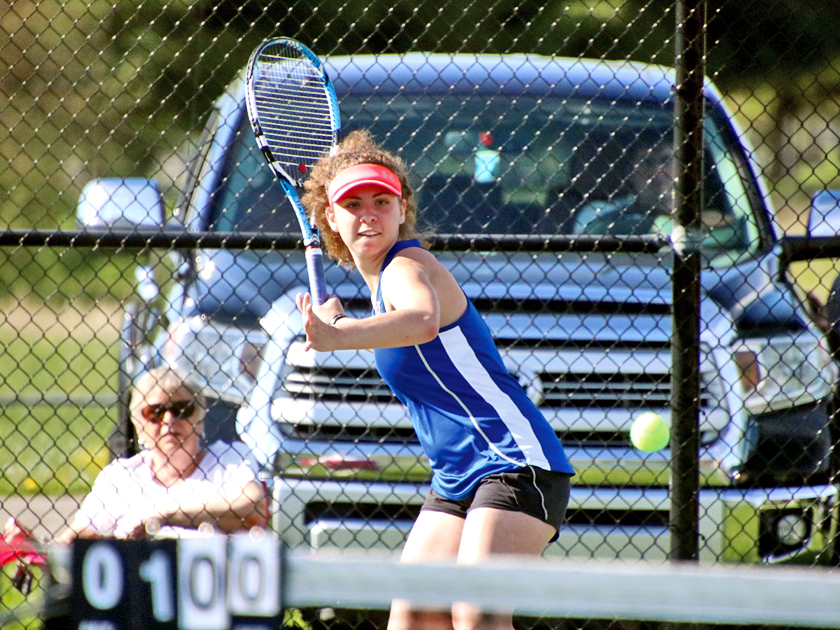 Rebekah Trent, who will be a junior in the 2020 tennis season, looks to maintain her success in region play in her last two years of eligibility.

Winning the 12th Region singles title in consecutive years is quite the accomplishment, but for Rebekah Trent, there is still work to be done.

Trent, who will be a junior in 2020, has already compiled a record of 34-3 in her first two years of high school and a 23-1 regular season record.

“Winning region both my freshman and sophomore years is a very gratifying feeling. The first year was exciting because of how close it was,” she said.

“The second year was honestly a relief to win. With the added pressure of being a returning champ, along with having the one seed, winning felt like it was a priority,” said Trent. “Overall, the feeling is a really great one and I hope to continue that feeling for the next two years.”

“The biggest objective that I’ll be working on during this summer would be my mental strength,” she said. “I feel that there is a large amount of pressure and stress that can come with playing competitive tennis, and that is the reason why I would like to improve my ability to stay mentally tough in these difficult situations.”

Playing in tournaments in the offseason was always the plan, and Trent will look to take her game outside of the state to Tennessee and Georgia.

“To better myself, I’ll be playing more tournaments outside of school to become more accustomed to the pressure that different situations in a match might present,” she said. “By playing these tournaments, I could change my mindset from being one where I play not to lose, rather than play to win.”

“His coaching has helped me in a variety of ways, from simply changing something in one of my shots to helping me realize the capabilities that I possess. I know I would not be in the position that I am in right now without Danny and his constant support.”

Tennis wasn’t always on Trent’s agenda. It wasn’t until the matches started to count that she started gaining a competitive edge.

“My dad introduced me to tennis when I was four,” she said. “Most of the years I played when I was younger, I simply played for fun. Playing in tournaments over the summer in the past few years was when I started loving the competition.”

With a lot of tennis being an individual game, Trent said her Mercer County teammates are a big reason for her constant success on the court.

“When you’re on the tennis court, sometimes it can seem lonely and their cheering helps remind me that I’m not alone,” said Trent. “Having the team of amazing people I do makes me feel like I’m part of something bigger than just tennis. Almost like a really big, kind of dysfunctional family.”