The Mercer County Lady Titans track and field team are pictured with their first ever state championship trophy at the Class AA meet on Friday, May 31, at the University of Kentucky. (photo submitted)

In each of the last three state meets, the Mercer County Lady Titans track and field team have made history.

“I am so proud of how far this team has come in four years,” said Head Coach Terry Yeast. “Going from 12th, to sixth, to second and to state champion is absolutely amazing.”

“It feels good knowing that I’m right where I need to be as far as accomplishing my goals. Last year at state wasn’t my best showing, but I’m glad I was able to come back this year and let people know that I haven’t become complacent with the few things I’ve achieved,” she said. “Shot put is still a work in progress but discus seems to be coming along quite well.”

She also talked about being able to win a state championship.

“It’s liberating knowing I can count on my teammates to do what needs to be done and execute fully as far as their own events, because the time and effort that went into claiming the state title was truly crucial the past couple of weeks” she said. “We were all able to be held accountable to getting the points that we needed to get and be able to execute to the best of our abilities and knowing that we finally made it to the top is such a great feeling. But, we can never be too satisfied because there is more to come so we can never settle.”

Junior Jasmine Claunch claimed the state championship in triple jump (37 feet, 4 inches) and third in long jump (16 feet, 9.25 inches). She won both titles during her sophomore season, but has her eyes set for next year already.

“I really wanted to defend my title in both of the jumps this year but I ended up getting third in long jump. I was disappointed, but I knew I had to stay upbeat and positive for the triple jump because the team needed me to score 10 points,” said Claunch. “Going into next season, I’m just going to work hard and trust the process of it all. I’m going to control what I can control and not let what I can’t get to my performances.”

“It’s such a great feeling, especially since we made program history. I’m so blessed and thankful to be a part of such a great program with great teammates and coaches,” she said. “We all knew we were capable of winning the title, we just had to work hard and that’s exactly what we did all season. We did it for each other and especially for Marcus. I know he’s got the biggest smile on his face right now.”

Claunch is referring to senior track member Marcus Lewis, who tragically lost his life in an auto accident in the first week of May.

Coach Yeast talked about the impact Claunch and Yeast have had on the program, with both earning a combined seven individual state championships.

“These two young ladies have been huge for our team. Hard work will easily keep you consistently on top. Jasmine (Claunch) goes to the track each morning before practice to work on her flexibility. It had been an enormous benefit to her ability to flourish in the jumps,” he said. “Zoë (Yeast) hit a wall about midway through the year, but found a way to get back on track to pull out another title. I’m just so proud of them both.”

Heading into the final event of the meet, the Lady Titans knew they had claimed top prize for the first time in their school’s history, but they had to wait a day to lift the trophy. After a lengthy rain delay, the meet was postponed to Saturday morning, where the Lady Titans made even more history.

“Beginning the meet with the win in the 4×800 and ending the meet in the fashion we did in the 4×400 is one of the most memorable moments for me in coaching. Our 4×800 team was ranked second coming in. I knew adding Jai Maria (Piazza) to the mix would give us a chance to win. Clayra’s (Darnell) third leg was huge in that relay. I reminded the 4×400 team that a big win would solidify a great meet,” said Yeast. “They did an amazing job going 3:56. We were on cloud nine after that race.”

Photos by Arpan Dixit. More photos of the Class AA state meet will be in this week’s issue of the Harrodsburg Herald. 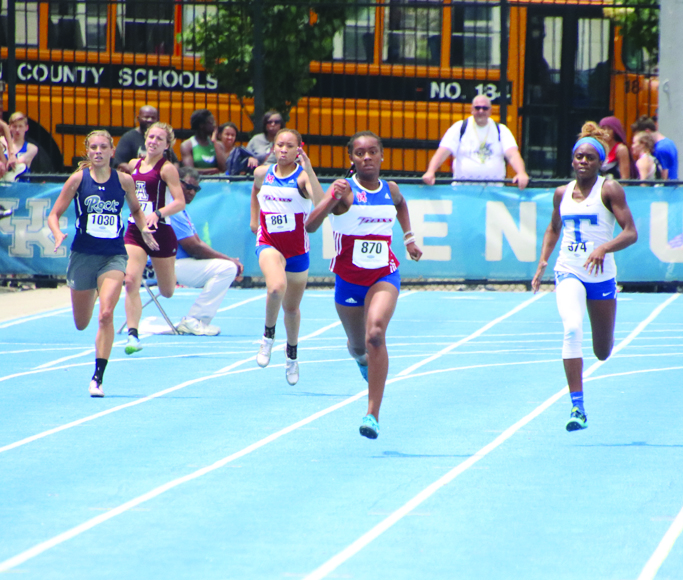 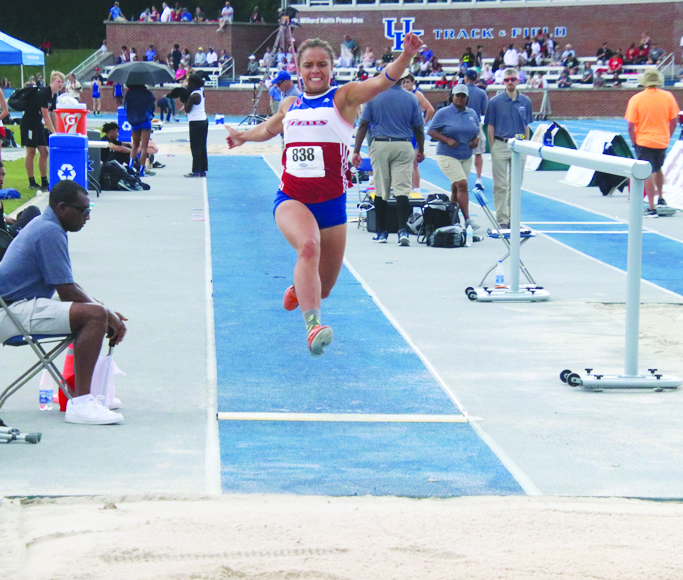 Junior Jasmine Claunch mid-air during the long jump at the Class AA state meet in Lexington on Friday, May 31. 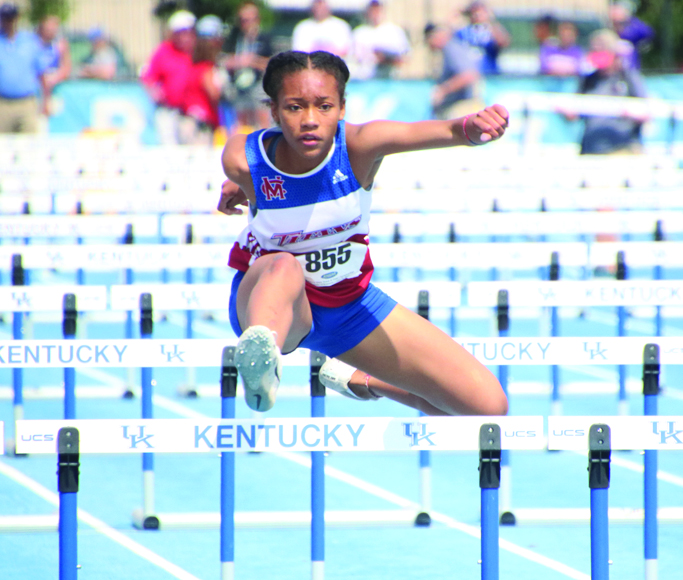 Freshman Love Mays jumps over a hurdle during the 100 meter hurdles at the Class AA state meet at the University of Kentucky on Friday, May 31. 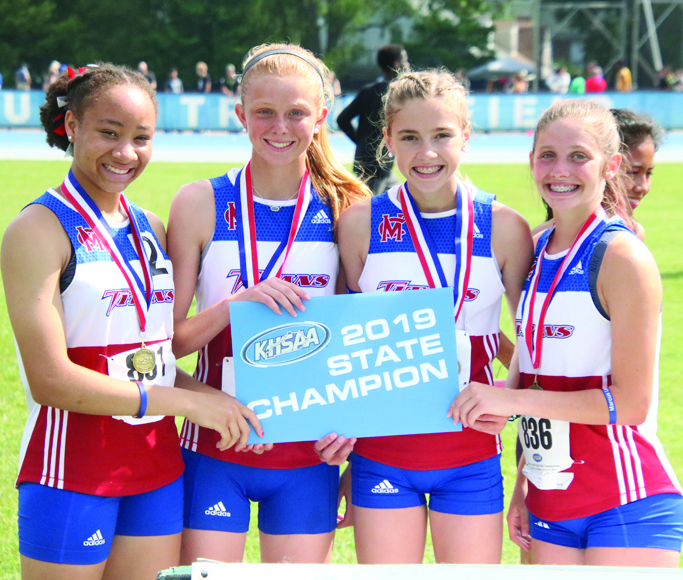 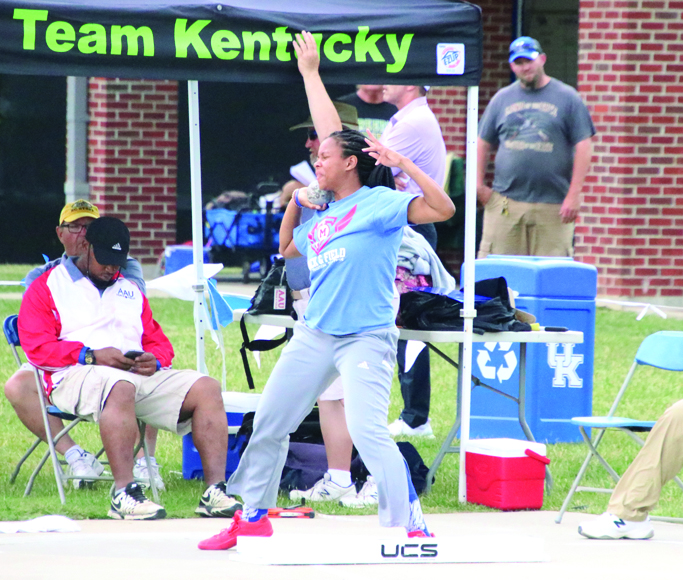 Junior Zoë Yeast warms up before her official throw during the shot put.