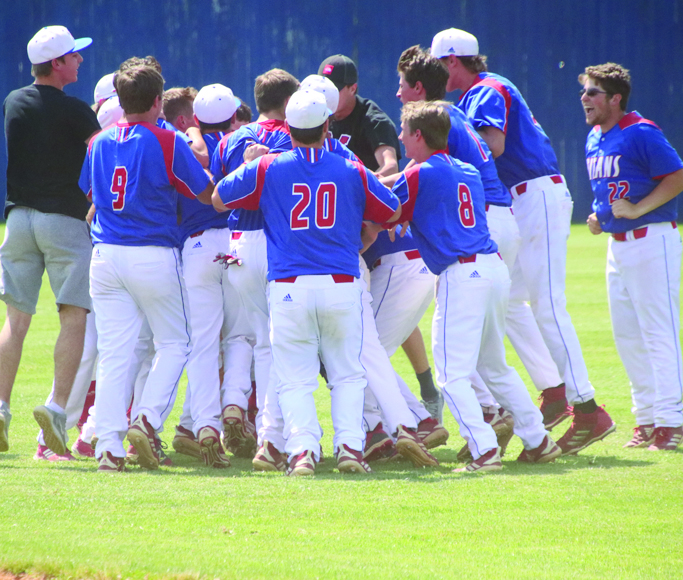 The Mercer County Titans swarm sophomore Sam Baughman after his walk-off hit against Wayne County in the first round of the 12th Region Tournament on Saturday, May 25. (photo by Arpan Dixit)

After a thrilling victory in the 46th District Tournament to capture their first district title in eight years, the Mercer County Titans baseball team set their sights on the 12th Region Tournament at Southwestern High School.

Mercer County’s first round matchup against the Wayne County Cardinals (18-14) was the game of the day. After trailing 5-0, the Titans fought their way back to win the game 6-5 on Saturday, May 25, after sophomore Sam Baughman’s walk-off single in the bottome of the seventh inning, scoring senior Nathan Tatum, who just beat the throw.

In Sunday’s semifinal matchup with the Danville Admirals (34-6), the Titans held a 5-0 lead after three innings, only to see Danville storm back and win the game 8-6.

Freshman pitcher for the Admirals, Brady Baxter, earned the win in relief. He pitched four and one-thirds innings, coming in for starter Ethan Wood, giving up one run on three hits, with one walk and three strikeouts.

Senior Josh Barnett took the loss for the Titans, pitching four innings, giving up eight runs on eight hits, with no walks and two strikeouts.

This game started off really well for Mercer County, who were riding a four-game winning streak, including an 8-0 victory over the Admirals 11 days prior.

Junior Dillon Warren hit an inside-the-park home run in the first inning to put the first run on the board for the Titans.

After a scoreless second inning for both teams, the Titans added on to their lead in the top of the third inning.

Senior Jamason Sherrow drove in sophomore Landon McGinnis with a single into right field, Baughman hit into a fielder’s choice, which scored senior Tanner Murphy. The last two runs were scored off an error and a steal of home by Baughman.

The Titans were sitting in a good spot heading into the bottom of the third inning after torching the Admirals for four runs in the top half, but the Danville bats woke up.

The Admirals tied and took the lead after shutting the Titans offense out in the top half. Two Titan errors on the field relinquished the lead to Danville. They added two more runs for some insurance on another Howe single and a sacrifice fly by Bryson Young.

The Titans trailed by three runs after five innings and needed the bats to stay hot.

After Baxter relieved Wood on the mound, things started turning for the Danville lineup.

McGinnis grounded into a fielder’s choice, scoring the sixth run for the Titans, but the Admirals held on and earned a berth in the 12th Region title game.

“We left it all out on the field. We jumped on them early and they did a good job of making a comeback,” said Head Coach Adam Shartzer. “We just ran out of gas. If a few situations could’ve went the other way, the result could’ve been different.”

“I told them after the game that they had accomplished more for this program than a lot of other teams. Being 46th District champions is something to be proud of and something they will always remember. With as much adversity they had faced the past few weeks, they deserved to go out on top. Every one of them will go on to do special things following high school.”

This game was one of the most thrilling victories in the Shartzer era.

After looking like a beaten team heading into the seventh inning, the Titan bats woke up when they needed to and Baughman came up with the winning hit to send his team to the 12th Region semifinals.

Barnett earned the win on the mound in relief of Dillon Warren. He pitched one and one-thirds innings, giving up one hit and no runs, with no walks and three strikeouts.

Tito Ruiz took the loss for the Cardinals and he only threw two pitches. He relieved starter Braden Dobbs in the seventh inning.

Wayne County started out hot. They scored two runs in the first inning off of a Titus Jones two RBI-single. Jayden Keith scored on an error by Warren on the mound and the Titans found themselves down by three after two innings.

The Cardinals added two more runs after a two-run shot by Dobbs into the right field bleachers and it was quickly 5-0.

One thing this Mercer County team doesn’t do is quit. They erased an eight run lead to Western Hills back in April and were always capable of being tough to the final out and that’s exactly what happened.

The Titans scored two runs off error after sophomore Sammy Berger grounded into a fielder’s choice in the fourth inning and trailed 5-2 heading to the bottom of seventh inning. This was when the Titan magic started.

McGinnis worked a walk to lead off and Murphy reached on error. Tatum singled into left with one out to score two runs and Sherrow came through in the next at-bat with a single into left field, tying the game at five.

Up came Baughman. After fouling off the first pitch, he singled into left field, scoring the game-winning run and sending the Titans to the semifinals. 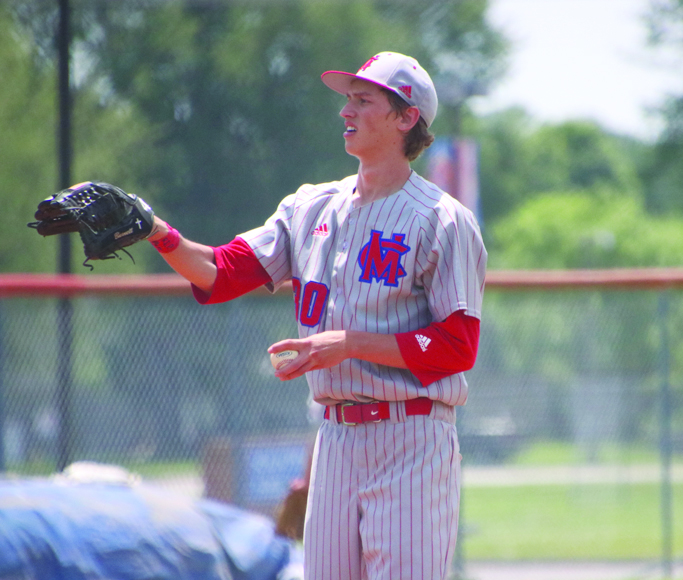 Mercer County senior Josh Barnett warms up before facing off against Danville in the 12th Region Tournament semifinals on Sunday, May 26, at Southwestern High School in Somerset. 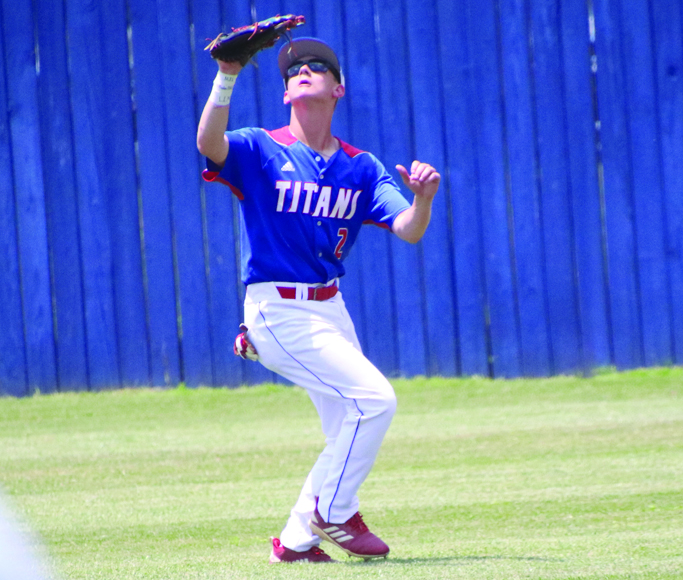 Mercer County senior Cameron Warren shields the sun for the fly ball against Wayne County in the first round of the 12th Region Tournament on Saturday, May 25, at Southwestern High School. 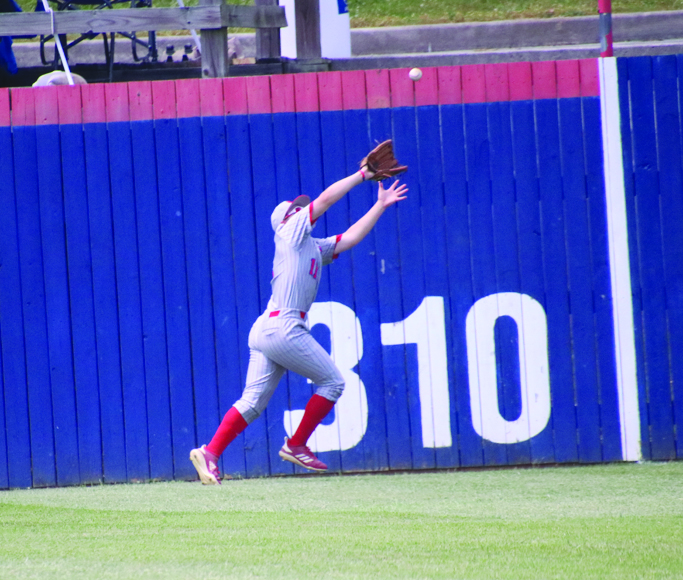 Mercer County sophomore Sammy Berger runs a long way and makes the catch against Danville in the semifinals of the 12th Region Tournament on Sunday, May 26. 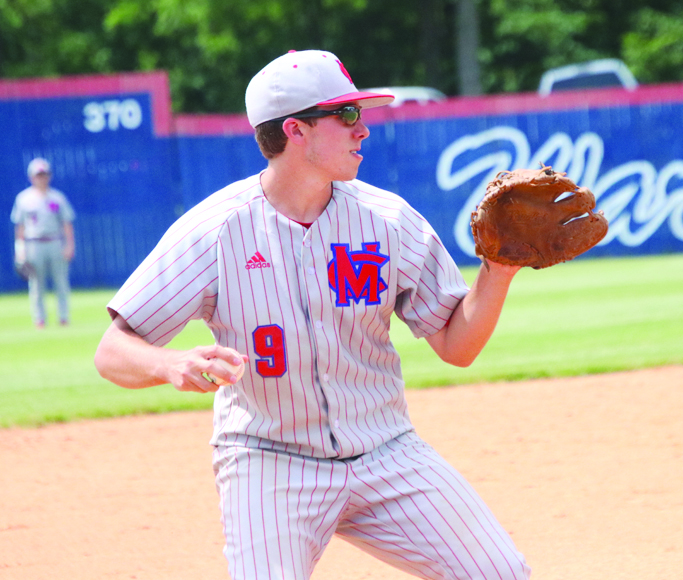 Mercer County sophomore Landon McGinnis scoops up a ball at third base before throwing to first for the out in the 12th Region semifinals against Danville on Sunday, May 26.