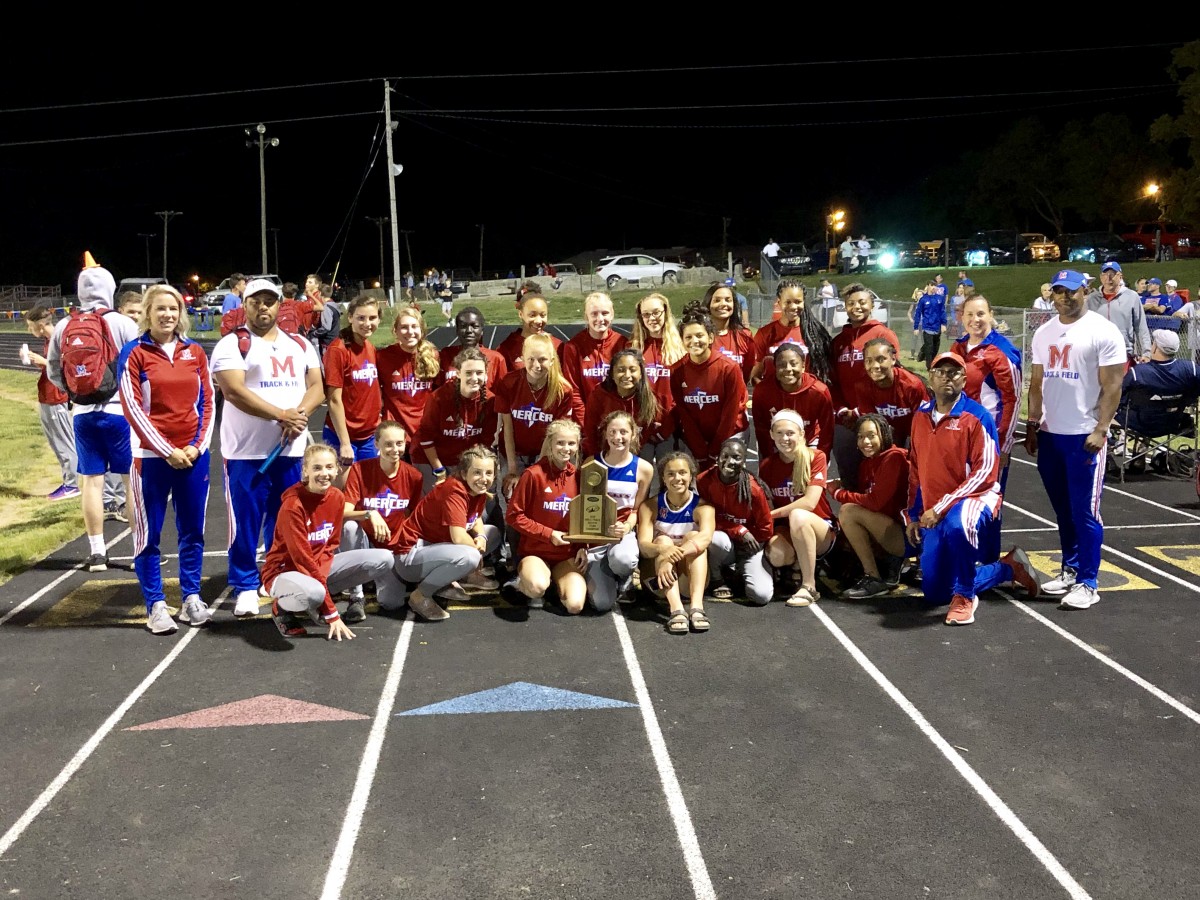 It has been an emotional few weeks for the Mercer County Titans track and field program, but things are certainly looking up.

“I sat them down yesterday and went through every scenario and made it clear to them how important it was for them to come out and to perform because the key was to get everybody to the next weekend,” said Head Coach Terry Yeast. “I told them if they do what they’re supposed to do, they have a chance to win and if we get everybody through, then it gives you another chance in a week. With all the emotions up and down this past month, I am so proud of this group.”

Junior Jasmine Claunch had another impressive meet. She won and broke the school record in the long jump (17 feet, 3 inches) and won the triple jump by 10 inches (36 feet, 10.5 inches) to claim the title as the region’s best jumper. Claunch will try to defend her title at the Class AA state track meet on Friday, May 31 at the University of Kentucky.

“I’m so proud of her getting another school record today in the long jump. She’s been waiting for that 17-foot jump all season and she finally had two of them today,” said Yeast. “I’m just extremely proud of her.”

“To do what she’s doing at 14 years of age in the middle of AAU basketball makes me really proud of what she’s been able to accomplish in her career so far,” said Terry Yeast. “She has done everything that I’ve asked her to do and I’m just so proud as a dad and as a coach.”

Junior Zoë Yeast claimed another region title in discus (127 feet, 4 inches) and was runner-up in shot put (35 feet, 2 inches). She will be heading back to the state tournament for another run at state titles in both events. Yeast will be going for a three-peat in discus at state and will look to reclaim the shot put title after coming in second place last season. As a freshmen, she swept both events. Last season, she talked about never settling and always striving to be better.

“It’s honestly a matter of staying humble to be able to go out and practice like you’ve never won that title,” she said. “You just have to have the drive to keep pushing to get better each and every day.”

Eighth grader Clayra Darnell swept both distance runs. It is safe to safe she will be a force to be reckoned during her high school years in the region and around the entire state. She finished the mile race in 5:540.99 and the two-mile race 12:19.30 to head back to state in both events.

Darnell will also be heading back to the state meet in the 4×800 meter relay along with Blevins, Steele and sophomore Erin Darland. They claimed top spot in the region in a time of 10:02.91.

Freshman Love Mays, in her first season on the track, has shown she has a promising future in the sport. She was runner-up in the 100 meter hurdles (16.37 seconds) and third in the 300 meter hurdles (49.47 seconds). Sophomore Harlee Settles placed seventh (53.95 seconds)

Blevins, Steele, Piazza and junior Calicia Smith are heading to state after winning the 4×200 meter relay (1:45.46). Smith, Steele, Claunch and sophomore Jacey Catlett will also be competing next weekend at UK after claiming the runner-up spot in the 4×100 meter relay (50.73 seconds).

Blevins finished behind Rockcastle County’s Victoria Dotson in the 800 meter run (2:25.10), but will also be heading back to the state in the event. Blevins has put together quite the career in cross country and track and field. She has competed in both state tournaments every year of her high school career and will likely do so next season.

Smith placed fourth in the 200 meter dash (27.53). In order to qualify for the state meet, the top-10 times in every track event outside of the top-2 will qualify. Results haven’t been announced yet, but Smith will likely get a spot.

Junior Joselyn Flores placed fourth in the region in pole vault (7 feet) and Catlett finished behind her in fifth (6 feet, 6 inches).

Boyle County, who finished in second with 150 points, will likely be the top challengers for the Lady Titans at state, and Yeast knows that.

“I really feel like it’s going to be a battle between Mercer County, Boyle County and Paducah Tilghman which is typically the strongest team in Class AA.,” he said. “But, we’re excited. The girls understand where they are and I think we’re in the driver’s position if we do what we’re supposed to do.”

After losing a lot of seniors the last three season that were pivotal in the back-to-back state title runs for the boys track team, a lot of newcomers had to step up. One of those newcomers was junior Dillon Warren, who is in the middle of baseball season, finished runner-up in the region long jump (21 feet, 3 inches), qualifying him for the state meet in his first year in track and field. He also placed fifth in the 200 meter dash (24.35 seconds) and seventh in the 100 meter dash (11.63 seconds).

Just the day before, Warren won the 46th District baseball championship on the Titan baseball team.

“He (Warren) hasn’t practice track in a month because baseball is so busy right now, and for him to do what he’s done the past few days in baseball, and then to show up today and have the day he had makes me so proud of him and what he’s been able to accomplish this season.” 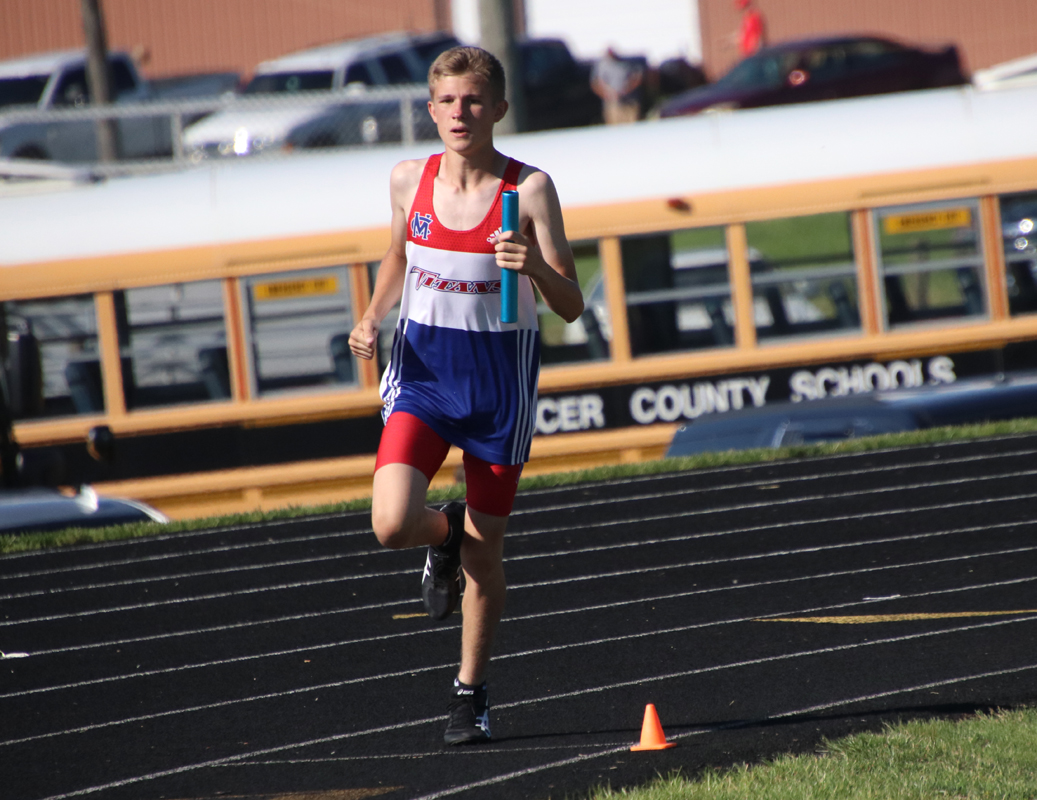 Freshman Jonah Lewis turns a corner in a relay race at the Class AA Region 5 meet on Tuesday, May 21, at Boyle County High School. 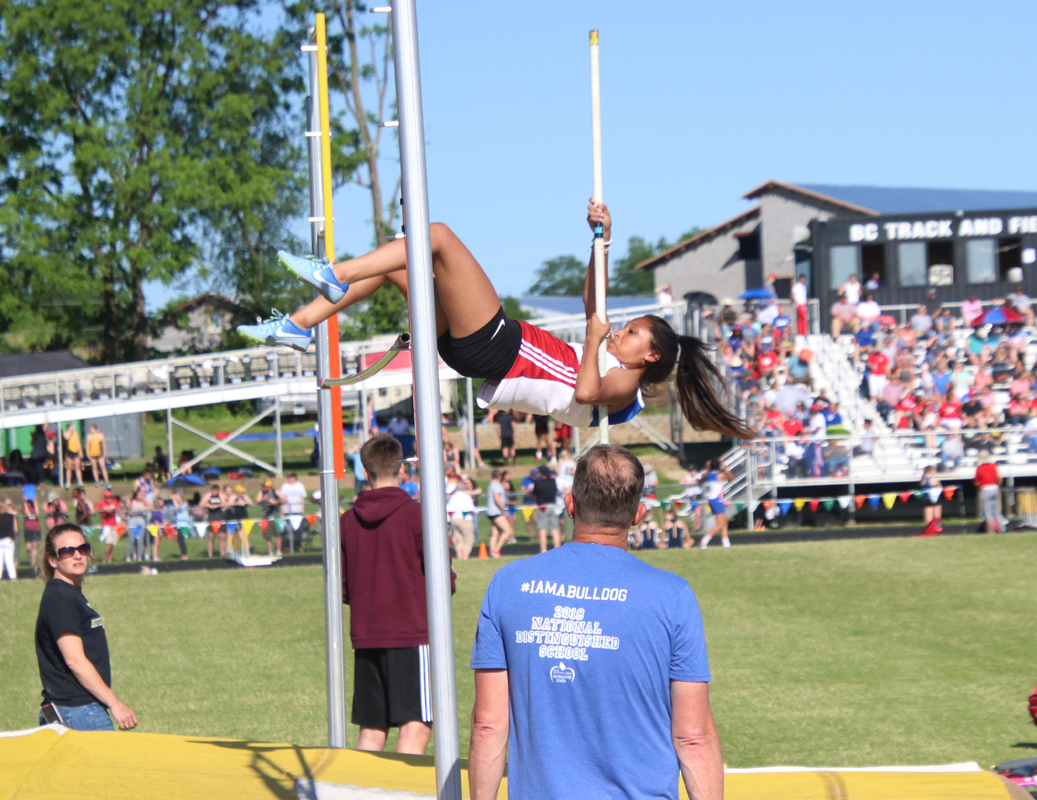 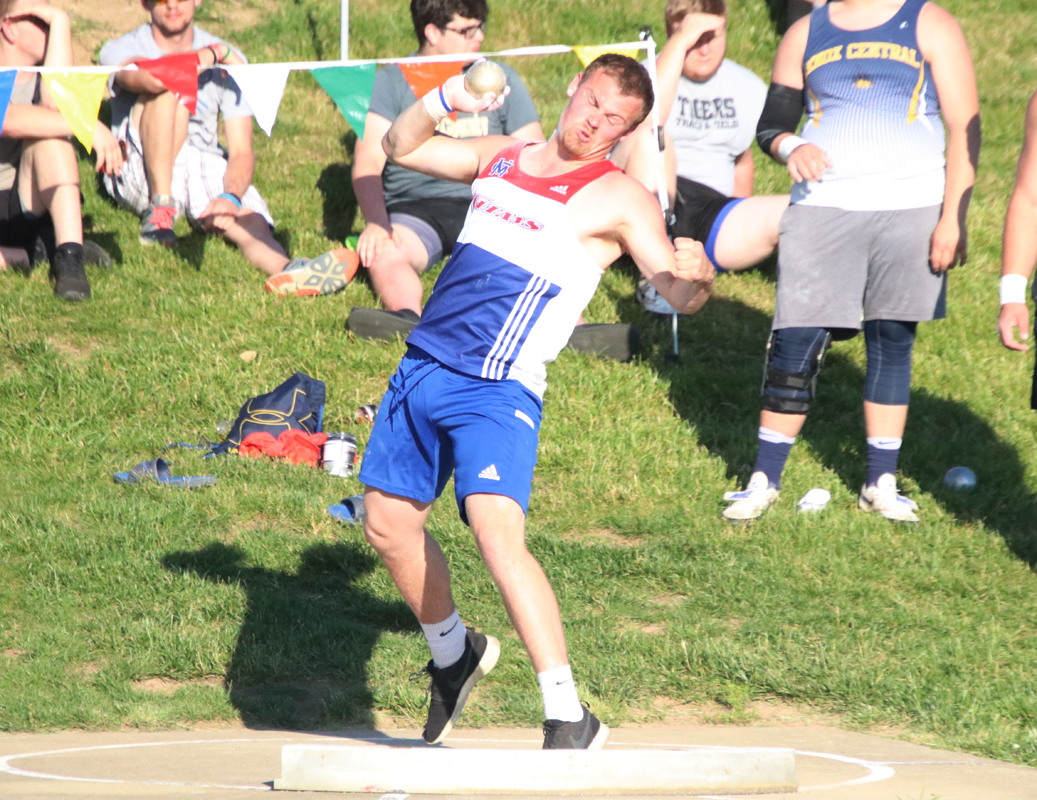 Senior Blake Russell uses all his power in the shot put event. 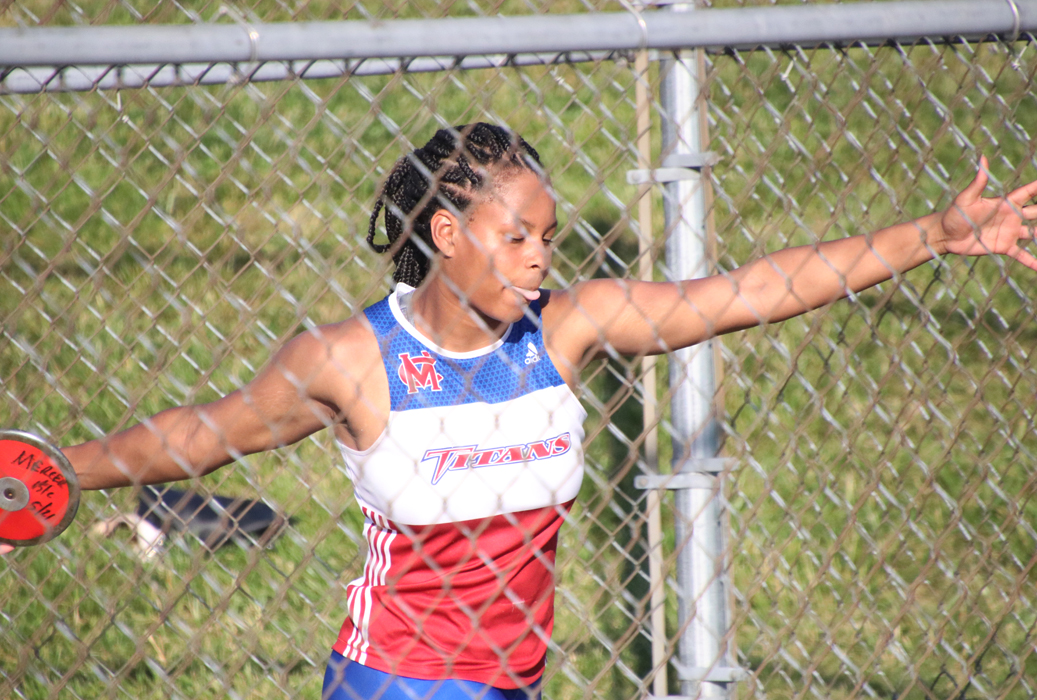 Junior Zoë Yeast gets set for launch during the discus throw. 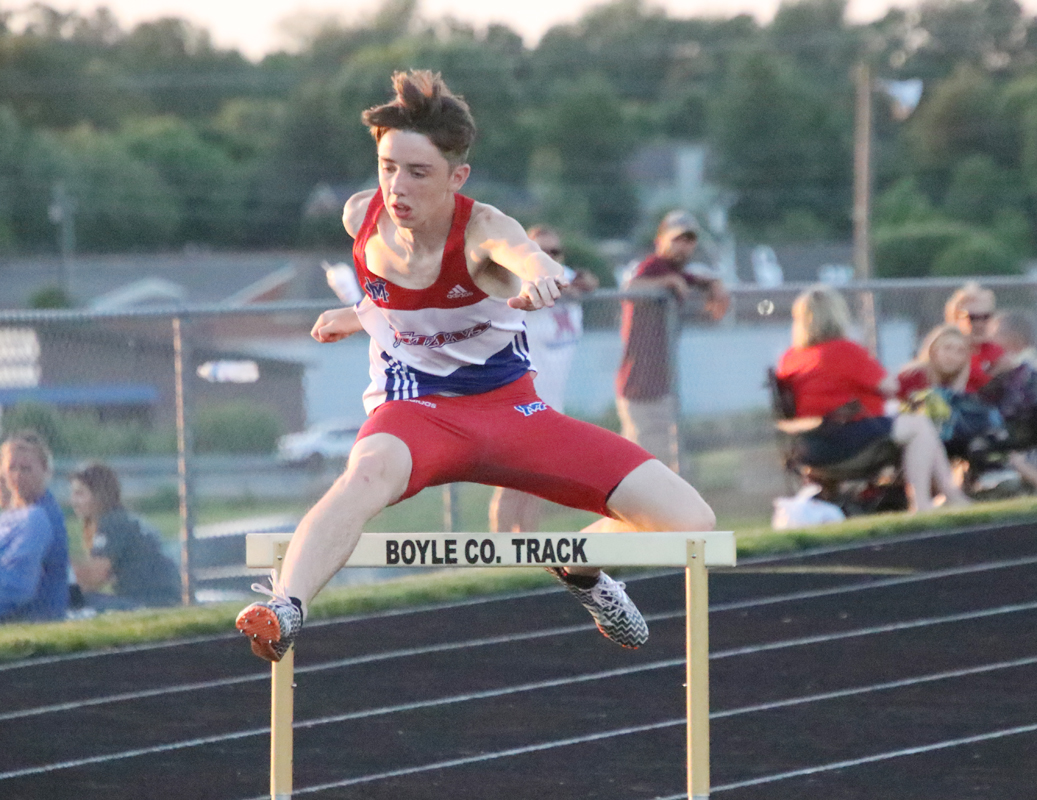 Senior Carter Edelen jumps over a hurdle during an event at the Class AA Region 5 meet. 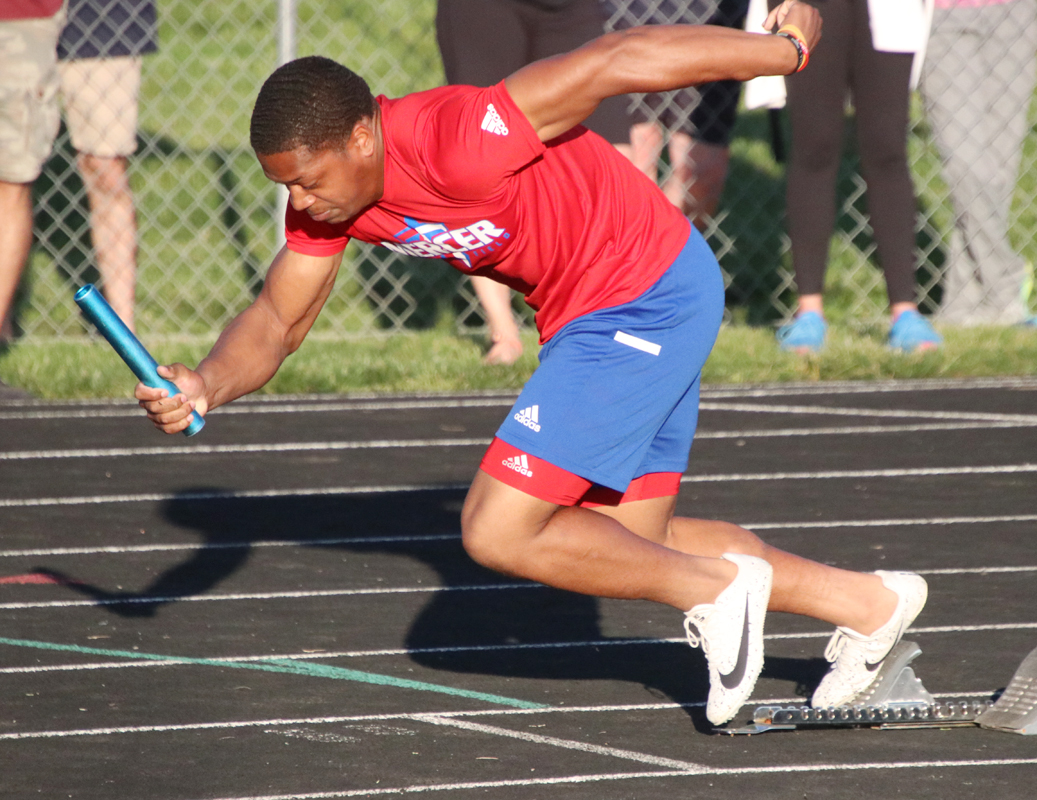 Junior Malachi Yulee bursts out of the gate during a relay. 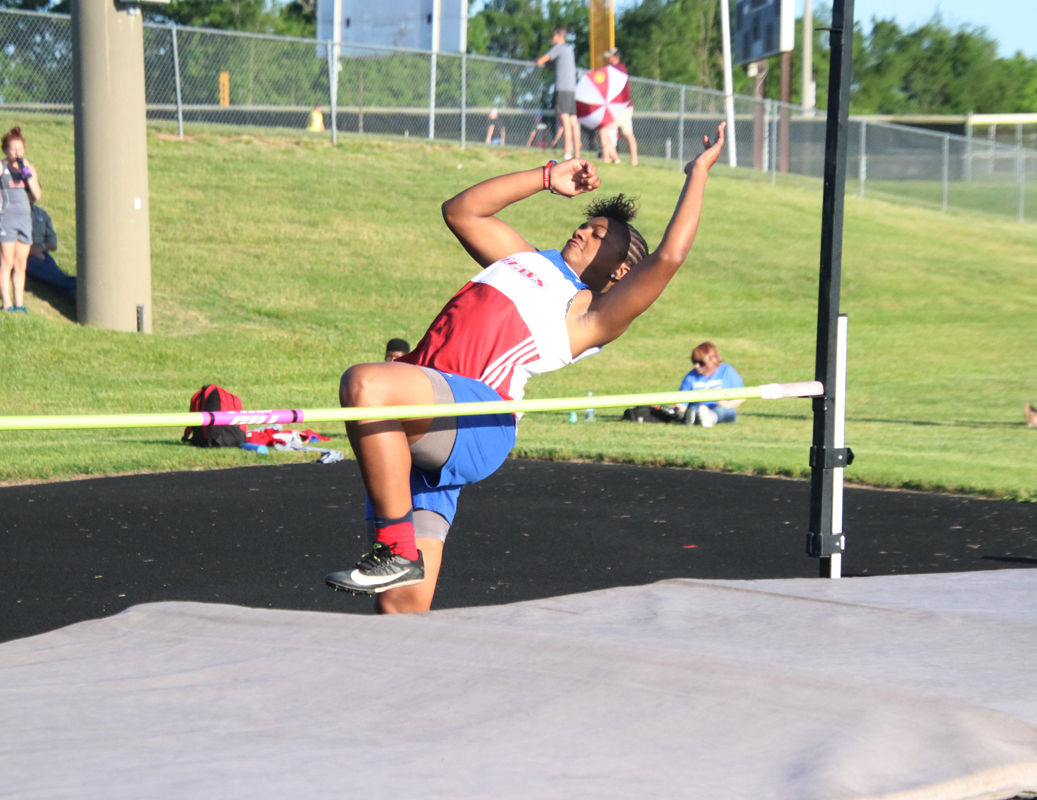 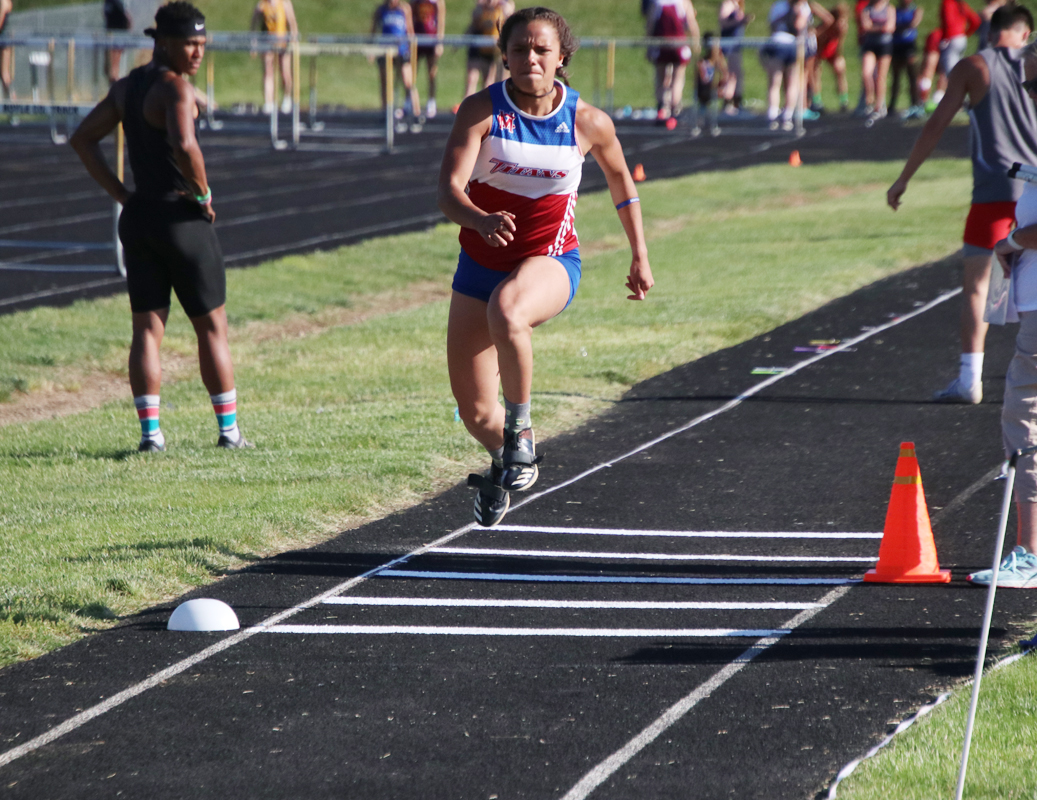 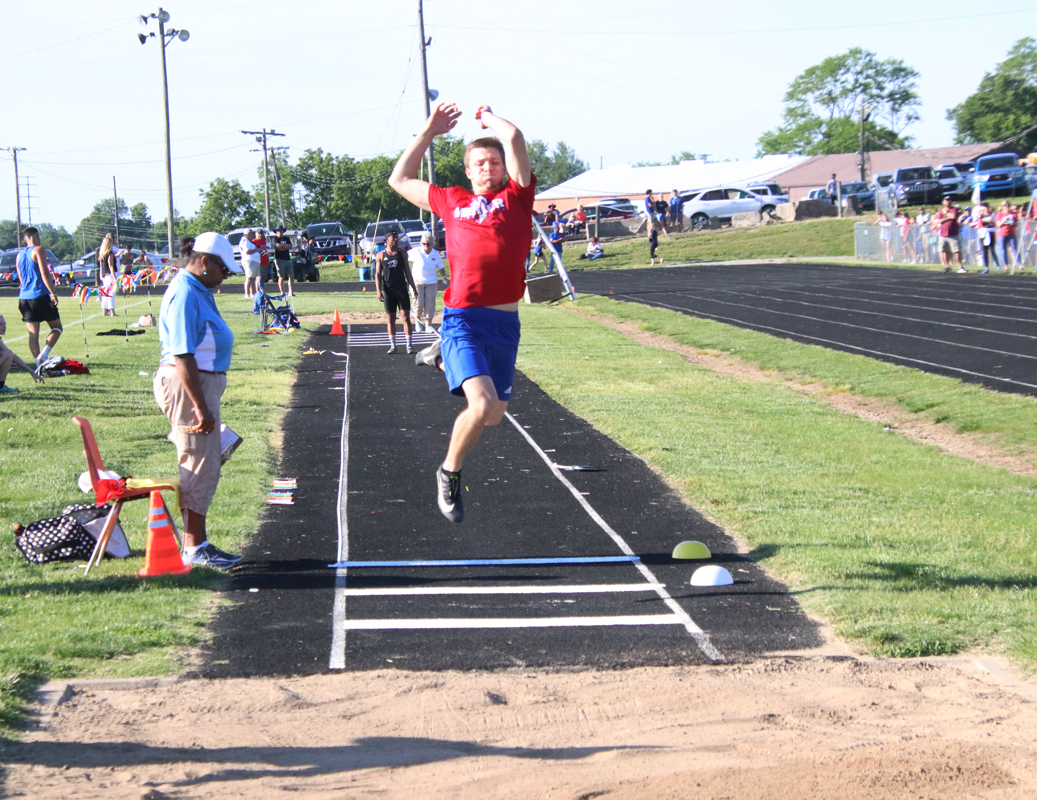 In his first year on the track and field team, junior Dillon Warren claimed runner-up in the long jump. 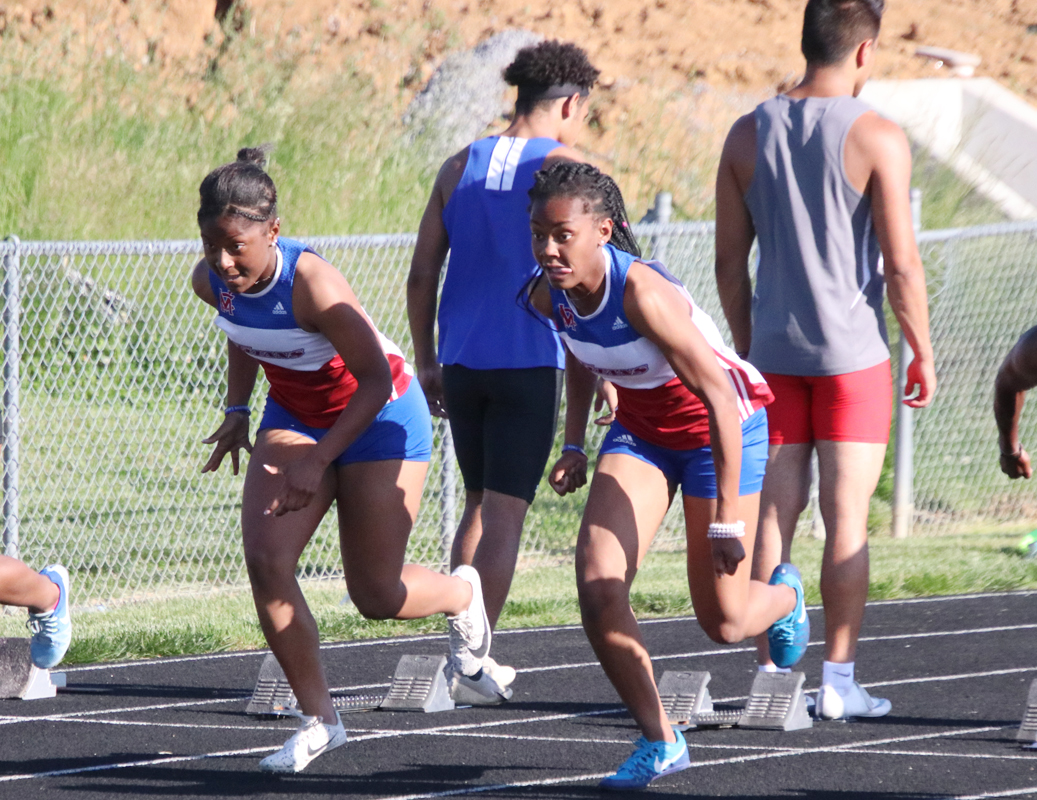 Junior Calicia Smith (left) and eighth grader Timberlynn Yeast bursts out of the gate side-by-side in the 100 meter dash. 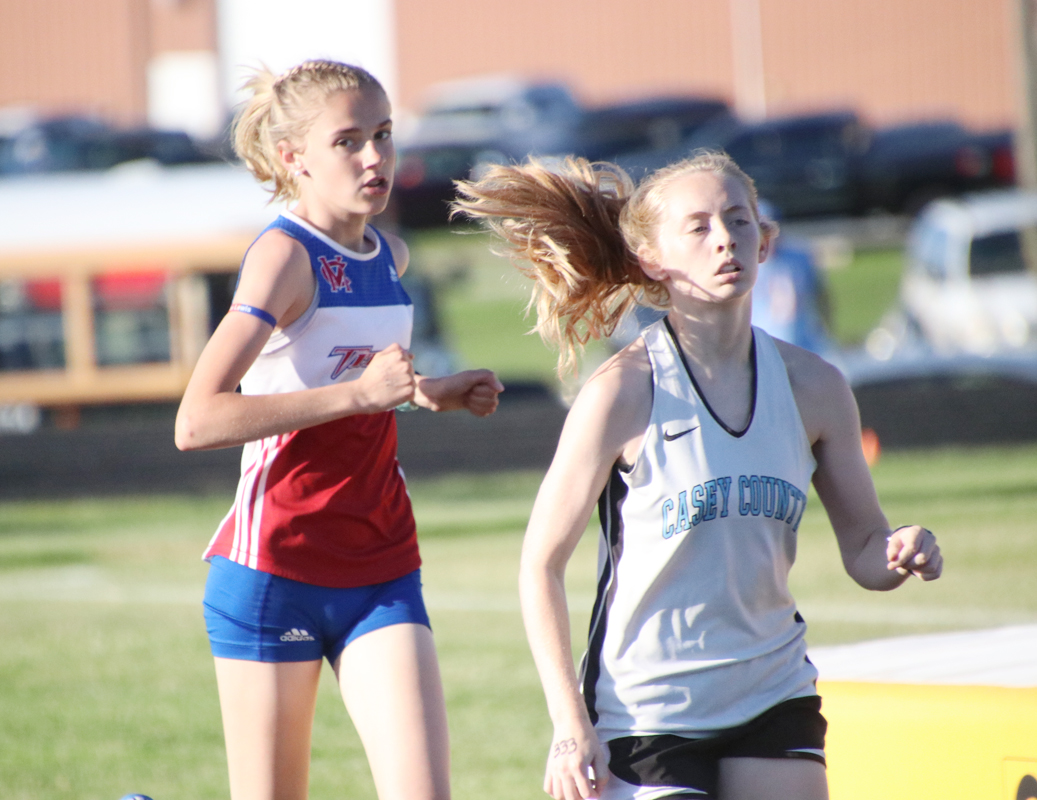