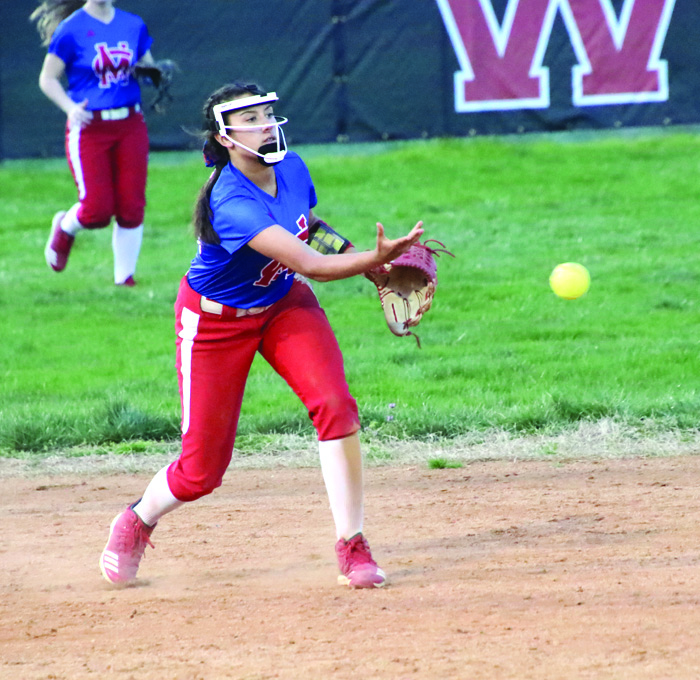 Sophomore Ry’Ann Tharp fields a grounder at short and flips over to second base for the force out against West Jessamine on Thursday, April 11. (Photo by Arpan Dixit)

Every game on the schedule is an important one, but district games just mean a little more.

In the first district matchup for the visiting team, the Mercer County Lady Titans (7-7) defeated the West Jessamine Colts (5-8) by a final score of 4-3 on Thursday, April 11.

Addison White took the loss for the Colts, pitching all seven innings, giving up four runs on nine hits.

West Jessamine struck first in the bottom of the first inning off a RBI-double by Olivia Bryant.

After a scoreless second inning for both squads, the Lady Titans scored two in the top of the third off of a two RBI-single by senior Emily Rawlings.

Rawlings accounted for three of the four runs scored for the Lady Titans.

“It’s been a pleasure watching her this year because she’s really had good  at-bats along with good quality defense at first base,” said Head Coach Rob Tharp. “It’s been nice seeing that out of her and I know she feels good about that. She’s been doing things like that all year. It’s good for her and definitely good for us.”

Find the rest of the story on page 7B of this week’s issue of the Harrodsburg Herald or click here to to subscribe.