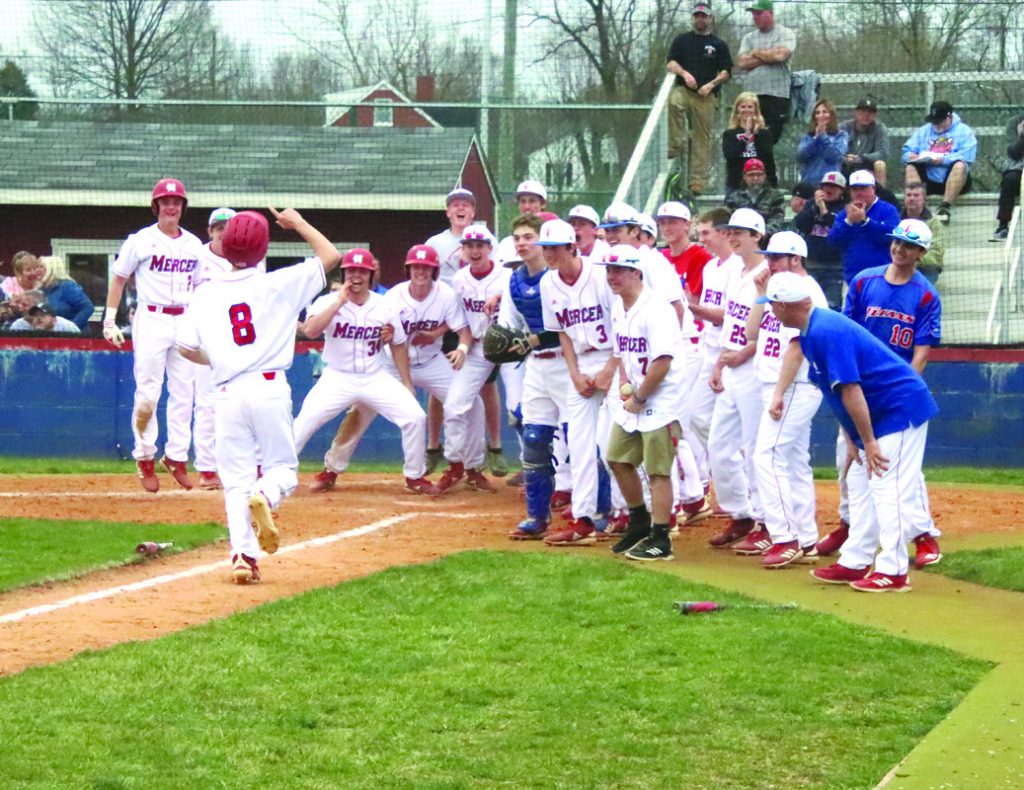 Freshman Cayden Devine (8) is greeted by his teammates at home plate after hitting a go-ahead three-run home run to complete the comeback against Western Hills on Thursday, April 4. The Titans defeated the Wolverines 10-9. (Photo by Arpan Dixit)

In one of the more improbable wins for Mercer County baseball (9-2) in recent memory, freshman Cayden Devine came through against Western Hills on Thursday, April 4.

After senior Nathan Tatum’s RBI-single and senior Jamason Sherrow’s two-RBI double to cut the deficit to two runs, Devine homered down the left field line to put the Titans up 10-9 over the Wolverines in the bottom of the sixth inning.

After his performances against Collins and Western Hills last week, Warren was nominated by Kentucky.com for Player of the Week. Information on the poll can be found on twitter (@HLpreps) or Kentucky.com. Voting ends on Friday, April 12 at 12 p.m.

“That was the worst five innings we played all season. I’m glad we got that out of our system,” said Head Coach Adam Shartzer. “Our guys came back and just battled. We couldn’t get a lot of things going early. I think we had two hits up until that sixth inning and we just did a great job battling back. Cayden (Devine) did an unbelievable job. I wish things could’ve gone different for him on the mound, but he came up with a big hit for us and that’s a lot of guts from a freshman.”

Devine started the game, but was taken out after two innings. He pitched two innings, giving up five runs on five hits, with two walks and three strikeouts.

Ultimately, Devine made up for it with his only hit of the game.

The Wolverines scored two runs in the first inning off of RBI-singles by Connor Purvic and Nick Moore.

Unfortunately for the Titans, that tie didn’t last long.

Western Hills hit back-to-back home runs off the bats of Purvis and Brandon Webb to take a 5-2 lead after two innings.

The Titans cut the lead to one in the bottom half of the third inning after a RBI-triple by junior Mason Smith. Smith later scored after Tatum grounded out to second base.

Just when the Titans were clawing and inching their way back, the Wolverines had answers.

The ending to this game is why fans love baseball. All it takes is one swing or one inning to gain momentum and the Titans took full advantage.

After two scoreless innings in the fourth and fifth, the Mercer County bats woke up.

Leading up to RBI by Sherrow and the homer by Devine, the Titans had to work their way to get on base.

Senior Alex Caton drew a walk, Dillon Warren reached on error, Smith walked, which was followed by big hits by Tatum and Sherrow.

With both Tatum and Sherrow in scoring position, Devine launched his first varsity home run and was greeted by a mob of teammates at home plate.

“This game gives us a ton of confidence going into our matchup with West Jessamine on Tuesday,” said Shartzer. “Our goal for this year was to be the number one seed in the district, that’s what we wanted, and it all starts at West on Tuesday. We think we got a pretty good building block coming that way.”

Shartzer also talked about the team’s offense and how it matches up with anybody when they are clicking.

“If we get runners on, we can make things happen. Our offense is just as good as anybody’s,” he said. “We want to get up there, swing the bat and that’s what we’re doing.”

The Titans will be back on the diamond Tuesday, April 9, as they travel to West Jessamine for their first district matchup of the season. First pitch is set for 6 p.m.