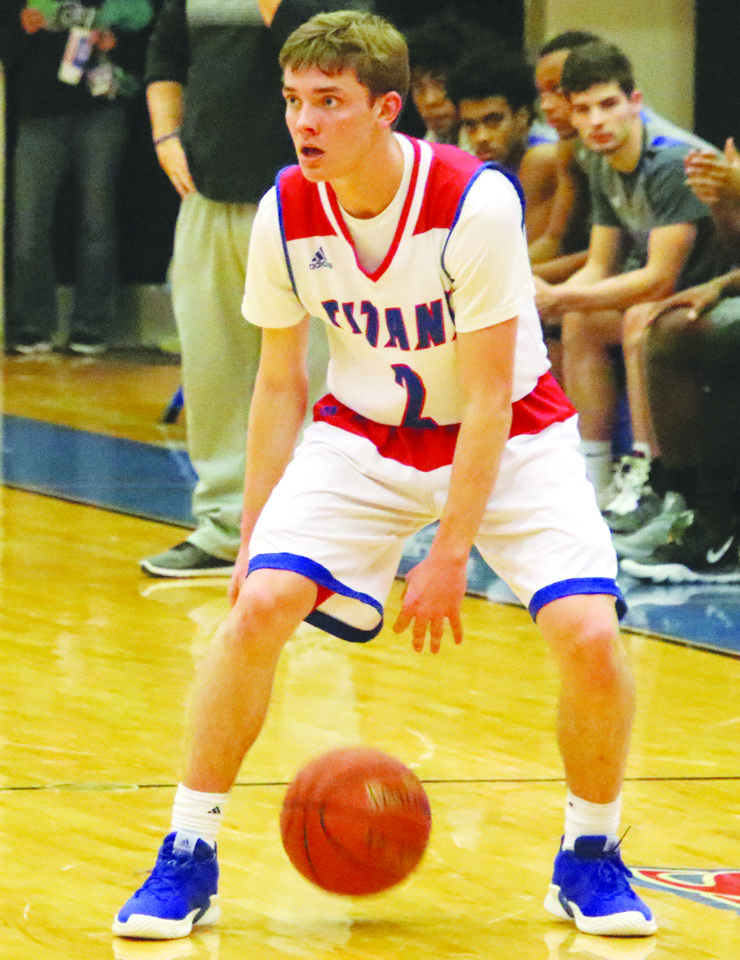 Picking where you want to go to school can always be a stressful moment in one’s life, but for Mercer County basketball senior Carter Baughman, that time is over.

Baughman, the 12th Region Player of the Year this past season, announced last week on his twitter  page (@BaughmanCarter) that he will be attending Centre College in the Fall to further his academic and athletic career.

“The amount of effort they put into recruiting me stood out. All of their letters were handwritten, they came to all the games they could and their players always made me feel welcome on my visits or at games,” said Baughman.

To get to where he is, Baughman put in a lot of time in the gym. Just ask Mercer County Head Coach Josh Hamlin.

“Carter’s work ethic has really allowed his game to grow. In a time where everyone is looking to go here or there to get trained, he took his weaknesses and spent time in the gym,” said Hamlin. “He spent a lot of time in the gym by himself to correct and make those deficiencies into strengths. The ability to get countless shots up in the gym when others might have been playing video games or hanging with their friends really allowed Carter’s game to grow. I’m just really happy to see how much I’ve been able to see him improve from a good eighth grader to winning the player of the year in our region this season.”

He also shot over 40-percent from three in his final three years and shot 44-percent from beyond the arc his senior year.

Baughman also had the opportunity to play alongside the state’s best players the last few seasons.

He also played alongside 2019 Kentucky Gatorade Player of the Year Isaiah Cozart of Madison Central and 2019 Mr. Kentucky Basketball Dontaie Allen of Pendleton County for his AAU team, M.A.T.T.S. Mustangs last summer. He said playing alongside those players really helped his development.

“Playing with players like Trevon, Isaiah and Dontaie has made me improve tremendously. Being on the court with them and getting a feel of playing with someone who is that good just made it a lot easier for me to connect with them on and off the court,” said Baughman.

A big part of the recruiting process is developing a strong relationship with the college coach and recruiting staff, something Baughman has had no problem doing.

Playing time wasn’t guaranteed, and that was totally fine for Baughman. It was something he loved to hear and he accepts the challenge.

“Throughout my time talking with Coach Mason and the staff, they always told me how bad they wanted me and how much they liked my game, but never promised anything, and I never anticipated them doing so,” he said. “I am just going to go in and work hard like I always have and whatever it is they need me to do, I will do it.”

Baughman’s recent visit to Centre over Spring break really factored into his decision to become a Colonel.

“The players made it easy for me to connect with them and be around them,” he said. “And we were getting up and down on the court they made it fun so that is something I’m really excited about.”

Hamlin had nothing but praise for Baughman.

“He is a tremendous person. He is an extremely hard worker and someone who is a good teammate,” said Hamlin. “I am really happy to have had the opportunity to coach Carter. He personifies what we want our players to resemble in this program because he works hard on the court and in the classroom, while being a terrific young man in the community.”

Baughman ended his career as a 1,000-point scorer, 12th Region Player of the Year, three-time 46th District champion and a two-time all 12th Region team member.