Dillon Warren, Josh Barnett and Mason Smith all earn wins on the mound in the Volunteer state 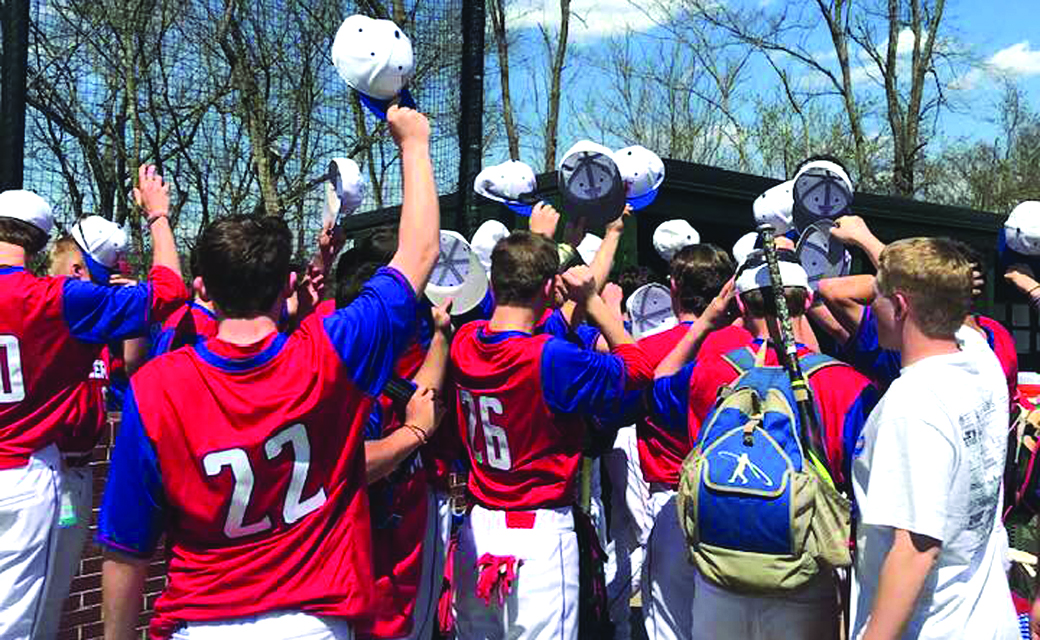 The Mercer County Titans baseball team gather in a team huddle after an impressive 3-0 trip to the Smoky Mountain Invitational in Gatlinburg from Friday, March 29 until Saturday, March 30. (Photo Submitted by Jenny Sherrow)

The Mercer County Titans (8-1) baseball team entered the Smoky Mountain Invitational in Gatlinburg on a four-game winning streak, and left with that streak up to seven games, going 3-0 against competition.

“It was a great weekend for us. The only thing we came in knowing about all three opponents is that they only had one loss between them,” said Head Coach Adam Shartzer. “Our pitchers threw strikes and defensively, we didn’t commit an error all weekend. We came out hitting the ball and allowed our pitchers to pitch with a lead.”

Pigeon Forge was Mercer County’s toughest opponent over the weekend, but the Titans handled them by a final score of 6-2.

“Our toughest opponent was the host team, Pigeon Forge. Dillon (Warren) was able to settle in after a two-run first inning. Offensively, everyone executed and did their job. The atmosphere was unbelievable. Every person on our team and in the stands was into that game. It was definitely the best game we’ve played all season. We learned a lot about ourselves as a program.”

In their final game of the invitational, the Titans def. GBC by a final score of 13-0 in five innings.

Senior Josh Barnett earned the win for the Titans, pitching three innings, giving up no runs on one hit, with eight strikeouts and no walks.

Sophomore Rylan Southworth came in for relief, pitching two innings, giving up no runs on two hits, to go along with three strikeouts.

Senior Jamason Sherrow went 1-for-2, was tied for a team-high with two RBI and two runs scored.

Junior Keegan Bottom went 1-for-1 with two RBI as well, along with one run scored.

Senior Nathan Tatum, sophomore Landon McGinnis, junior Mason Smith and freshman Cayden Devine were all tied for the team lead in hits with two each.

Along with Sherrow and Bottom, senior Alex Caton, sophomore Sam Baughman, junior Kelton Sallee, senior Cameron Warren and sophomore Sammy Berger all had one hit each.

After winning their first game of the day against Cincinnati Country Day, the Titans played a late afternoon game against Pigeon Forge, defeating them by a final score of 6-2.

After giving up two early runs in the first inning, the Titans answered back in the third inning.

Dillon Warren scored on an error and Smith scored by stealing home to tie the game.

Cameron Warren bunted into a fielder’s choice in the top of the eighth inning to score the go-ahead run. Devine came up later that inning, giving the Titans insurance runs on a two-RBI double, which was followed by a RBI-single by Berger.

The Titans came into the first game of the Smoky Mountain Invitational winning their first five out of six games, and that hot start continued with a 10-0 win in five innings.

Smith earned the complete game win by pitching five innings, giving up no runs on three hits, to go with one strikeout.

Dillon Warren was scorching hot at the plate, going 3-for-4 with four RBI and one run scored to lead Mercer County. He was the only Titan with multiple hits.

McGinnis, Tatum, senior Tanner Murphy and Cameron Warren drove in one run each to round out the scoring.

The Titans improve to 8-1 on the season, holding the third best record in the 12th Region behind the Danville Admirals (10-1) and the Southwestern Warriors (10-0).

Mercer County will be back on the field today, Thursday, April 4, as they host the Western Hills Wolverines. First pitch is set for 5 p.m.