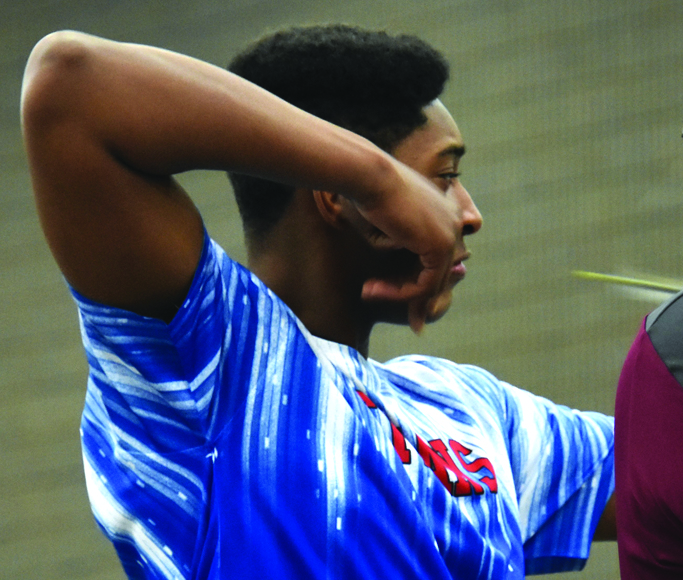 Freshman Zeydan Jackson shoots his arrows during the NASP State Tournament on Saturday, March 16, at the Kentucky Exposition Center in Louisville. (Photo Submitted by Eric Miller)

After scoring their highest result at the NASP State Tournament on Saturday, March 16, at the Kentucky Exposition Center in Louisville, the Mercer County Titan Archery program is gearing up for Nationals.

Before the state tournament, Mercer archery took their talents to the KHSAA Region 9 Tournament, at Wayne County High School on Saturday, March 9.

The Titans placed third at region, while the Lady Titans finished fourth.

At the state tournament, Mercer County also scored their highest point total in program history with 3,308 points. They also placed 35th out of 107 total teams to participate, their highest finish ever.

“Words can’t describe how proud I am of these kids. Before we got off the bus, I asked them to bring down the walls in effort, and they did,” said Head Coach Eric Miller. “These kids have worked so hard and came together as one. To move up five spots at NASP State was huge for this team. They wanted to make a statement for Mercer County Archery, and they did, with no fear.”

Although this year’s archery squad didn’t tally the same amount of points as last year’s team, the 2018-2019 version of Mercer archery made history.

“The 2017-2018 team holds the top score for our program, but you can’t judge greatness by just a score. This team, on paper, may not have topped last year’s team for top score, but they competed all season at a very high level,” said Miller. “They placed us the highest ever finish at the pre-state meet, at KHSAA regions along with top team scores at region and pushed us to the highest score ever at NASP state to move us up five spots in the state.”

There is not separation in division in archery. The Titans and Lady Titans competed against schools ranging from 1A to 6A.

Listed below are the results from the state meet, starting with the female group:

Twenty four Archery members qualified for the 2019 NASP Eastern Nationals at the Kentucky Exposition Center, from Thursday, May 9 until Saturday, May 11.

“I can’t wait for NASP Nationals. I love this tournament. Getting to meet the best of the best from all over the nation is really cool,” said Miller. “We will go down there and have the best time shooting arrows to close out the season. I’m sure I’ll be standing there like a proud father.”

Before Nationals, Mercer County will compete in the KHSAA state meet in Bowling Green on Tuesday, April 30.

KHSAA and NASP are a little different. All top tier teams compete at NASP, while only the top two teams and top three males and females who are not on state qualifying teams in each region make state. Robinson and Heard along with four others from the region filled those individual spots.

Miller reflected on this past season and on his group.

“This was a wonderful season for Mercer County archery. You don’t have to be the strongest or fastest athlete. You can be the biggest book worm, computer geek or whatever,” he said. “I’ve seen people in wheelchairs, missing limbs and vision impairments compete in archery. It gives a sense of accomplishment to those that can’t compete in other sports. We not only teach archery, but we also try to teach focus, discipline and accountability. Along with the boosters, assistant coaches and support from our athletic department as the community, we have put together another great sports program here at Mercer.” Senior Cole Clark locks on his target and prepares to shoot at the NASP State Tournament on Saturday, March 16, at the Kentucky Exposition Center in Louisville. Senior Ethan Heard launches his arrows and gets ready for a shot at the NASP State Tournament on Saturday, March 16, at the Kentucky Exposition Center in Louisville.