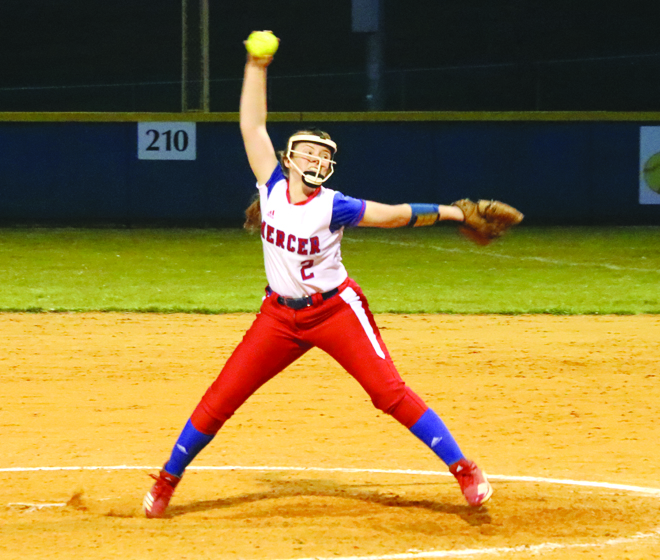 Here is a recap of the Classic and a game prior to that against George Rogers Clark.

In the final game of the Lady Titan Classic, Mercer County fell to the Anderson County Lady Bearcats by a final score of 5-1.

Freshman Elle Prewitt took the loss for the Lady Titans after pitching two innings, giving up three runs on three hits and one walk.

The Lady Bearcats scored the first five runs of the game.

Mattie Copenhaver scored the first two runs off the game on a RBI-triple in the bottom of the third inning. Jenna Beasley grounded out, scoring another run in the inning. The last two Anderson County runs were scored on a wild pitch.

Sophomore Ry’ann Tharp homered, her first of the season, to score the lone run for the Lady Titans.

“This game was locked at 0-0 for a while until the third inning. Anderson County finally put a little pressure on us with base runners and was able to break the tie,” said Head Coach Rob Tharp. “It was a matchup of pretty evenly matched teams. We just didn’t do enough offensively to keep up.”

In the most impressive win for the Lady Titans, they proved they are never out of a game until the final out, coming back from a 9-2 deficit to win 11-9 against Ross (OH) in three innings.

Miller earned the win after pitching two innings, giving up one run on two hits, one walk and one strikeout.

The Lady Titans scored the first run of the game in the top of the first inning off a wild pitch, scoring senior Emily Rawlings. Sophomore Stevie Shepherd drove in another run in the second inning off a RBI-double.

Ross scored all nine of their runs in the first two innings of play.

The Lady Titans clawed their way back, scoring nine runs in the top of the third inning to earn the victory.

Shepherd scored the tying run of an error for the game-tying run, and junior Abby Rogers followed with a game-winning RBI-double to give the Titans the 11-9 lead and the win.

“We had a sluggish start once again offensively and found ourselves down big early,” said Tharp. “The bats woke up in the third inning and we went on a tear, scoring nine runs. It was a big come-from-behind win for us.”

In the first game of the Lady Titan Classic for Mercer County, the Lady Titans dropped a contest to Minasha (WI) by a final score of 9-1 in five innings.

Prewitt took the loss after pitching two and one-thirds innings, giving up five runs on four hits, one walk and four strikeouts.

The Lady Titans scored their only run in the third inning off a RBI-single by White, scoring eighth grader Kallise Gammon.

“We did not play clean defense and struggled to apply pressure on them offensively,” said Tharp. “Kayleigh (White) and Kallise (Gammon) had back-to-back hits for our only run.”

The Lady Titans earned a comeback victory over the Lady Cardinals by a final score of 7-3.

Miller earned the win, pitching three and one-thirds innings, giving up no runs or hits, and two strikeouts.

Rawlings drove in the go-ahead and game-winning run on a RBI single in the fifth inning.

“We hit the ball very well and were able to overcome some mistakes in the field,” said Tharp. 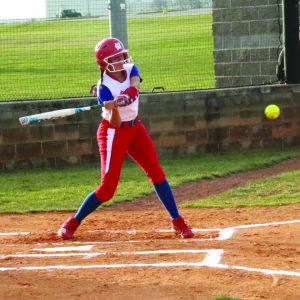 Mercer County sophomore Ry’ann Tharp swings through a fastball in a 7-3 win over GRC on Thursday, March 28. 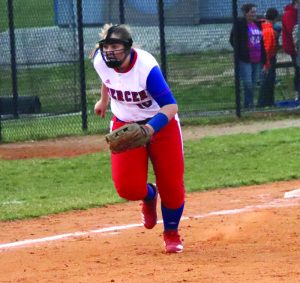 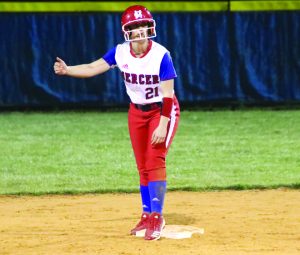 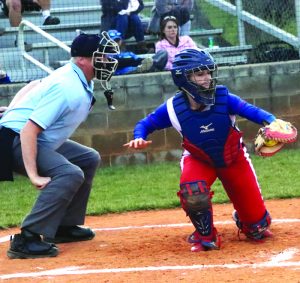