Reed up for Kentucky.com Player of the Week 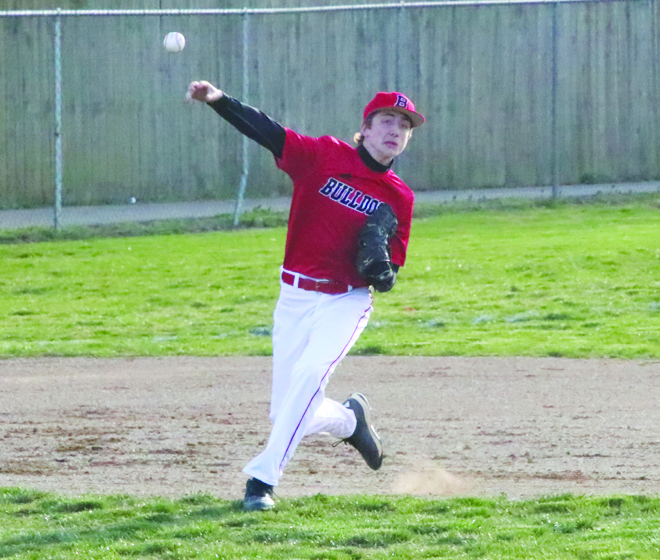 Despite their latest loss to Garrard County by a final score of 15-5 on Monday, April 1, it’s been a good week for Burgin Bulldogs baseball (7-3).

They won their previous four games and eighth grader Hunter Reed was nominated for Kentucky.com Player of the Week (March 24-30).

“Hunter (Reed) is doing a great job of being able to barrel up baseballs and go gap-to-gap, he’s got great speed and he’s got nine doubles on the season so far,” said Head Coach Donnie Edwards. “He’s pitched it well every time he’s went out on the mound so he deserves that credit of being nominated for this award. And hopefully he gets it. It would be a big boost for him and the program over here at Burgin and again, he’s an eighth grader, which is exciting.”

Bulldog fans can vote for Reed at Kentucky.com or can go to the Lexington Herald Leader’s twitter page (@HLpreps) for more information. Voting ends Friday, April 5, at 12 p.m.

Here is a recap of Burgin’s last four games.

The Bulldogs faced the Golden Lions on a chilly Monday evening. Garrard County was able to get the 15-5 win.

Seventh grader Aaron May relieved Reed in the fifth inning, pitching two innings, giving up six runs on five hits, with one strikeout.

The Golden Lions scored three runs in the first inning off of RBI by Matthew Wall and Garrett Wesley.

The Bulldogs answered back with one run in the bottom half of the first  off a RBI-single by eighth grader Noah Broce.

Garrard County added two more in the third off a single by Wesley and an error.

Sophomore Jackson Qualls stole home in the bottom half to cut the deficit to three runs, 5-2.

Unfortunately for Burgin, that was as close as they got. The Golden Lions added 10 more runs in the next three innings.

“We just have to cut out our mistakes. In a big game against a region opponent, we just have to cut out the small mistakes that we make. They scored eight runs with two outs,” said Edwards. “If we take care of business and get those outs, it’s a totally different ball game. That’s what we have to learn against big teams, we have to learn to finish. But, it’s a new day tomorrow and we have to get back on the bus and get ready for our next opponent. We didn’t help Hunter (Reed) as much as we could in the field with those little mistakes. But I’m encouraged by the way we fought back and the way we didn’t give up.”

In a pitcher’s duel, the Bulldogs earned the 3-1 win over the Cavaliers in five innings.

Broce earned the complete game victory, pitching five innings, giving up one run on five hits, to go with a game-high nine strikeouts.

Jackson Qualls scored on an error to get things started for Burgin in the top of the first. The Bulldogs added two more in the third inning after a RBI-double by Reed and a sacrifice fly by Broce.

Jenkins scored their only run on a single by Hayden Fleming.

In their first game of a two-game slate, the Bulldogs defeated the Bobcats by a final score of 10-5 in five innings.

The Bulldogs and Bobcats were tied at five heading into the fifth inning. That’s when the Burgin bats exploded for a five-run inning to claim the victory.

Reed drove in the go-ahead and game-winning RBI-double to get the scoring started in the inning.

The Bulldogs scored their next four runs on two errors, a RBI-double by Boursaw and a RBI-single by Lynn.

In the second game of their four-game winning streak, the Bulldogs defeated the Eagles by a final score of 16-3 in five innings.

Jacob Qualls started the game, but earned a no decision after pitching four and two-thirds innings, giving up one run on two hits, two walks and a game-high eight strikeouts.

Broce earned the win, his second of the weekend, after pitching one-thirds innings, giving up two runs on one hit, one walk and one strikeout.

Boursaw and Jacob Qualls drove in one RBI each.

The Bulldogs scored 14 runs in the first two innings and never looked back.

“What has been consistent all year for us through 10 games has been our pitching,” said Edwards. “Our pitching has held us up all season. It’s been our bread and butter so I’m very encouraged by our pitching and where we’re going with that. Hopefully we can continue to get better on the mound, in the field and big things will happen for us.”

Burgin will be back on the diamond Friday, April 5, when they host Wolfe County at 5 p.m. 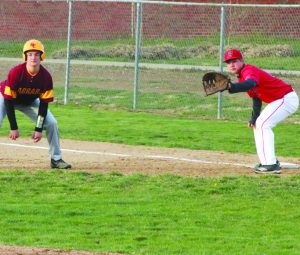 Burgin eighth grader Hunter Reed (right) is prepared to pick a runner off at first base against Garrard County on Monday, April 1. 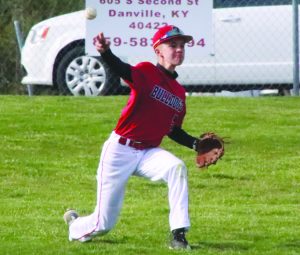 Burgin eighth grader Jacob Qualls throws in a ball from the outfield against Garrard County on Monday, April 1. 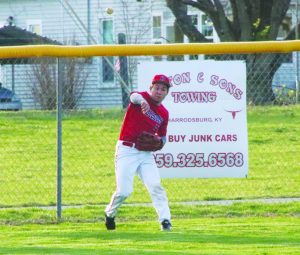 Burgin sophomore Cameron Nagel fields a ball in the outfield and hits the relay man against Garrard County on Monday, April 1. 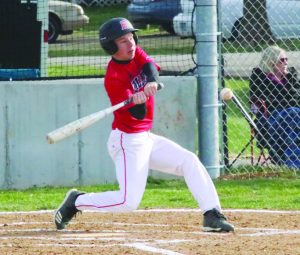 Burgin sophomore Jackson Qualls squares up for a pitch against Garrard County on Monday, April 1. 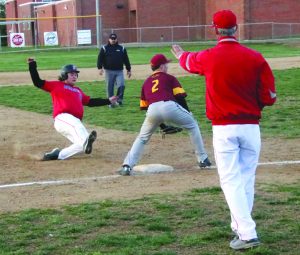 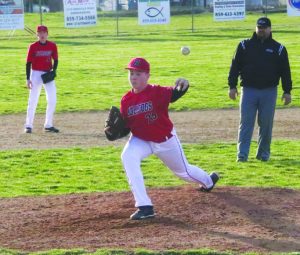 Burgin seventh grader Aaron May gets some work in on the mound against Garrard County on Monday, April 1.