“To whoever was responsible for my award, I thank you from the bottom of my heart” 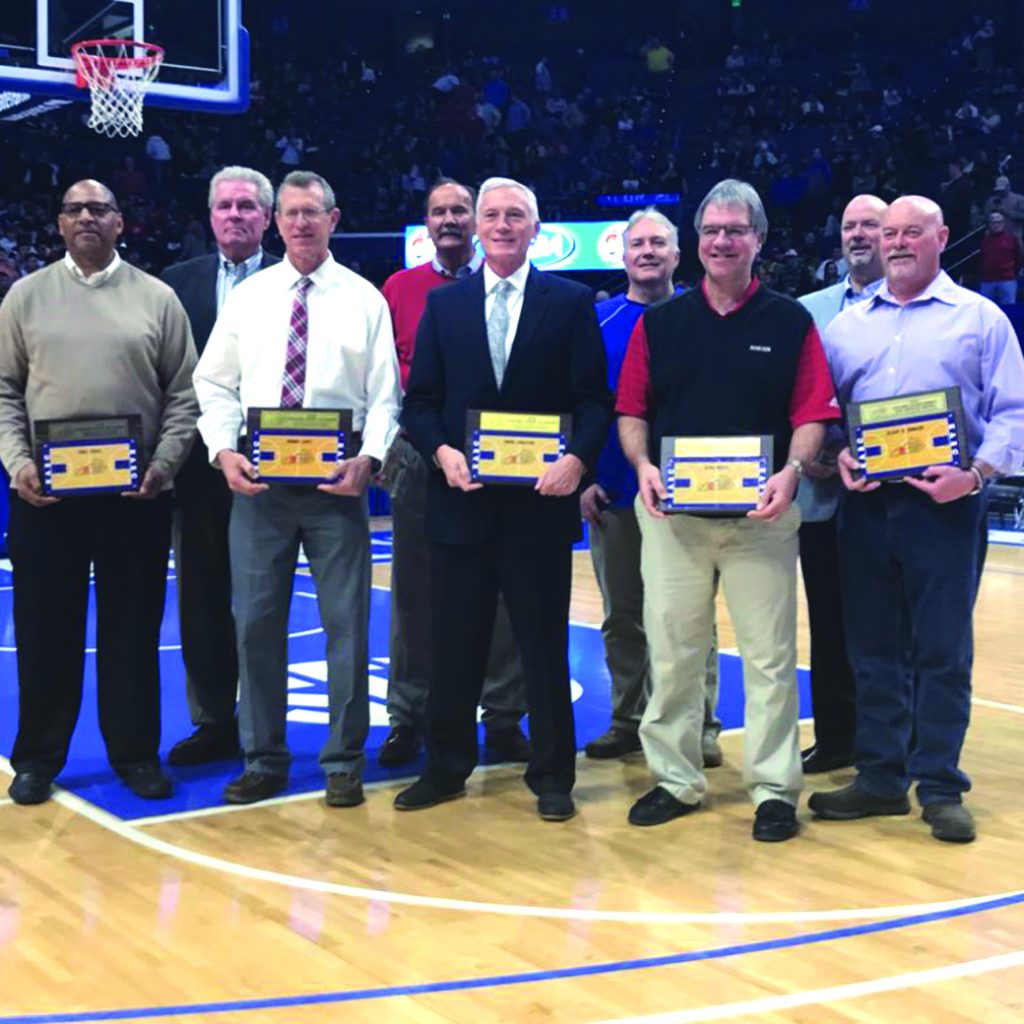 Former Burgin Head Coach Don Irvine (first row, second from right) is pictured with the rest of the inductees into the Coaches Court of Honor, during the Whitaker Bank Boys Sweet Sixteen on Friday, March 8, at Rupp Arena. (Photo Submitted)

Last week capped off a legendary career for one of the finest coaches in the area.

Irvine, along with eight other inductees, shined bright in one of the biggest arenas in the country.

“I was overwhelmed when I found out about a week before the district tournament, and didn’t even say anything to anyone because I was having a hard time grasping the concept that I was even considered,” said Irvine. “My family was thrilled for me, knowing how much something of that magnitude meant to me. I also had this feeling that I was, in a sense, sharing it with other small school coaches who worked for years, often in anonymity, who never got acknowledged for their achievements. My family sacrificed a lot during their lives for my career and so it was special for them to see also.”

Irvine said the support has been incredible.

“I am so happy for the people who have enjoyed my successes with me. I have made a lot of lifetime friends and companions over the course of 40 seasons who will always be special to me,” he said. “Every time someone says something supportive or comical or joyous about this occasion, or my career, it brings a smile to my face, because I want any legacy I leave on people to be a positive reflection about my schools, my players, and myself throughout the years. The amount of social media response I have received amazes me still.”

On Burgin basketball’s twitter page (@Burginbball), Irvine sent out a statement after receiving the award. The statement read: “It’s very overwhelming to me.  To whoever was responsible for my award, thank you from the bottom of my heart. To those who congratulated and celebrated with me. I am blessed to know you as friends and colleagues. To all the people I worked with and shared a court with me, and the players I had the opportunity to coach, God bless you for making this possible. Finally, to all the coaches and players who never got the recognition or the opportunity to be on the state tournament floor, please share this honor with me as a representative for all you have done.”

“I am just again overwhelmed at the amazing feedback that I received, even from people I had not seen or heard from in years. I was on the Rupp Arena floor with two or three guys I competed against over the years, who are good friends of mine so that was special too,” said Irvine. “The lady  in charge came up and told us it was time to clear the court. I told her ‘I don’t want to go, I like it out here’ and she responded with ‘No, you have to go now sir.’”