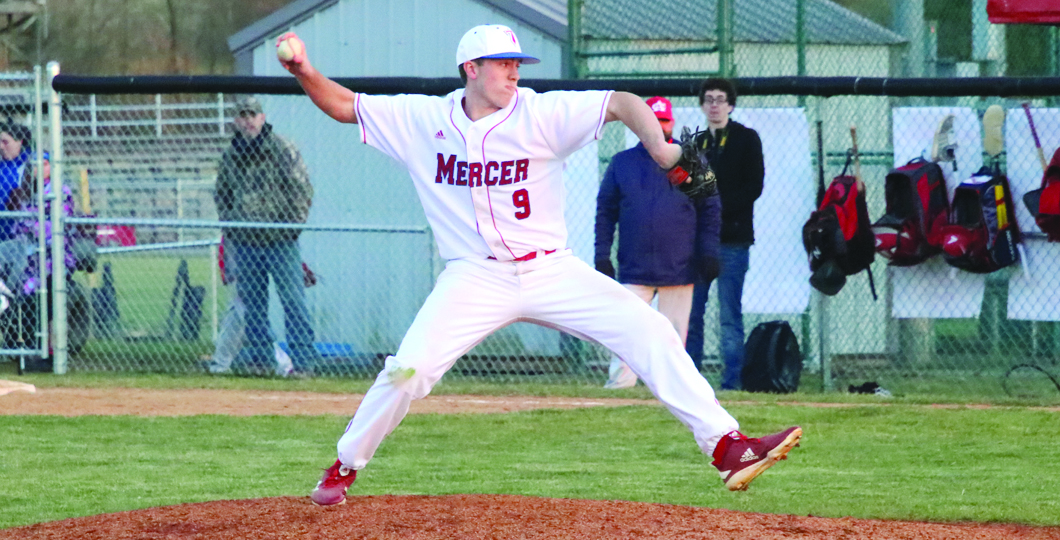 Sophomore Landon McGinnis earned the win on the mound, pitching two innings with four strikeouts, while also driving in the winning run on a walk-off hit-by-pitch against Anderson County on Monday, March 18. (Photo by Arpan Dixit)

There is no better way to open a season than a walk-off win, whether it’s by a hit or a hit-by-pitch. That’s exactly how the Mercer County Titans baseball team (1-0) earned their first win.

Sophomore Landon McGinnis stepped up to the plate, with the bases loaded, in the bottom of the seventh inning and patiently waited for his pitches before getting plunked to drive in the winning RBI against Anderson County (0-1) on Monday, March 18, in a 4-3 win.

“That was fun. I told them that we beat them in the scrimmage last week, and we just had to stay with our game,” said Head Coach Adam Shartzer. “Josh (Barnett) pitched a great game and Landon (McGinnis) came in and finished it out for him. Offensively, we were chipping away, getting runners on and it finally came to us in the last inning. I couldn’t be more happier for our guys.”

McGinnis also earned the win on the mound, pitching two innings, giving up no hits with one walk, and four strikeouts.

Austin Vincent took the loss for the Bearcats, pitching two and one-thirds innings, giving up three runs on two hits, with one walk and one strikeout.

Mercer County struck first after senior Cameron Warren grounded out to first, scoring junior Mason Smith from third in the bottom of the first.

The Bearcats battled back in the top of the third inning when Cameron Harrod singled to score Caleb Puckett, tying the game at one.

Bryce Hanks doubled later in the inning, scoring Cameron Auxier and Harrod to give the Bearcats a 3-1 lead after three innings.

Both Mercer pitchers worked out of big jams in the game.

“We had those moments in our scrimmages where our guys were working out of jams,” said Shartzer. “They had that experience of seeing this team before and it was great to see them come out of that.”

Sophomore Sam Baughman got his biggest hit of the early season, singling home senior Jamason Sherrow to make the game 3-2 in favor of the Bearcats.

The Titans had one last chance to tie or win the game in the bottom of the seventh.

Smith walked to lead off the inning, and was sacrificed to second by Cameron Warren. Junior Dillon Warren came up to bat and singled home Smith to tie the game at three.

After Sherrow was hit-by-pitch for the second time in the game, Warren advanced to second. Senior Nathan Tatum, after missing last season due to injury, singled to load the bases in his first full game.

Up to the plate came McGinnis, winning the game on a hit-by-pitch.

“It was a great team win for our guys,” said Shartzer.

The Titans will be back on the diamond today, Thursday, March 21, as they travel to Marion County to take on the Knights at 6 p.m. 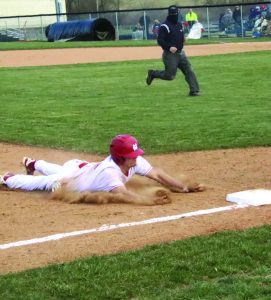 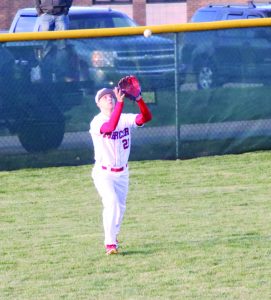 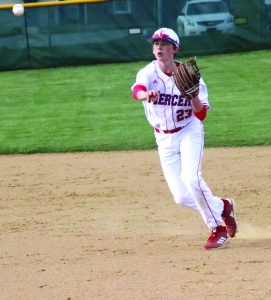 Mercer County sophomore Sam Baughman handles an easy grounder to second base in a 4-3 victory over the Anderson County Bearcats.